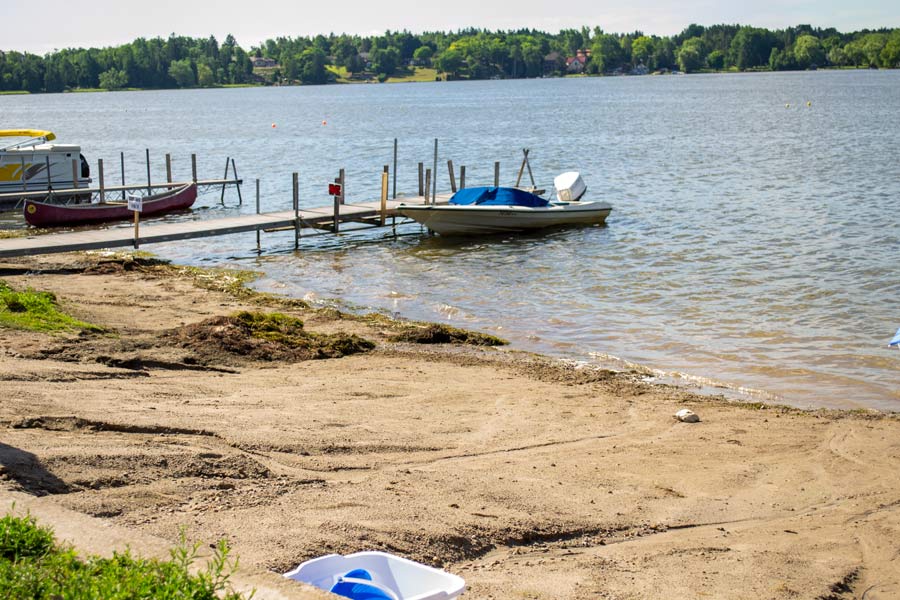 The McClintocks have closed the public access to Puslinch Lake at both McClintock’s Trailer Resort and McClintock’s Water Ski School due to an overwhelming influx of visitors this summer and a lack of respect for the space and lake. The beach and the boat launch are now closed to the public. Photo by Jaime Myslik

PUSLINCH – The only public access point to Puslinch Lake has been officially closed.

On July 15, McClintock’s Water Ski School owner Jaime McClintock announced on Facebook that the beach and boat launch is closed to the public.

The private property, owned by Jaime’s in-laws Sherron and Jeff McClintock, has allowed the public to access the small beach at McClintock’s Trailer Resort since the 1970s.

But the COVID-19 pandemic brought too many people to the area, creating a safety risk.

“It’s not really ever been a public beach,” said Jaime said in a July 20 interview with the Advertiser.

“We’ve allowed public access because it never impeded on the trailer park residents … this is their beach access.”

She explained the beach is probably big enough for 20 people comfortably.

However, recently the small beach has been filled with “people on top of people,” Jaime said, and tents were set up all over the property.

“Now you’ve got not just COVID safety called to question but public safety as well,” she said.

Jaime said visitors were tossing garbage in the bushes beside the Old Marina Restaurant and defecating behind the restaurant’s dumpsters when they were denied entry to its restrooms due to COVID-19 public health guidelines.

“So then [the restaurant has] to have their staff cleaning this up and just garbage everywhere, cigarette butts, beer cans, beer bottles, everywhere,” Jaime said.

“So trailer park tenants and ourselves were coming in and the restaurant staff were coming in to have to clean up after everything and that’s just not fair.”

The owners of the Old Marina Restaurant are not affiliated with the trailer park or ski school; they lease the building from Sherron and Jeff.

Jaime also indicated that some people staying at McClintock Trailer Resort said they might not return next year because they were unable to enjoy the lake due to the influx of public visitors.

“It just came down to the point where we’ve had decades of fantastic people coming out and then we just became so hyper exposed to communities far (away), like on the opposite side of Toronto, and that it just became a liability issue more than anything,” Jaime said.

She suggested the new interest in Puslinch Lake may be attributed to Justin Bieber’s presence.

When the pop star moved to the area, national media revealed the lake’s location and while the curious visitors remained relatively manageable, the COVID-19 pandemic brought outsiders to the small lake when many other beaches in the province were shut down.

Jaime said the McClintocks should probably have closed public access sooner, “But we tried to hang on for the fact that we knew that we had so many great people who have come to our property and have always respected it,” she said.

She noted, “they’re the ones picking up litter that they see left behind by other beachgoers.”

The McClintocks also closed public access to their boat launch. Some days this summer there would be hundreds of kayaks on the water as well as dozens of motorized boats from the public access point.

The boat traffic on the small lake was “chaos,” Jaime said, adding, “We’re like ‘okay, we don’t want to be held responsible for any of this anymore.’”

After Jaime posted the decision to close access on Facebook on July 15, the “keyboard warriors” came out and the McClintocks received numerous threats.

Some people even said they would boycott the Old Marina Restaurant.

“We felt really bad for the owners of the Old Marina Restaurant who have been nothing but sweet and kind and trying to manage all this craziness on the beach and their staff have really been going above and beyond, doing things that should not be part of their specific roles,” Jaime said.

She added her personal phone number was somehow made public and she received threats not only online, but through calls from blocked numbers. 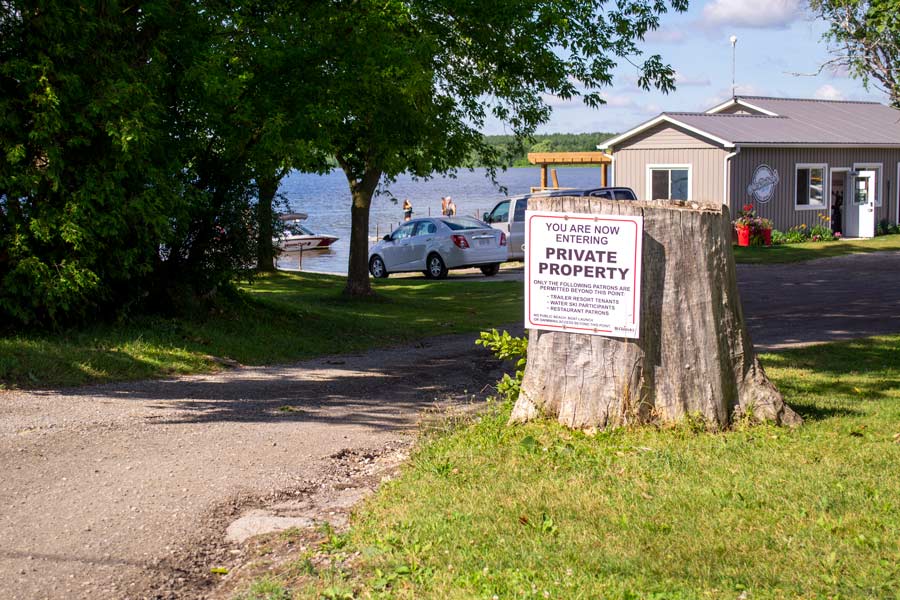 One of several signs on the McClintocks’ property reminding visitors the beach and boat launch are on private property. Photos by Jaime Myslik

“I think it’s important to note that a lot of the threats that we were getting were from people who had never even been to our lake before,” she said.

“People that said ‘I didn’t even know Puslinch Lake existed but you bet I’m coming there to prove a point.’”

The McClintocks contacted the police about the threats when a caller said, “‘I wonder how fast your house would burn with your children inside it’ … that for me was the done deal,” Jaime said.

The person could not be identified because they called from a blocked number.

That’s also when the McClintocks hired a private security company to help out.

This past weekend, the first following the decision to close public access, went okay, Jaime said.

“We did have the police out because of everything, just to be safe,” but apart from a few boaters and regulars, things were pretty quiet, she said.

She also said other Puslinch Lake homeowners thanked her and her husband Jason for putting an end to unsafe boating conditions.

“It was heartwarming to see how many [homeowners] were just appreciative that they could take their kids out again,” Jaime said.

At the July 15 Puslinch council meeting, Mayor James Seeley said he was “disappointed” to hear the public boat launch and beach access was closed, especially since the township has provided a grant to help pay for the dredging of the lake.

“I feel that a component of the grant funding … is that residents have access to that lake,” he said.

“So it’s unfortunate that whoever was doing the damage to the property, a few bad people, ruined it for everyone.

“But it’s also disappointing that there wasn’t some sort of mediation or something that could have been done to try to maybe educate people that this is private land please respect it or at least restrict it to strictly Puslinch residents.”

However, Jaime stressed that McClintock’s Trailer Resort and McClintock’s Water Ski School have never had an agreement with the township to provide public access to the lake.

The businesses are a completely separate corporate entity from the grant receiver, the Puslinch Lake Conservation Association. 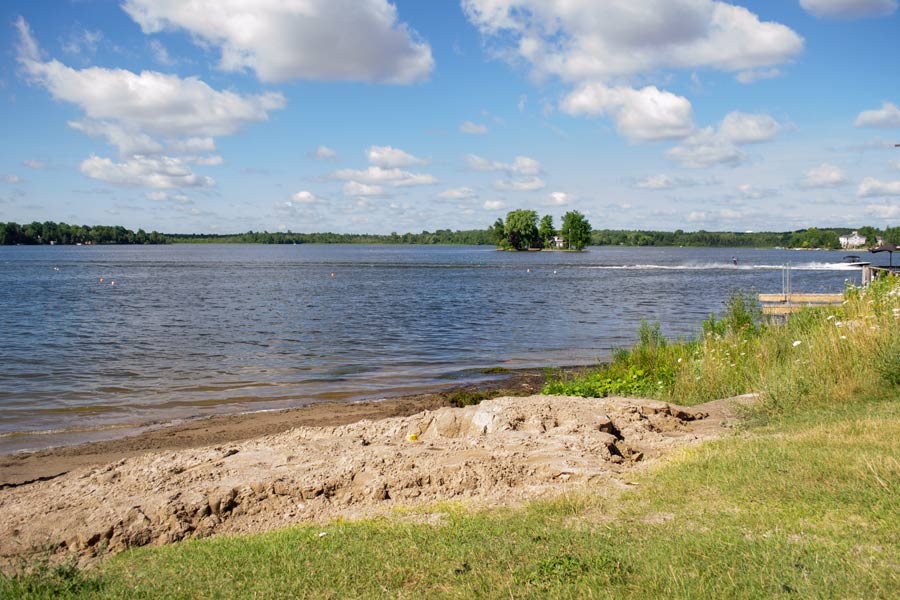 “Their primary focus is the rehabilitation of the lake, protecting the wildlife in the area and really conserving this natural resource,” Jaime said.

“So the township … granted them a grant to restore the lake through a dredging process.”

Neither the Puslinch Lake Conservation Association nor the homeowners on Puslinch Lake were involved in the McClintocks’ decision to close public access to the lake.

However, Jaime pointed out the ski school and trailer park would help the Puslinch Lake Conservation Association fundraise to maintain the lake if the township does not fund them in the future.

The McClintock’s are currently working on ways to improve access to the lake for communities not along the water.

“Right now, as a family we’re trying to come to what that looks like to be the most safe and the most respectful (plan),” Jaime said.

However, the type of public access experienced as recently as last week is gone forever.

“Any option of us ever looking to open something like this again was probably eliminated when we started receiving threats,” she said.

She added, “I think it’s just better for our family’s safety and the other families in the neighbourhood to keep it closed permanently.”