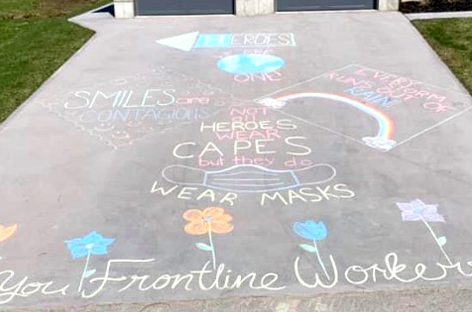 One of the drawings from last year’s "Chalk It Up" event in Mount Forest. Advertiser file photo

MOUNT FOREST – On May 15th, organizers from the Downtown Mount Forest Retail Committee are holding a “Chalk Up Mount Forest” sidewalk and driveway drawing event.

The event is being held in honour of Heather Aitken, who recently passed away at the age of 50 from a rare mitochondrial neurogastrointestinal encephalomyopathy (MNGIE) disease.

Last year, Heather and her husband Stu Husk held a similar “Chalk it Up” event to honour frontline workers.

Over 150 chalk drawings were involved, with residents creating supportive messages on their driveways.

The success of the first Chalk It Up spawned a second, months later.

In an interview with the Advertiser, Stu Husk reflected on what this year’s event means to him, as well as his thoughts on the success of last year.

“Last year’s (Chalk It Up) was all about frontline and essential workers,” said Husk.

“This time, Amanda Boylan and Crystal Seifried suggested putting on a chalk event for my wife,” Husk said.

“Last year was a huge success. We had the fire department, police, and multiple television stations involved.

“This is what she (Aitken) would have wanted.  She always wanted to bring people together however she could.”

Husk said for last year’s Chalk It Up event Aitken, a very active member of the community, bought all of the chalk from a local store for people to use.

“She was very generous – helping kids out, being involved in so many ways. She volunteered in a school breakfast program,” said Husk.

“She passed away three weeks ago, and I’m still getting cards.” 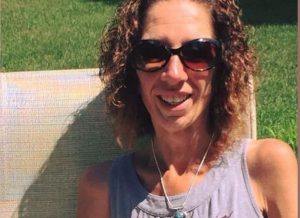 Last year during Chalk It Up Husk and Aitken provided 100 pizzas for participants each time.

“She just wanted the kids to be happy,” Husk continued.

“She didn’t mind spending $1,000. She bought winter clothes for Wellington Heights’ Warm Winter Wishes Program, and gave out NHL hats to kids at local hockey games.  She once bought 500 fidget spinners at a yard sale just to give them all away to kids.”

Husk said for this year’s event, people can create chalk messages in honour of Heather, or create anything else they would like.

“Draw anything you’d like in the morning, we’ll come out and judge (the drawings) in the afternoon,” Husk said.

“I’m putting one in the driveway for Heather.”

This year, the Downtown Mount Forest Group has several prizes planned for participants.

Amanda Boylan, from the downtown Mount Forest Retail Committee, said they have put together gift baskets and other prizes for kids to win for their hard work.

“We’re asking that everyone chalk in honour of Heather,” Boylan said.

“Heather was so well known and cherished in our community. This time last year, she put together the Chalk It Up event for … our frontline workers.

“We are going to run with the same event, except this time honouring her by drawing pictures and messages thanking her for all she had done within this community.”

Boylan is also encouraging people to draw green ribbons, as well as messages of support for Aitken’s family.

“Draw green ribbons, ‘we miss you’s’ and messages for her to look down and see,” said Boylan.

“Let’s all come together and ‘Chalk up Mount Forest’ for our friend, Heather.”