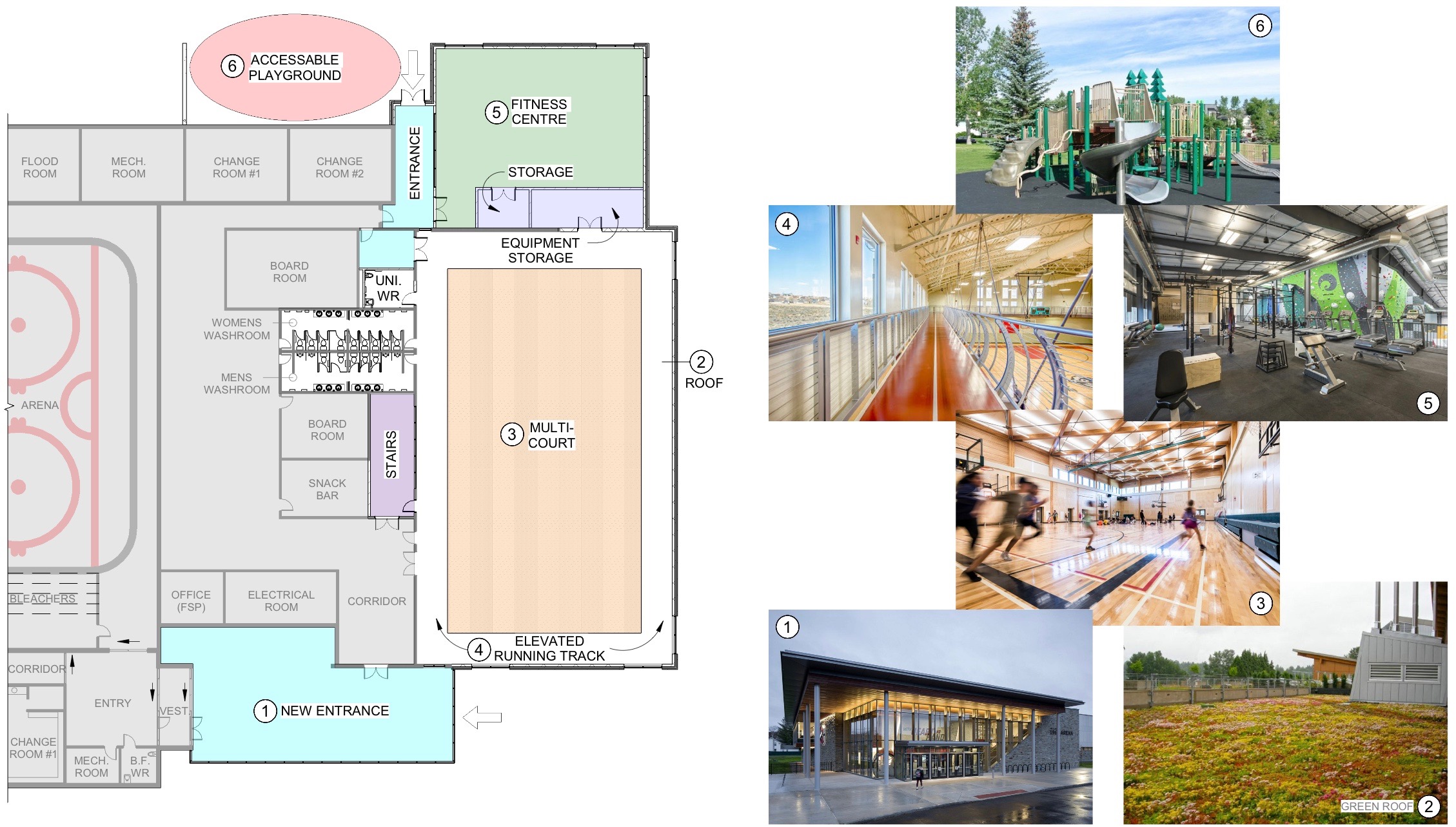 Architect's drawing and photos showing the various components of a proposed renovation of the PMD Arena in Drayton. (Mapleton agenda image)

MAPLETON – Plans for a major makeover of the PMD arena in Drayton were discussed during the May 25 Mapleton council meeting.

Township CAO Manny Baron explained the municipality is investigating an application to Infrastructure Canada’s Green and Inclusive Community Buildings Fund to cover much of the cost of the proposed upgrades.

“Up to basically $10 million, less a dollar, we would be funded for 80% of the cost of the project. And if we decided that we want to go anywhere from $10 million to $25 million, it would be 60 per cent, funded from … the federal and provincial government.”

Baron added, “So we would like to get this, I guess, all figured out and finalized so that we can provide the application in July or sooner … We just thought ‘let’s take advantage of this.’ It’s a great project and I think it’s much needed.”

Laurence Cudlip, senior director of architecture for CIMA, a consulting firm assisting with the application, said the proposal as presented at the meeting is aimed at an application below the $10-million benchmark.

“Without getting mired into the dollars, the benchmark we’re looking at is $10 million … sort of the envelope that we have to work with,” said Cudlip.

“The major components of what we’re proposing here, have to do with new programming new spaces, that would add to the building.”

Major components of the revamped facility would include a large multi-use court for basketball, volleyball, pickleball and other sports, as well as an elevated walking track and a fitness centre.

Outdoors, a new accessible playground is under consideration.

A large addition to the south side of the existing building is a major component of the plan.

“So the existing hall, community hall, or multipurpose room would disappear and we would build new and that new building would be basically a two-storey structure with sufficient height to accommodate the programming needs inside,” said Cudlip.

The project would include a new entrance area at the back of the facility with a drop-off area as well as another covered drop-off area added at the front of the arena.

A photovoltaic charging system for electric vehicles would also be part of the upgrades, fitting in with the energy saving designation.

A redesigned entrance area would bring a modern look and further energy efficiency elements to the project, Cudlip explained.

“Facing Main Street we see this entrance piece as being a fairly contemporary architecturally glass box with sort of a roof piece that would have some presence to help animate and bring the elevation of the building into a lot more contemporary view ;much better street presence, much better visibility,” Cudlip stated.

“And being fully glazed, would allow for a lot of animation, you can see people coming and going. It’s going to be a great place to have not only large groups pre-gathering if they needed to, to disperse into other parts of the building, but also could be a venue for any day where you’re having a trade or a vendor show. You could have kiosks and whatnot … a sort of entry greeting area here.”

He added, “The main built pieces, again, no particular order would be the multi-court, two-story functional piece … and then added onto the back of that would be a multipurpose room which could be divided up into two halves with a moveable wall, fairly large rooms that could accommodate, of course, a number of different functions, hence the name.”

Cudlip noted an addition “to accommodate the figure skating club” is part of the new design as well.

He said further direction is needed on what type of kitchen facility would be included in the building.

The proposed second story track would be at a 12-foot elevation and offer full visibility onto the court area below. Access to the upper areas would be by stairway “and of course by the elevator, with its own small elevator lobby, which is also a code requirement,” said Cudlip.

“The other spaces within the second floor here include a series of boardrooms. These could be divided with moveable partitions, if there was a demonstrated need to have a very large room up here that could, and might need to be, divided up that way. Or these could be fixed, hard partitions.”

Cudlip noted, “These are fairly large rooms that would accommodate a number of people, for whatever purposes are unnecessary, and then we’ve created a fair bit of circulation space again (for) when you may have multiple sessions happening.

“So all told, we’re looking at a total new build of approximately 21,000 and change square feet and about 6,700 square feet of renovation space,” Cudlip estimated.

“The main goal is to provide the enhanced programming through these spaces and provide an enhanced aesthetic to the building to bring it up a more contemporary standard.”

Councillor Dennis Craven asked if a second floor area overlooking the ice surface was part of the plan.

“We didn’t include that. It’s a little distant,” Cudlip replied.

He noted that while “it wouldn’t necessarily be impossible,” due to potential cost issues “we’ve tried to stay away from adding any second floor components over the existing building.”

“Everyone I’ve discussed this with so far is very excited, but there is concern that we wouldn’t really be able to host things like the (Palmerston and District Hospital Starlight) gala, and the (Drayton Kinsmen) farm show without a usable kitchen to serve people out of,” she explained.

Mayor Gregg Davidson said, “I agree with counsellor Ottens,” adding a larger kitchen could be marketed to local businesses for commercial food production.

Councillor Michael Martin said he is excited about the new entrance, suggesting “Having something kind of modern looking, versus the Third World structure that’s there at the moment is pretty exciting.”

Martin said council should consider including some other major amenities before making any decisions.

“If we’re still in the creating ideas phase …I don’t think we should be ruling out the second ice pad right off the top, without actually having numbers,” he said.

“You know, there’d be an option for a pool, that type of stuff I’d love to see. And that would fundamentally alter the design of course, as well. But I’d love to see some high level numbers … like, if we push the $10 million, how our finances relate to that.”

Martin was less enthusiastic about including a full kitchen in the design.

Otten said she believes the kitchen would be used regularly by groups renting parts of the facility.

“There’s the farm show, these are all annual things. And then there’s the future potential of dance, karate, gymnastics.

Davidson asked if the addition of a pool or a second ice pad would put the project beyond the $10 million benchmark.

“I guess the short, not politically correct answer is yeah, it would put you over,” replied Cudlip.

“If you were going to do all of this, if you’re going to make these additions that we’re showing now, plus add an ice pad, never mind a pool, that’s a whole different ball of wax.”

Cudlip suggested the project as presented would cost “right around the $9 million mark.”

Davidson asked if the multi-courts included “any space at all for people to watch?”

“The way we’ve laid it out right now? No. But it wouldn’t be too difficult to stretch one side versus another, to create either compacting roll out bleachers or a fixed bleacher to allow for a little more visibility,” Cudlip suggested.

Council accepted the CIMA presentation for information and asked Cudlip to return to the June 8 council meeting with an updated design.

Council is planning an online public meeting on June 1 at 7pm to give local residents an opportunity for input into the proposed changes. Public access information can be found with the agenda on the municipality’s website.

The township is also conducting an online survey. To participate go to https://www.surveymonkey.com/r/PMDarena.