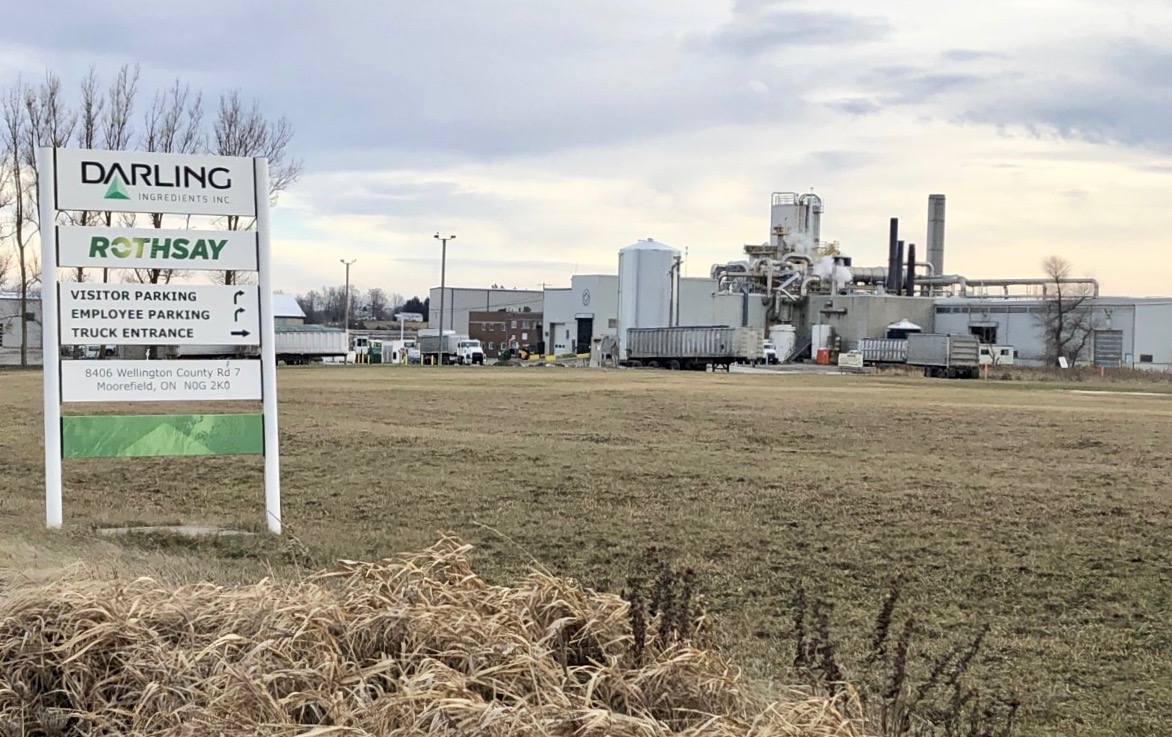 MAPLETON – Mapleton Township will provide a letter recognizing the importance to the agricultural industry of the Darling Ingredients rendering plant at Rothsay.

The letter will be read by Mayor Gregg Davidson during the company’s appeal before Ontario’s Environmental Review Tribunal.

As part of an upgrade to the facility to expand poultry processing capacities, a new ECA (Environmental Compliance Approval – Air) has been issued to the facility by the Ministry of Environment, Conservation and Parks.

“The amended ECA places certain conditions on Rothsay’s operations, notably new odour emission limits, that may not be (consistently) achievable and thus may result in stoppages, interruptions and/or reductions at the Rothsay Moorefield Plant, which has potential to have significant impacts on the agri-business sector we serve,” states a Dec. 11 letter from plant manager Duff Moore to municipal councils in Mapleton, Minto and Wellington North.

“Shut-downs, permanent or temporary, or other operational limitations or interruptions, will impact agribusiness supply chains and the direct and indirect employment base for many” in the three municipalities, the letter states.

“It will also cause a chain-reaction in the meat and animal supply chain – both upstream and downstream of Rothsay.”

Parent company Darling International Canada has filed an appeal of a Director’s Order, which is currently pending before the tribunal.

As part of the appeal process, the company will be presenting arguments to the Environmental Review Tribunal that “will include the significant impacts and importance of the facility/business to the local communities and to the agribusiness industry overall,” stated Moore in the letter.

The letter asks the municipalities for support for Moorefield Rothsay, Darling International Canada Inc. “with respect to the benefit of its critical agri-business operations.”

At meetings on Dec. 14 and 15 respectively, Wellington North and Minto councils agreed to provide a resolution acknowledging the positive impact of the Rothsay rendering plant on the local economy and agriculture industry.

“We are very much in support of Rothsay as a company,” Davidson told the Advertiser in a Jan. 13 interview.

“We have agreed to provide a letter to Darling Ingredients on the importance of what they do in the agricultural industry.”

“They do 10 million pounds per week of carcasses of animals that go through their plant. That is huge. That’s a huge thing for the industry … to have that kind of processing plant,” noted Davidson.

“They get material from 800 farmers in Ontario … If they shut down it’s a huge hit to the industry.”

Davidson said the company asked the township to be represented at the tribunal meeting.

“I will be on that meeting of Feb. 19 to read out a letter of support for Darling Ingredients,” Davidson stated.

Moore, who appeared as a delegation at the Jan. 12 meeting, noted that while the plant is expanding its capacity for processing poultry, it is not physically enlarging the facility.

“We didn’t add any footprint or building structure to the facility,” he said.

“What was changed was the poultry processing capacity was increased by putting in a new cooking system. So within the same footprint we changed the principal cooking equipment to keep pace with the industry growth.”

Councillor Paul Douglas asked if the amended ECA imposed on the company is “more strict” than the plant’s current ECA.

Moore said the revised ECA has impacted the company in a number of ways, “most specifically a five-fold decrease in the odour performance management limit placed upon the facility.”

Moore said the new system should actually improve the odour situation around the plant, as it will allow for faster processing and indoor storage of materials.

“The ability to process faster allows us to keep fresh material as it’s coming in, to avoid backlogs of trailers,” he explained.

“The expansion was a new cooker to increase capacity so that material doesn’t backlog. We are able to keep raw materials within our storage facility that’s under bio filter control and essentially improve our odour performance.”

Moore added, “Unfortunately the odour performance limit that was placed on our facility is fraught with inconsistencies.

“And to accept that in the ECA would essentially put us at risk of not being able to meet it and being out of compliance.”

Douglas asked, “So the neighbouring residents wouldn’t really notice any increased odour as a result of any of your changes?”

Moore replied, “The community should experience less upset conditions with backlog of material based on the new process, but (that is) not reflected in the performance limit of the annual odour compliance.

“We believe the actual odour impact to the community will be improved.”

Moore also noted the company is currently in the process of establishing a public liaison committee to deal directly with complaints.

“We have a robust complaint system. We would encourage the community to phone us directly so we can respond in real time,” he stated.

Moore said the company has dealt with about 15 odour complaints in the past year, but faces a challenge in responding under the current system, in which complaints come through the Ministry of Environment, Conservation and Parks.

“We don’t get calls directly to the facility, so we’re often chasing four-, eight- and sometimes 24-hour-old reporting of an odour,” he told council.

Councillor Michael Martin asked, “In your worst case scenario, what would be the financial price tag to your company to get into compliance?”

He said the company spends about $5 million a year “on capital system upgrades or environmental improvements” and has spent about $30 million in recent years to upgrade systems.

However, Moore said, “We’re not sure there is any best available control technology to meet the odour limits that are being put on us in the ECA, so I can’t put a price tag to it.

“I can put a question mark, in that we don’t know if we can meet it.”

“If you’re saying nothing exists to do what they want, what are they suggesting?” asked Davidson.

“Move to the middle of nowhere,” replied Moore.

He said, “We’re not abdicating or trying to duck our responsibilities, period.

“We believe we are the sustainable method to manage by-products and keep agriculture going … and we do it in some of the most responsible ways possible.”

“What happens if you’re unsuccessful in your appeal?” asked Douglas.

Moore said, “We have no intention to shut the plant down. We’re investing heavily. We spent $10 million at the plant this year for this system.

Davidson noted it would be a “huge, huge problem” if the plant were to shut down.

Council accepted the presentation as information and agreed to provide a resolution of support for the company to use during the Environmental Review Tribunal process.

Council also authorized Davidson to read a letter of support from the township during the tribunal meeting.