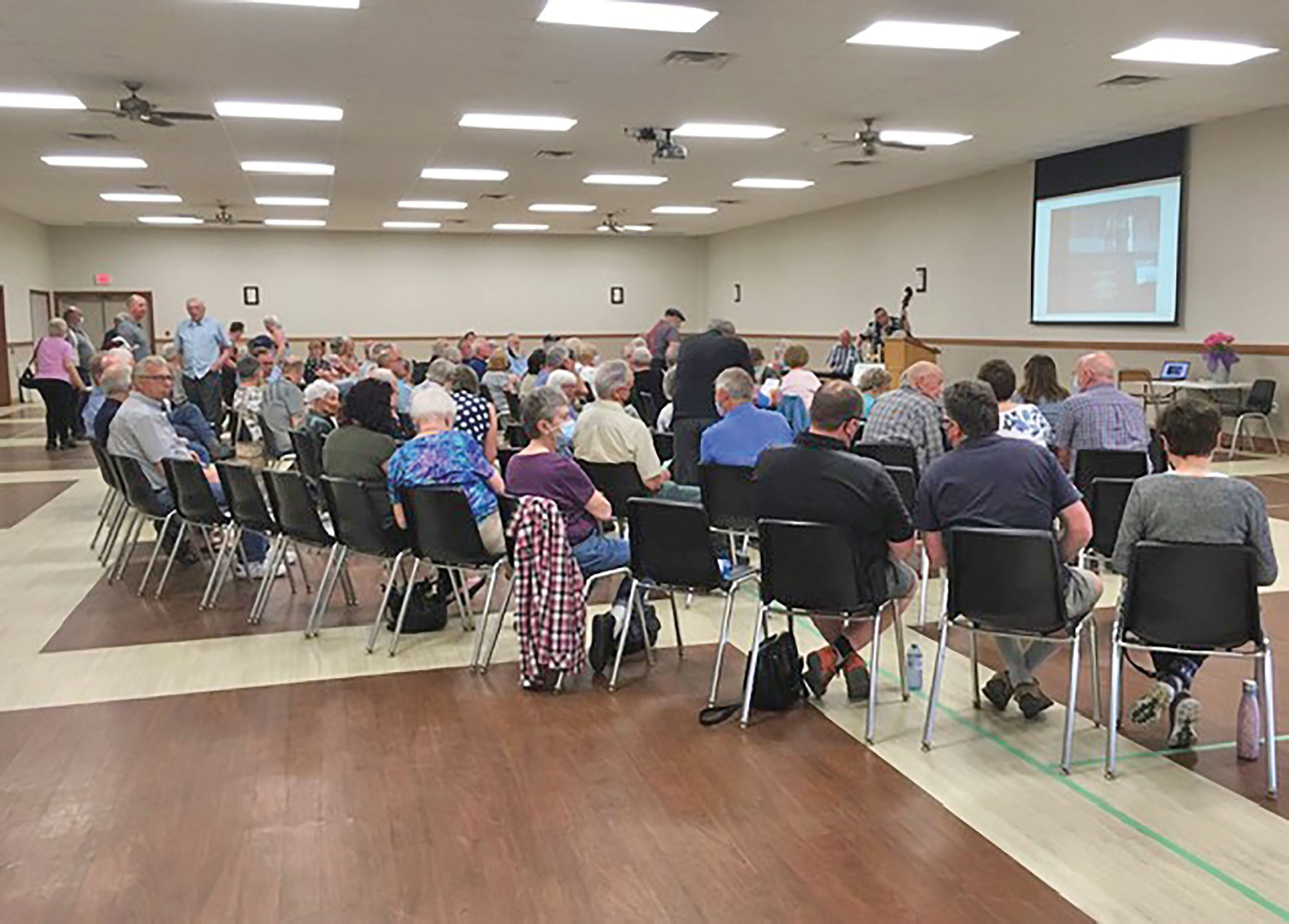 Presentation – People are seen at the Mapleton Historical Society’s presentation about Conestogo Dam on May 13 at the Drayton Arena. Photo by Marlene Ottens

DRAYTON – About 200 people attended the Mapleton Historical Society’s presentation on May 13 about the history and building of Conestogo Dam. In addition to long-time local residents and people who grew up near the lake, there was a large contingent of cottagers present.

Bob Stanners, whose father Andy was the operator of the dam and superintendent of the conservation area for many years, was the guest speaker.

He shared stories and memories about how the dam was built, troubles encountered along the way, and nuts and bolts information about the workings of the dam and how it helped with flood prevention down river. Many in the audience chuckled and murmured in recognition when Stanners mentioned names of people involved or affected by the project at the time.

Conestogo Dam was built in the 1950s as part of a greater endeavour to prevent flooding. Several thousand acres were eventually involved in the project, which included creating conservation forests and recreation areas. Farms, homes, and a large part of the town of Hollen were lost when the lake was formed, and not everyone affected was happy about it.

Now the dam has created a large water reservoir used for boating, fishing, swimming and cottages. There are campsites on the upper and lower levels, and many area youth have summer jobs at the conservation area.

Stanners also had a fascinating slide deck (with hundreds more in his archives) showing activity at the dam over the years. He and his wife, Karen Smart, also brought their extensive collection of photos and memorabilia, including the original blueprints of the dam, which were generously loaned to them by the GRCA.

Marlene Ottens thanked Stanners for his “interesting and engaging” presentation. She commented that her father helped to build the dam and lost his wedding ring while pouring concrete, prompting Stanners to comment, “There’s gold in that dam!”

The meeting was opened for audience members to ask questions and share their own stories. The evening included live music by Dunc Lamond and his “barn dance” band, refreshments, socializing, and an opportunity to look at all the photos and memorabilia on display.

The presentation was video-recorded and will be uploaded to Facebook and YouTube when it is edited, for those who were unable to attend.

The Mapleton Historical Society thanked everyone who attended and hopes to have more people join the committee so more of these informative community events can be organized. The next meeting is on June 6 at 7pm at the Moorefield Hall and anyone interested is welcome to attend.