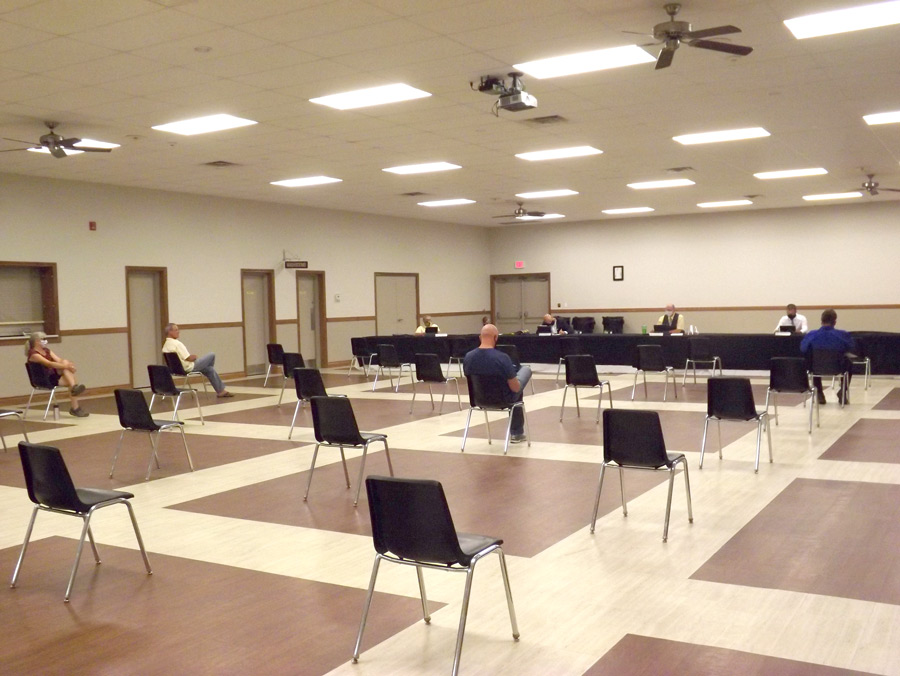 Mapleton’s July 30 special council meeting at the PMD arena was the first in-person council meeting held in Wellington County since emergency measures were implemented due to the COVID-19 pandemic. Councillors and members of the public wore masks and were seated six feet apart to conform to current restrictions. Photo by Patrick Raftis

MAPLETON – A proposal that would have seen the township outsource construction and operation of municipal water and wastewater infrastructure has been scrapped and council will instead look at borrowing against its own reserves to finance the project.

In 2019 Mapleton Township issued RFPs inviting companies to invest in and propose solutions for the township’s water and wastewater facilities.

On July 15, 2019 the municipality announced the Canada Infrastructure Bank (CIB) had committed to a $20-million debt financing package.

The offered loan was intended to help companies currently bidding on the project, as the township extended the CIB financing option to all RFP applicants.

If the successful RFP applicant made use of the debt financing package, it would pay two per cent interest for the first five years and 3% afterwards over a 20-year period.

The CIB is a federal crown corporation with a mandate to invest $35 billion in new infrastructure projects.

A report from CAO Manny Baron presented at a special council meeting on July 30 explained that in April of 2019, Mark Rodger from Borden Ladner Gervais (BLG) sent a request for qualification (RFQ)based on a regulated model dealing specifically with municipal water/wastewater systems in Ontario.

“This was a very interesting concept as it shifted the financial risk on to proponents and also created a way for Mapleton to finance the infrastructure needed to help Drayton and Moorefield meet the current upgrade demands and help plan for future growth,” stated Baron in the report.

On July 15, 2019 BLG, on behalf of the township, sent out a request for proposals to six pre-qualified proponents.

The RFP process was on an invite-only basis to proponents that were approved by council pursuant to the evaluation and scoring criteria set out in the RFQ.

Three proponents responded to the RFP and the bids were evaluated internally. Mapleton asked for an external technical review of the bids to ensure the proposed technology would meet Mapleton’s needs, the report explains.

The report notes there were some legal issues contained in the preferred RFP that could potentially place Mapleton at risk.

“With the advice of our legal council we decided to go ahead and look at negotiating one bidder. There were clarifying questions going back and forth and once we received their answers it became evident we needed a financial analysis.”

At the July 30 meeting, held at the PMD arena, council received Baron’s report on the Mapleton water/wastewater RFP and directed staff to inform BLG’s Rodger of the direction it wishes to take.

“The RFP process has been cancelled and we’re going to re-evalute what the township needs to do to move forward and that recommendation will come Aug. 11,” explained Baron in an interview after the meeting.

Both Baron and Mayor Gregg Davidson told the Advertiser the financial analysis indicated self-financing was more advantageous to the township than proceeding with the RFP.

“I think council’s made the right decision and that’s to go forward on our own. Our financial situation changed and we’re able to borrow from ourselves, which is actually going to save us more money than if we went with the RFP,” Davidson explained.

Baron said, “The analysis has been done and it makes sense and I’m assuming that’s going to be part of the recommendation on [Aug. 11] in an overall bigger package of what technology we’re going to use, who we’re going to use to be the engineer and how we’re going to, I guess, move forward.”

“We need it … The water tower has to go up at some point real shortly but, depending on when growth comes in, we can decide on when the infrastructure to deal with wastewater goes in. It could be 2026, it could be 2028, but we have to measure that,” he explained.

Baron said the township is in a good position for growth for the time being.

“We have 217 units that are allocated already to the builders and to the industrial park and so we’re good for a few years now and if growth slows then we won’t need to finish that allocation.”

Davidson said the attention the unique RFP concept and CIB involvement generated from media and the international business community have been worth any related expenses and legal fees.

“All our business park is now full. We’re looking at expanding that. There are businesses contacting us all the time. There’s businesses buying other pieces of land so they can build. Mapleton’s on the map. And for housing it’s just starting as well.”

He added, “When you get phone calls from England asking what’s going on in Mapleton, Ontario it’s pretty significant and that’s what we had going on during this RFP process.”