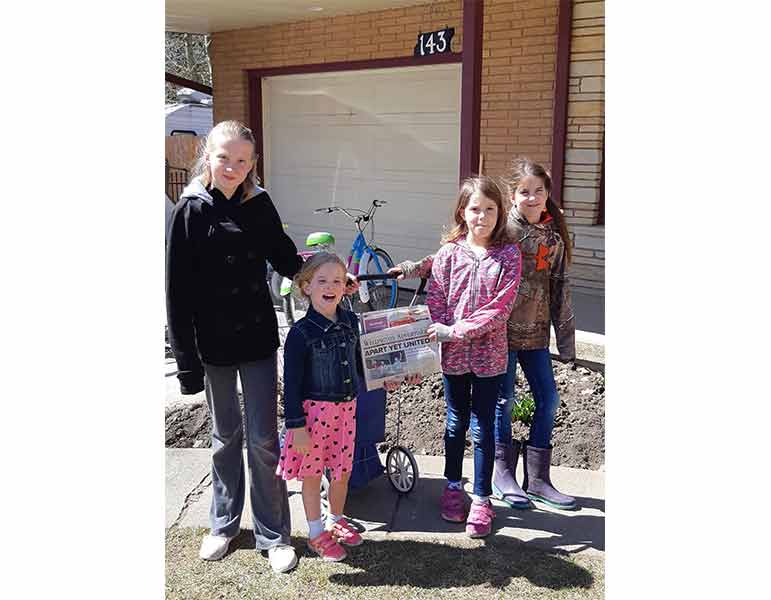 Helping out – Four young newspaper carriers from Arthur are donating their paycheque this month to the Groves Hospital Foundation. From left: Emmalee DeWitt, 12, and sisters Taliah, 4; Vanessa, 8 and Alyvia, 10. Submitted photo

ARTHUR – Four local newspaper carriers are donating their paycheque to the Groves Hospital Foundation as a personal response to the COVID-19 pandemic.

Members of the DeWitt family have been delivering the Wellington Advertiser since 2012.

The girls’ mother, Cathy, contacted the newspaper’s circulation department last week to say her daughters wanted to forego their pay and continue to deliver the paper as a way to help the Advertiser during a difficult economic time.

Advertiser publisher Dave Adsett expressed his appreciation to the girls, but told them they would still get paid.

That’s when the girls decided to donate the money to the Fergus hospital.

“The girls realize that God has blessed us so much, they wanted to do something to help in the community,” said Cathy.

“Many of the people on our route have been an encouragement to the girls with friendship and gifts. Donating their paper route money to Groves Foundation during this difficult time just seemed to be the perfect way to bless others.”

Cathy noted the girls are donating this month’s pay and would consider future donations as the situation develops.

“We actually know a couple of doctors; they’ve got a young family and they’re out there every day putting their family at risk,” said Cathy.

“We just wanted to help someone else and this is a way they could do it.”