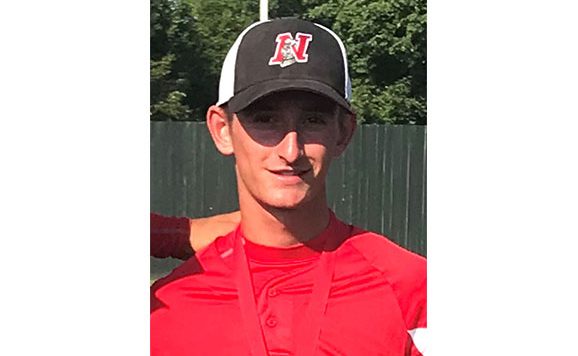 MOOREFIELD – Tyler Franklin has been shining on and off the field throughout 2021.

Now enrolled in his first year as a business administration and financial math student at Wilfrid Laurier University, Franklin was recently named a recipient of the Ontario Amateur Softball Association (OASA) 2021 scholarship.

The scholarship rewards the scholastic and academic excellence of OASA players at the U19 and U23 level who are enrolled in either a community college or university.

“It was sweet. It’s a little award to keep players in the game, so it’s definitely a good incentive to keep going,” Franklin said of the scholarship.

“I started playing ball when I was very young. Including T-ball, I’ve been playing ball for almost 15 years.”

The second baseman grew up near Moorefield and attended Norwell District Secondary School.

He began playing softball in Moorefield and would later go on to play in Palmerston, before joining the Napanee Express in 2019.

In Napanee, Franklin won a national championship with the Express in 2019, and in 2021 the team won both the provincial and Eastern Canadian championships.

“Napanee picked me up for a tournament in Quebec,” Franklin said.

“It has a really nice, small-town feel and I like the way the community gets behind the team.”

Even with all of his team’s success, Franklin maintains that winning championships and awards is not his favourite part about the sport.

“For me, it’s been all about the relationships I’ve built along the way,” he said.

“The social aspect of the game is a lot of fun.”

But he’s also dealt with his share of injuries along the way as well.

“I had shoulder surgery the year we won nationals in Palmerston. I came back two weeks before nationals,” Franklin said.

And at age 15, he suffered a broken ankle. After suffering two major injuries close together, he coached hockey for a year, a sport which he also played growing up.

Franklin said next year he plans to return to Napanee for another season of softball, but for now he is trying to make the best of his first year of university, which has been impacted by the pandemic.

“It really was an adjustment with all of the online stuff, so in my first year I haven’t really gotten the full experience yet,” he said.