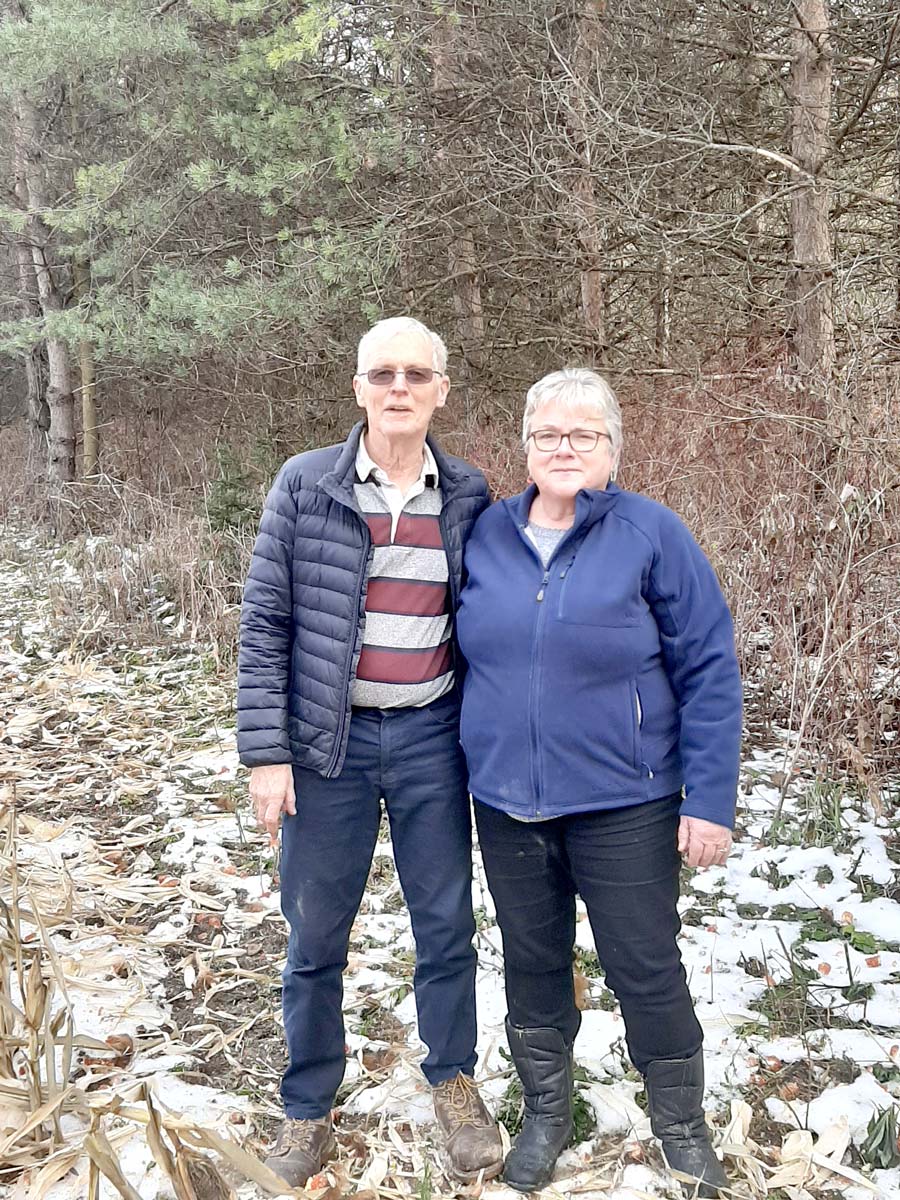 Tree huggers - Liz and Reg Samis of Mapleton have been recognized with the Agricultural Award of Excellence. County of Wellington photo

GUELPH – Liz and Reg Samis of Mapleton were recognized with the Green Legacy Agricultural Award of Excellence at the Nov. 28 Wellington County council meeting.

With the award, Green Legacy aims to recognize farmers who have demonstrated strong environmental leadership by promoting the value of trees on farms and re-examining their farm practices to engage in up-to date methods that support good land stewardship.  In the last 40 years, Liz and Reg Samis have planted over 25,000 trees on the farms they have owned. The couple planted trees on an estimated 30 to 40 acres of the 550 acres farmed in windbreaks, stream buffers and forested lands, while acting as leaders in their community to endorse healthy farming practices.

Self-proclaimed “conventional farmers” the Samis’ have owned four farms, including a commercial farrow to finish hog operation producing 6,000 hogs per year as well as the cropping operations. For a period of  time they had beef cows and a small feedlot. Understanding the toll that farming takes on the land early in their farming careers, they were open to looking at the benefits of trees for protecting their top soil and waterways. Adding trees to their farms resulted in decommissioning two pastures along the Conestoga tributary and installing a riparian buffer. Trees now shade the water, prevent runoff and livestock from entering and contaminating the stream. The five windbreaks planted on their farms have contributed to average or better than average annual yields and they have plans to install two more. To manage existing forests, the Samis’ hired professional foresters, Williams and Associates, who were also employed to increase and create additional naturalized areas. They reduced their tillage well over 20 years ago when Reg attended a soil conservation training. Their new practices resulted in becoming one of the earlier farms with residue left in their fields and more trees on their farm and led to conversations about evolving farm practices with members of their community.

“We must also commend Liz and Reg for their activity within community,” states a press release from Green Legacy.

Liz, who is a University of Guelph Graduate in Animal Science was a member of Trees for Mapleton at its inception in 2006, served for a time as its chair and has continued to sit on the committee for the past 15 years.  She was the provincial director representing Wellington County and sat on the environmental committee for Ontario Pork. She was the business development workshop leader for Growing Forward and presented Environmental Farm Plan workshops, programs administered by the Ontario Soil and Crop Improvement Association. She was the national chair of the Quality Assurance Program for Food Safety for the Canadian Pork Council and is presently active with the local historical society.

Reg, who has completed every edition of their environmental farm plans, is the director of the Senior Citizens Association for the Conestoga Crest Retirement Home and a member of the Wellington County Soil and Crop Improvement Association.

The Samis’ explained the value of being active lies not only in giving back to your community, but also in connecting with other farmers and learning from one another. Being a part of groups like Soil and Crop Association has been a real benefit to them. When planting trees on their farms, they recruited and engaged the community, inviting the local Scouts and Guides to come out and plant with them. They expressed the importance of children planting trees in their community and the joy that they get from seeing the kids undertake the work and pride in watching the trees grow.

The couple say it was their own kids that got them going and now their grandchildren are enjoying the trees that they planted. Their daughter’s family now owns and operates one of the farms and receives the benefit of trees planted early in Liz and Reg’s career.

“We have a part to play and I think we can do more,” says Liz, when considering the environmental protection projects that they have  accomplished on their farms.  Explaining that each farm is unique and “it is each farmer’s job to evaluate their own farm and find solutions that benefit both the environment and their operation,”

Liz and Reg are still farming two farms and rent land. “The trees on our farm are our legacy,” said Liz.

“The County of Wellington’s Green Legacy Program, applauds Liz and Reg of Samis Farms for their commitment to good agricultural practices and information sharing with a long-term vision to produce healthy food and protect our environment,” officials state.

Two other Green Legacy awards were also presented at the meeting. 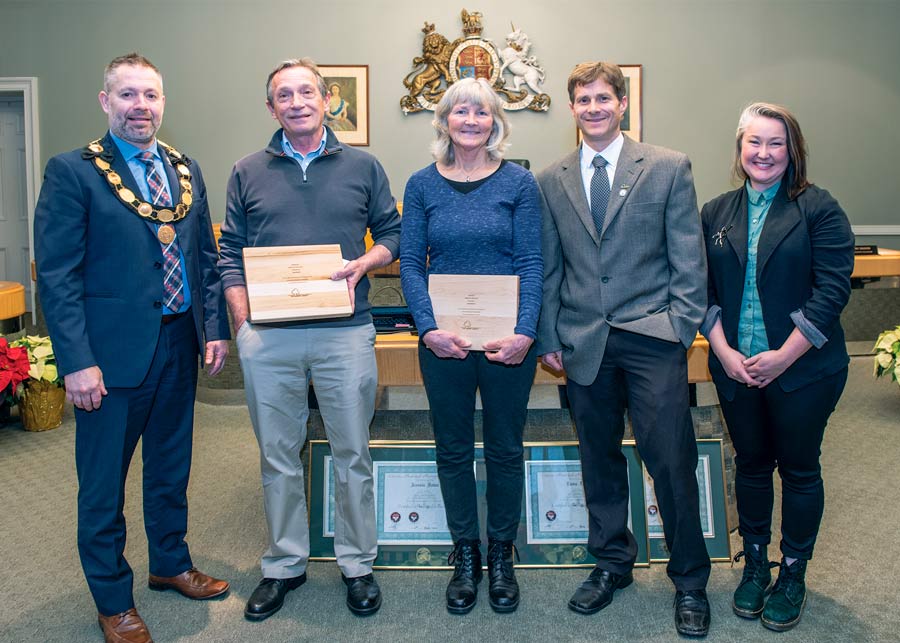 With the closing of the Ontario Tree Seed Plant, Green Legacy’s workload to collect the seeds needed to grow trees increased significantly.

“Since a tree nursery is only as good as its seeds, thanks to these two, our future Green Legacy Tree Inventory will be as diverse and technically accurate and trackable as possible. Not an easy task and we are so grateful for their keen observation of our community trees as they go to seed,” program officials state.

The Group Award of Excellence went to the Hartog Family of Guelph –  Jacob, Coulson and Brooklyn and their parents Sheri and Jason. 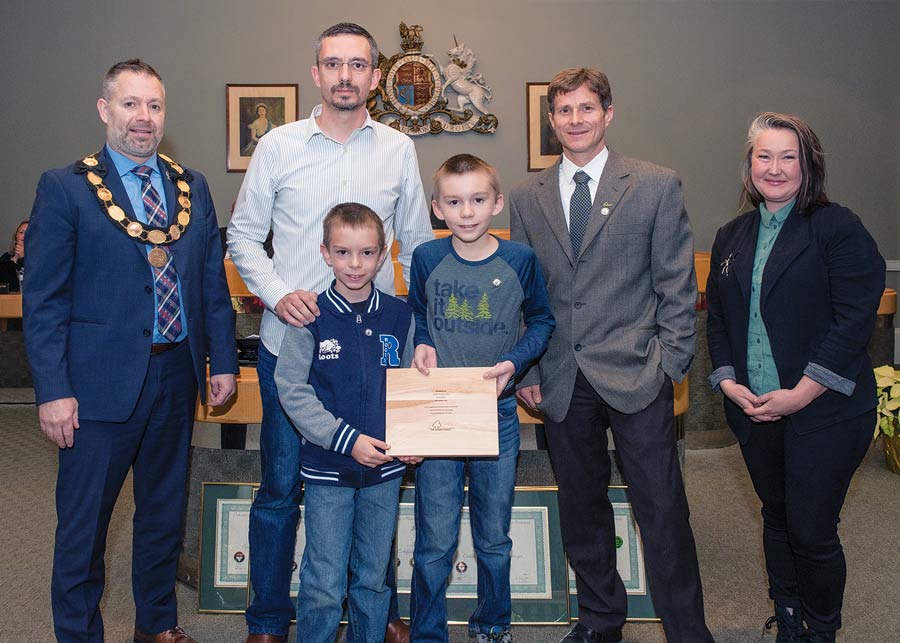 Green legacy officials state the family “are a treat to have out to the nursery.

“Recruiting their local scouts to come out, volunteering on sunny summer days and even hosting Jacob’s birthday party as a Green Legacy volunteer event.  This family jumps into any task and elevates the energy and enthusiasm for the work.”