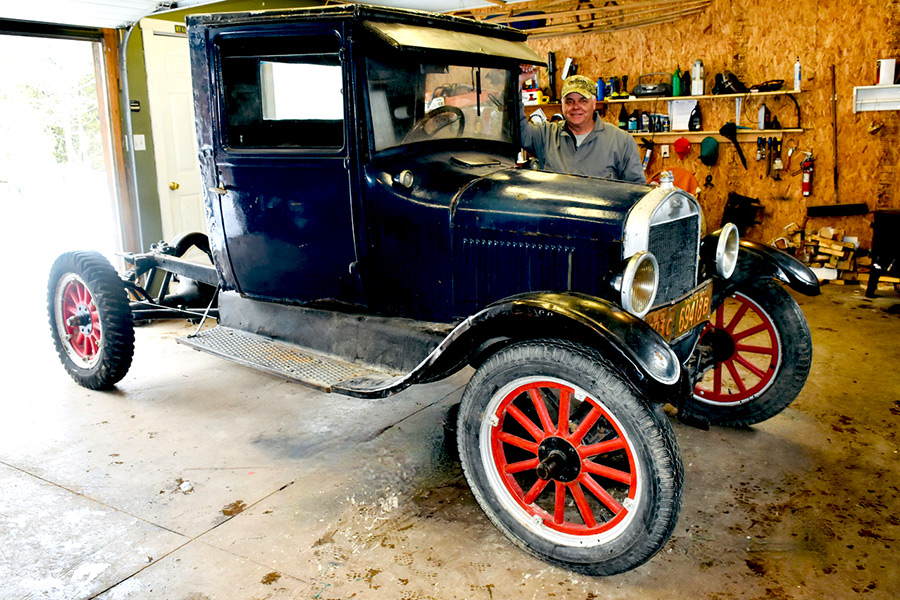 Vintage vehicles - Scott McLaren has been restoring various types of vehicles since his youth. McLaren and his Vintage Ford TT restoration project. Photos by Bridget Ryan

“One of the greatest discoveries a man makes, one of his great surprises, is to find he can do what he was afraid he couldn’t do.” – Henry Ford

Part engineer and part “MacGyver,” McLaren likes to tinker and figure out what is needed to get things working again.

The Oustic-area resident says his hobby started when he was a boy and discovered half of a canoe in a river.  He paddled downstream, found the other half, attached it back together again and had himself a free canoe.

His projects and restorations have included a 1971 Arctic Cat mini-bike, several vintage Ski-Doo snowmobiles, an 80-year-old cedar-strip canoe and a 1948 Massey Ferguson tractor. 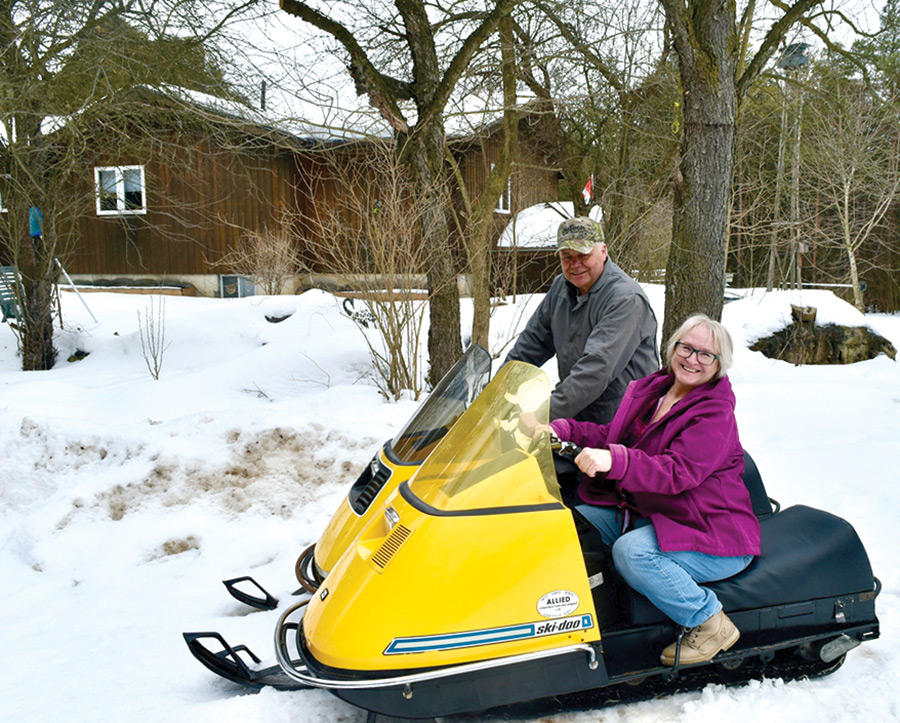 McLaren and his wife, Robin, on their restored vintage Ski-Doo snowmobiles.

“Jumping into restoration is something I’ve done all my life,” says McLaren.

One day last fall, Scott and his wife Robin were driving near Everton when they spotted a 1925 Ford Model TT for sale. Shortly after, the antique vehicle became his winter project.

The vehicle came with an ownership permit, two original owner manuals, and vintage license plates dated 1938 and 1953 attached to the front bumper.  It has a hand-operated windshield wiper, three gears – first, second and reverse – and was designed to operate at 15 to 20 mph.

The original door handles still work well, as do the hood clamps and other fittings. The wooden wheel spokes are noticeably thicker on the back than on the front wheels, designed to accommodate heavier rear loads.

“I figured that it would be exciting if I could first get it running and then the hard part would be behind me,” said McLaren.

To get his project started, he turned the hand crank on the front of the truck to see if the motor would turn over. Fortunately, it did.

Next, he rebuilt and installed a new starter motor and replaced the truck’s wooden floor and dashboard.  When he removed the seat, he discovered notes from previous owners (name, date of purchase, price paid) written on the wood panelling.  Scott and Robin have now added their own names to this historic timeline.

Henry Ford started producing Model T cars in 1908.  It was the first car to be mass produced, making it possible for many people to buy one.  Before long, owners started to cut down their Model T cars to modify them to transport goods in the back.

This prompted Ford to launch the Model TT truck in 1917. It had the same engine and transmission as the Model T car, but with a heavier frame and suspension and was built to carry almost one ton. This was Ford’s first cargo vehicle and the predecessor to today’s line of Ford pickup trucks.

So far, McLaren has been able to deal with any surprises that have come up and he’s eager to complete his restoration project.  He has met with local vintage car and truck enthusiasts and said that people have been happy to share what they have learned.

Necessary replacement parts are built by McLaren himself or have been sourced locally. Other items needed can be ordered from Snyder’s Antique Auto Parts, which offers an extensive collection of new and reconditioned parts and supplies for Ford Models T and A built between 1901 and 1931.

“This truck has been fun and has been really good project during COVID,” said McLaren.

“So far, the biggest challenge has been to get it started, but now that has happened, I hope to get it on the road by June.”

The first Ford Model TT vehicles were shipped out as a chassis only, with the body work to be completed by the owner or by a carriage builder.

The vehicles were designed so that their wooden shipping crates could be dismantled and reassembled to be used within the bodies.

Ford Motor Company announced the Model TT in 1917 and by 1918 they produced over 40,000 units. It was described as “rugged, low-cost, reliable and easy to maintain.”