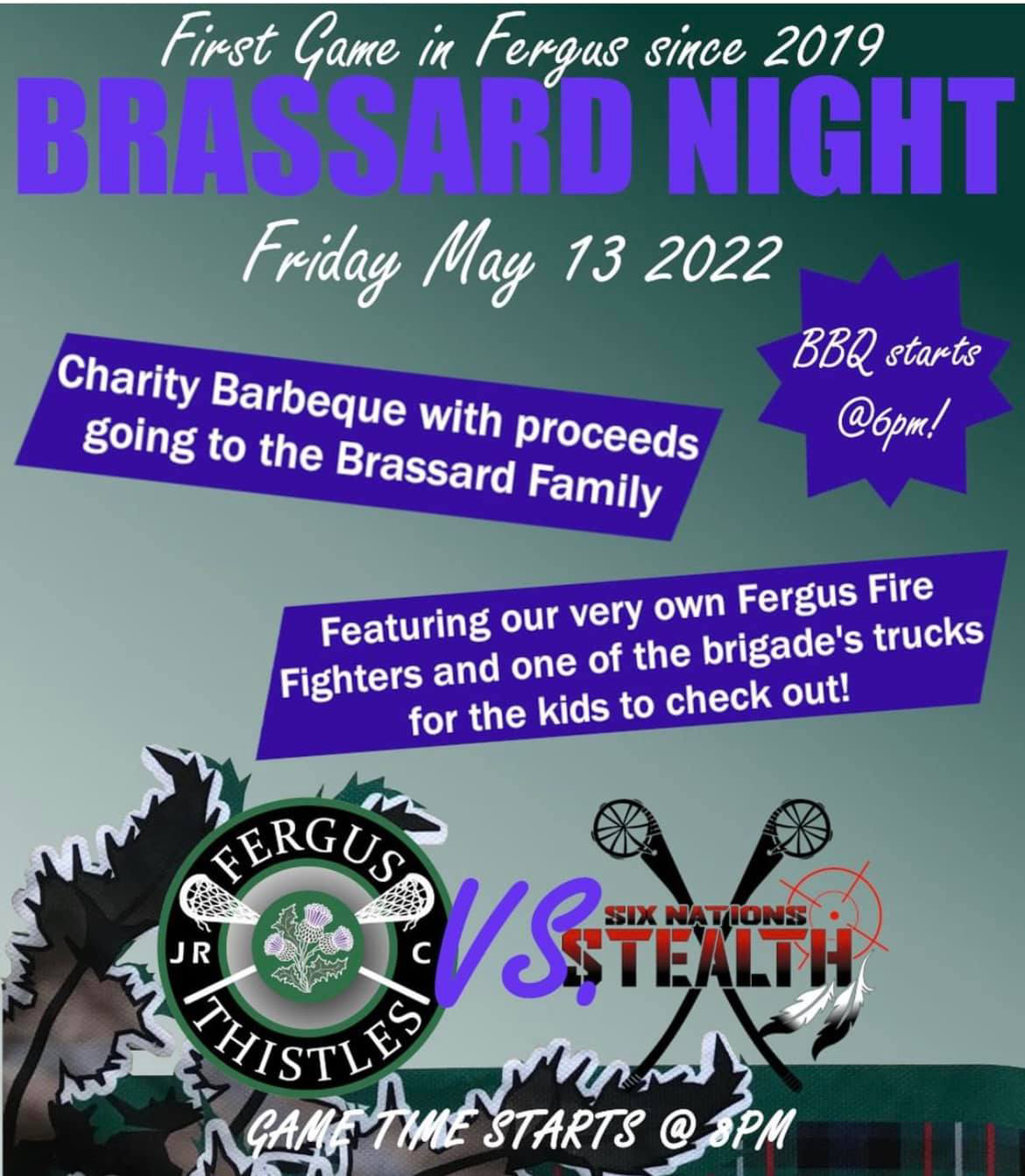 FERGUS – It’ll be the first game back since 2019 for the Fergus Thistles Jr. C Lacrosse on May 13. That may be reason enough to attend the Fergus Sportsplex event, but isn’t the only attraction.

The Thistles are collaborating with the Fergus Fire Fighters Association to hold a charity barbecue. It will raise money for a family near and dear to both groups. The event has been called Brassard Night.

The Brassard family has connections to the Thistles and fire fighters. Andrew and Paulette Brassard’s son is a long-time player for the Thistles, and Paulette has been gracious with volunteering, going “above and beyond to provide assistance,” said head coach Dean Harrison. Andrew Brassard was a member of the Fergus Fire department.

While the Brassard’s moved away from the town some time ago, they’ve stayed in touch, said Fergus Fire Fighters Association member Kyle Goss.

The Brassard’s other son, Caleb, has recently faced serious health issues, causing the family to do frequent commutes to London, Ontario for doctor visits.

The fundraiser will go towards helping cover the cost of gas, meals, and other expenses as the family makes their trips to London.

“Local lacrosse always has been and always will be driven by the community around us. The Brassards- a family near and dear to not just the Thistles but also the Fergus [Fire Department]- are the textbook example of what a community is all about. When we heard that hard times had found them, the Weeds knew exactly what had to happen,” states a post from the Fergus Thistles Instagram.

Goss added the importance of supporting community volunteers. Though the family no longer lives in the area, they are still a part of the community.

The barbecue will be running from 6 to 9pm with the game starting at 8pm.

The firefighters are planning to bring a firetruck to the barbecue to add excitement to the fundraiser, said Goss.

“The Brassards are very grateful that the community has even thought of our family especially Caleb for a fundraiser! We are quite honoured by the upcoming event and the gratitude for help received is truly humbling. Caleb is still on the road to recovery but is heading in the right direction. Thank you once again to a one of a kind community,” said a message from Paulette to the Advertiser.

The Fergus Thistle’s have been unable to play since 2019 as lacrosse seasons have been cancelled due to the pandemic. “[There’s] a full roster of young players that are very excited,” said Harrison on the May 13 game.