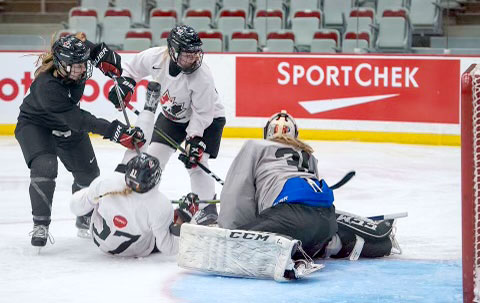 Hockey star – Sydney Healey (centre, white jersey) of Arthur was recently invited to a Team Canada U18 hockey camp in Calgary. Healey, 16, is entering her final year of high school, after which she will join Boston University’s women’s hockey team on a full scholarship. Submitted photo

ARTHUR – Local hockey star Sydney Healey has been achieving one milestone after another on the ice.

Healey, 16, recently participated in a Team Canada U18 hockey camp July 26 to Aug. 6 in Calgary, to which just 46 players from across the country received an invitation.

“It was really fun. It was super neat just to get that experience of playing at a higher level,” Healey said in an interview with the Advertiser.

“We had all of our practices and games at the Olympic arena in Calgary.”

Healey said at the camp, she was finally able to play in five-on-five games for the first time in a year and a half. Her previous season had been cancelled because of pandemic restrictions.

“It was really nice to be back out on the ice and playing good hockey. I thought I did pretty well. Everyone makes their mistakes, but other than that I think I did what I could to show my stuff off,” she said.

The camp is the first step in the process to choose a roster for the U18 World Women’s Hockey Championships, which were cancelled earlier this year due to the COVID-19 pandemic. There is currently no date set for the 2022 tournament.

Healey said she found out she had been invited to the camp while she was on a Zoom call with her coaches.

“I saw an email on my phone. I kept reading it over and I was totally thrown off. I went back and told my brother and called my dad right away,” she said.

“It was so exciting. I didn’t even know what to think!”

In the Healey household, hockey has always been a major part of everyone’s life. Healey’s older brother Tyler, 18, and younger sister Keira, 15, have had success in the sport as well. Keira and Sydney have played together on multiple teams, and Tyler will soon be playing in Maine.

Healey began playing the sport at the age of five.

“My dad played hockey when he was younger as well,” she said.

“I started with Timbits and I kind of moved my way up. I played boys AAA hockey for a couple of years, and from there I went to Cambridge and played for the AA team there for a couple years.”

The forward is now set to begin her final year of hockey in the Provincial Women’s Hockey League (PWHL) with the Burlington Barracudas. Previously, she had been a member of the Oakville Hornets, as well as the Cambridge Rivulettes of the same league.

“All of the teams I have been on have been great, all of the coaching has been awesome. The compete level is super high.”

Healey has had success closer to home as well, winning a provincial championship with the girls’ hockey team at Centre Wellington District High School (CWDHS), where she is entering her Grade 12 year.

Next year, Healey will be attending Boston University, a Division I school in the NCAA. She received a full scholarship to the school when she was in Grade 9.

A dedicated Toronto Maple Leafs fan, Healey said she looks up to players like Auston Matthews, Mitch Marner and Zach Hyman. She also mentioned Natalie Spooner from Team Canada’s women’s national team as someone she sees as a role model.

One day, she hopes to join the Canadian national team.

“That’s my goal. Just making the step up to U18 was really cool, and then just kind of building my way up from there would be really good.”

Healey said she wants to enjoy her final year playing junior hockey before she makes the transition to college hockey.

She said the main reason she joined the Burlington Barracudas was to be able to play with her sister one last time.

With a bright future in hockey ahead of her, Healey said she is excited for what’s in store.

“I’m excited to make memories with my teammates, meet new people, and hopefully win a championship,” she said.