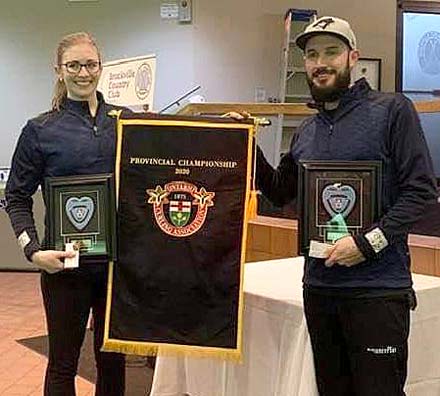 BROCKVILLE – Local curling rinks were well represented this past weekend at the Ontario Mixed Doubles Championship here, with one local curler coming home with the illustrious provincial championship banner.

Harriston’s Shane Konings, Palmerston’s Lyndsey Wilson and Mount Forest’s McKenna McGovern were among the 48 curlers in the event.

Despite a stellar performance in the round robin portion of the event, Wilson and teammate Scott Dow came up short in their bid for the championship.

Currently ranked #29 in Canada and curling out of the Palmerston Curling Club, the duo started the week strong on Feb. 28 with a 13-2 win over Thomas Taplay and Caitlyn Evely and a 7-6 win over Jessica Shipmaker and Mike Aprile.

On Feb. 29, the Palmerston rink continued its winning ways with a trio of wins – 9-5 against Melissa and Scott Foster, 9-1 against Kristina Wannan and Derek Corman, and 7-6 over Ryan Thomas and Sierra Sutherland – to finish the round robin portion of the event with a 5-0 record and the top spot in Pool C.

As a result of finishing in the top spot of the pool, Wilson and Dow gained an automatic berth into the quarter-finals, facing Ilderton’s Catherine and Chris Liscumb.

The Ilderton rink finished the round robin with a 4-1 record, good for second in Pool B.

Wilson and Dow got off to a slow start, giving up two in the first end and one in the second end, and were unable to recover. The local rink scored one in the third end before giving up one in the fourth, one in the fifth and two in the sixth. After the sixth end, the pair conceded the game, losing 7-1 and was eliminated from the event.

McGovern and teammate Sam Steep, curling out of the Forest Curling and Social Club, struggled in the round robin, going 2-3 in Pool D and didn’t not qualify for the playoff round.

The news for local curling fans wasn’t all bad.

Konings and Lauren Wasylkiw, playing out of the Unionville Curling Club, were crowned Ontario Mixed Doubles Champions after taking the long way to the title match on Sunday.

The pair, ranked #27 in Canada, started the week with a 6-4 win over Mount Forest’s McKenna McGovern and Sam Steep before losing a 7-6 decision to a Grimsby rink. Konings and Wasylkiw then won their next two games – a 10-2 decision over a Maitland Curling Club rink and a tight 7-6 win over an Ottawa rink – before dropping their final round robin game to a K-W Granite Club rink 8-4.

Konings and Wasylkiw finished the round robin with a 3-2 record, good for third place in Pool B.

On Sunday, the duo needed to win four games to win the title, and they did just that.

In the tiebreaker game, Konings and Wasylkiw defeated the same K-W Granite Club team they lost to the night before, again an 8-4 match. They went on to defeat a St. Catharines rink in the quarter-finals by a score of 6-3 and won their semi-finals match against a fellow rink from Unionville 6-1 to advance to the finals Sunday evening.

In the finals, Konings and Wasylkiw took on the Ilderton rink that eliminated Wilson and Dow in the quarter-finals.

The Liscumbs got off to a quick start, scoring a point in the first and second end before Konings and Wasylkiw scored a pair in the third and stole one in the fourth to take a 3-2 lead. The Liscumbs scored a pair in the fifth to regain the lead. In the sixth, Konings and Wasylkiw scored two, then stole one in the seventh and two in the eighth to win the game 8-4.

As Ontario champions, Konings and Wasylkiw will now compete in the 2020 Canadian Mixed Curling Championships as Team Ontario. The national event takes place March 17 to 22 in Portage La Prairie, Manitoba.