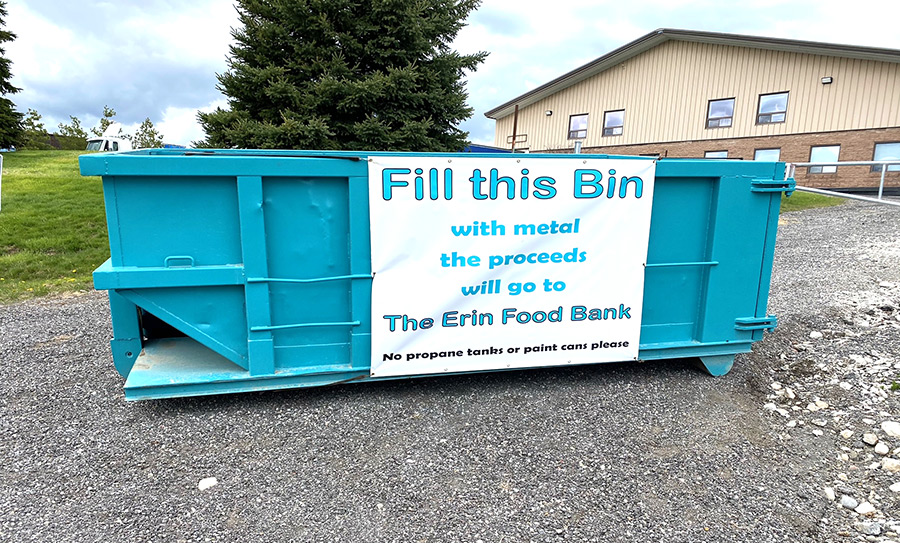 ERIN – Sanderson Disposal is taking scrap metal donated from the community and delivering the proceeds to the East Wellington Community Services (EWCS) food bank to aid in food costs.

The local business has set up a bin where residents in the community can drop off metal scrap to support the food bank.

People can come and drop off any unwanted metal they want to get rid of and Sanderson Disposal will haul it off, get the money for it and send the money to the food bank.

“We’ve done it in the past too,” owner Chad Sanderson explained. “We do it every once in a while and just throw it out there and donate the money.”

Sanderson said the initiative began a couple years ago when the EWCS food bank posted it was in desperate need of food.

Sanderson said his company already had a free drop in set up at the end of the driveway at the yard for scrap metal, so why not donate the money.

Sanderson Disposal put the bin out just over a week ago. Since then, they’ve already filled one bin.

“We were just thinking about donating some to the food bank and then we had a sign war with another company and we thought it was a good idea with all the advertising to start it then and donate some of the metal money,” he said.

“We’ve filled one bin so far, now we just put another one out there so we’ll see how fast it fills up.”

Sanderson said there’s no set timeline for when they’ll stop the initiative.

“As long as it keeps getting filled up we’ll keep using it and as long as we have a bin available to leave there,” he said.

“It’s not really a whole lot out of my pocket. All I’m really doing is trucking it, getting paid for it and transferring the money so it’s the community that’s really raising the money. I just help transport it.”

Stephanie Conway, manager of the food bank and fund development at EWCS, said the money donated goes towards food costs, allowing them the ability to purchase perishable items that they don’t normally get.

“With those extra funds we can go out on a weekly basis and purchase all of those items fresh for the clients,” she said.

“I think that’s the biggest thing with how it helps us with support is the cash donations help us buy the items that we don’t have or even items that we’re low on at the food bank.”

Conway said the team at Sanderson Disposal has been very supportive, adding it has also been a sponsor for the EWCS golf tournament.

“It helps us provide that extra support to the clients who… might’ve lost their jobs due to COVID, are unable to work due to a disability, so it certainly has helped us provide those extras that they may not even be able to get out of their home to purchase,” Conway explained.

“Our shelves may look stocked today but by the time a month goes by it depletes quite dramatically so that constant donation from the community helps ensure that these shelves are full.”