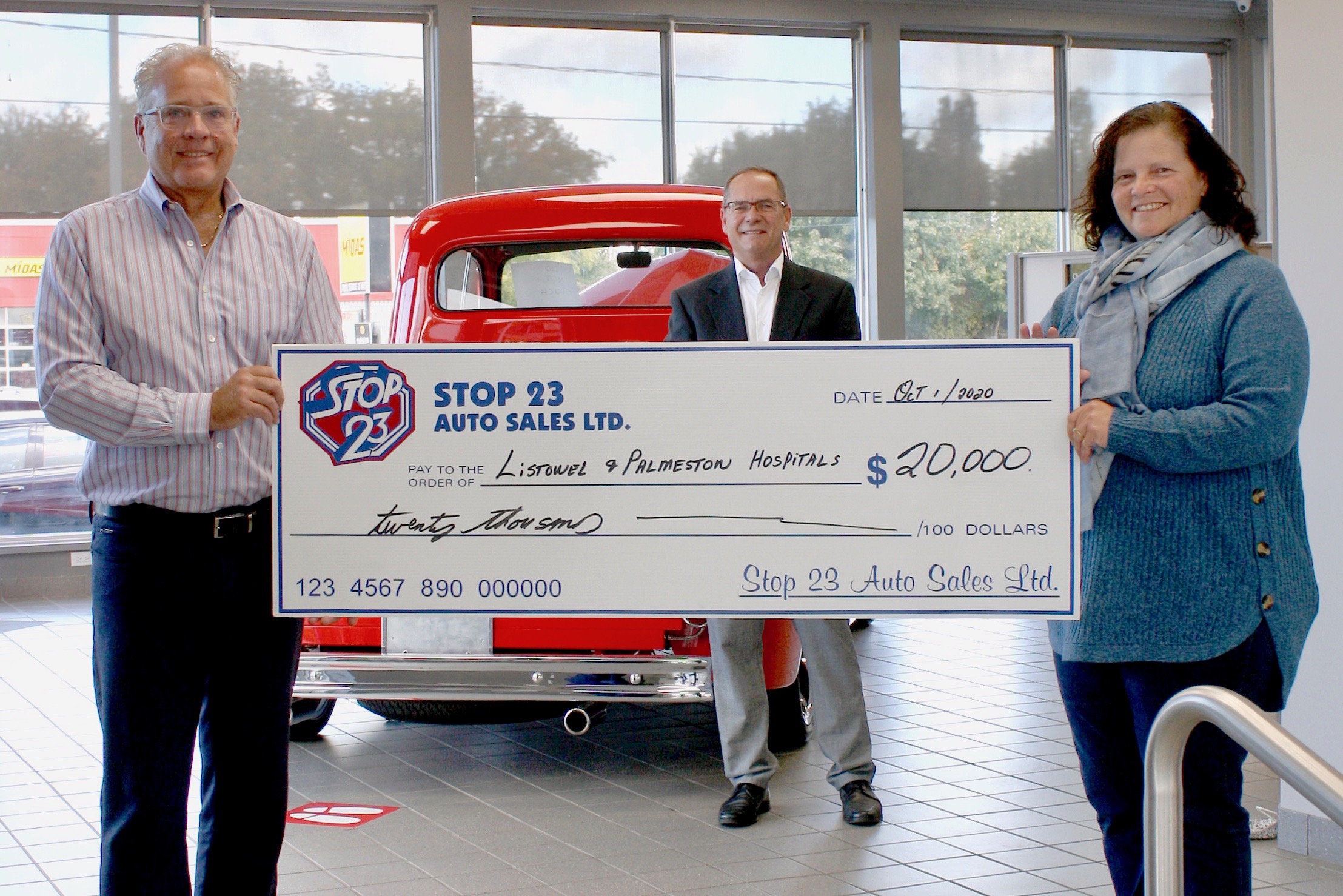 Stop 23 Auto Sales in Listowel has pledged $200,000 over five years to be split evenly between the Palmerston and District Hospital Foundation and Listowel Memorial Hospital Foundation. Owner Scott Davidson, centre, announced the pledge following a separate donation of $20,000 to be split between the two foundations on Oct. 1. Accepting the donation are John MacDonald, left, chair of LMHF and Dale Franklin, development officer of PDHF. Photo by Mike Wilson

LISTOWEL – What was expected to be a run-of-the-mill cheque presentation to two local hospitals was, in fact, something much greater.

Once the photo was taken, Stop 23 owner Scott Davidson announced the dealership is making a pledge of $200,000 over the next five years – $20,000 per year to both hospitals – in addition to the donation on Thursday.

Both MacDonald and Franklin were surprised by the announcement.

“I can’t stop smiling like a Cheshire cat,” stated Franklin.

The pledge from Stop 23, Franklin said, gives the foundation some security going forward.

“It gives us that feeling that our communities will still be behind us, whether the pandemic lasts one year, two years or more,” she said.

“We just can’t thank Scott Davidson enough for his generosity and for his team’s work in the community. We’re so excited.”

MacDonald added Stop 23’s generosity puts his foundation in a position to continue providing funds for necessary services and equipment upgrades “to be one of the best rural hospitals in Ontario.”

“Stop 23 has always been a wonderful community supporter, and this just magnifies the extent that they will go for the community, as well as the professionals in the hospitals,” he said. “We appreciate it very much.”

Both hospital foundations were forced to cancel their annual galas this year due to the COVID-19 pandemic, a huge financial hit for the foundations.

MacDonald explained that with other event cancellations, such as sales and car rallies, the potential financial impact is much greater.

And a pandemic doesn’t mean the needs of the hospitals go away.

“(Palmerston) ranges between $500,000 and $1 million a year in equipment that needs to either be upgraded or purchased new,” explained Franklin.

“We have to maintain all of our standards put forward by the province.”

Davidson explained he and his family have used both hospitals over the years and believes now, more than ever, the hospitals need the support of the community.

“Our two great local hospitals, their ability to raise money has been hampered because of the pandemic,” said Davidson.

“Now, of any time, is the time to make sure we’re being generous in our community, especially the hospitals.”

And while times may be tough, Davidson offered a positive message.

“There’s a lot more good news out there than bad,” he said.

“And people should focus on that. In the next six months, things will change.”

As for the Oct. 1 donation, both foundations have stated their intentions for those funds.

Palmerston is using its donation to assist with IT upgrades throughout the hospital, while Listowel will be using its share to renovate the first-floor nursing station and assist with the creation of a second palliative care room.