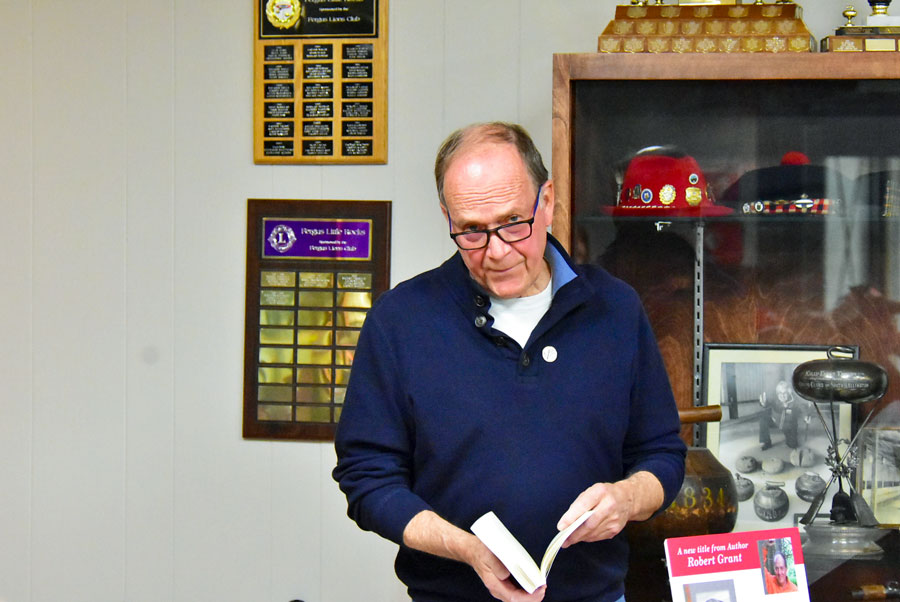 Local author Bob Grant held a book launch for The Alisa Stone at the Fergus Curling Club on Oct. 10. Grant signed 34 books and $5 from each sale went to the Little Rocks program at the curling club. Photo by Bill Longshaw

The Fergus resident wrote The Ailsa Stone, a historical fiction tale set in Scotland and Canada between 1853 and 1915 after spending a month curling in Scotland.

“I read some inspiring books, I was intrigued by the journey of a local Fergus merchant who made the trip to curl in Scotland in 1906,” Grant told the Advertiser.

“I practiced law in Fergus for almost 40 years so the legal twists in the book were second nature.

“I was born in Wellington County so many of the disguised towns are easily discernible.”

The Ailsa Stone follows the story of Stuart Fraser who leaves the mines of Ailsa Craig to make his way to the fishing area of Aberdeen.

“He has been warned of a curse that can settle on an unsuspecting member of clan Fraser but he had been given a small carved curling stone at birth which was to be a good luck charm, sufficient to deal with the potential of the curse,” Grant explained.

“His time in Aberdeen is a mix of prejudice, class distinction, a misunderstanding of epilepsy, however, this is where he meets his wife-to-be Regina.

“Things take many turns and emigration to Ontario, Canada becomes the focus for another generation.”

Curling is a common theme throughout the novel as a venue for significant turns in the story, Grant said. “The last part of the book involves a court case in Scotland and its disastrous fall-out,” he said.

On Oct. 10, Grant held a book signing at the Fergus Curling Club.

He signed 34 books, which sell for $19.95, and $5 from each book went to the Little Rocks program at the curling club.

The Ailsa Stone is available at The Bookery and One and Only shops in Fergus, The Bookshelf in Guelph, Twice Loved Books in Elora and gift shops at the Wellington County Museum and Archives and the Bruce County Museum and Cultural Centre.

It is also available from Amazon, volumesdirect.com and at Grant’s own website robertgrantwriter.com.