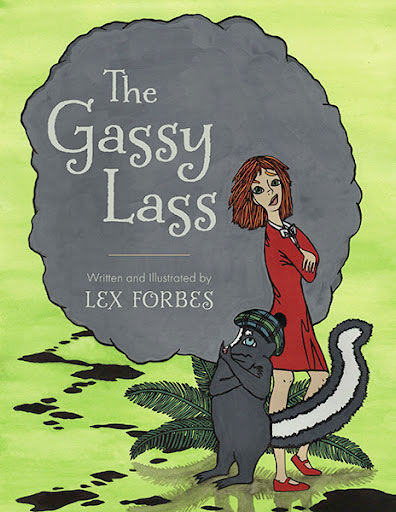 FERGUS – Author Lex Forbes of Fergus has recently released a children’s book that prompts discussions about all thing’s environment and climate change for young readers.

The Gassy Lass, released in early November, follows a lonely Scottish skunk – Snuff – living in a stump, who gets tricked by the Gassy Lass into leasing his land for oil under the false pretense of friendship.

With his home ruined, Snuff shows the Lass how to be compassionate towards the environment, and towards the creatures living within it, showing the world how to live in harmony with the natural environment.

“This journey of discovery and reconciling highlights the need for connection between people and their environment.”

Also a teacher, the local author took her three university backgrounds – visual arts, environmental management and teaching – and combined them to create this latest project, which also features her own illustrations.

“I’ve been pretty active with environmental work for over a decade now … so I was really motivated to start a dialogue, especially with younger kids,” Forbes said of the inspiration behind the book.

She noted there’s currently a strong movement with teenagers and youth fighting for the environment.

Forbes said the book inspires conversations around climate change, environmental degradation and related issues for children aged seven to 12, but can be accessible for as young as five.

“There’s not a lot of dialogue around these issues for these younger groups of youth who will be the next generation coming up and fighting these battles and facing these challenges and trying to find solutions and working together,” she explained.

She said while the book implies many environmental issues, it’s not specific to any one issue.

“It’s kind of meant to be a little open and obscure in that way so that families and teachers can use it as an ice breaking tool because there’s so many issues around climate change and environmental degradation and everything else that goes along with it.”

She added the book isn’t necessarily meant to give solutions, but to be an introduction for families and schools to start having conversations around the issues raised.

Forbes said she hopes to circulate the book  to schools and do some readings, but noted COVID-19 restrictions might pose some challenges on that front.

“I’m really heartened by all the climate change dialogue in the media lately and feel people are kind of ready to accept and face the problems,” she explained.

“So hopefully parents are ready to have that dialogue with younger children, which is kind of sometimes challenging for some families.”

One of the key takeaway messages of the book, Forbes explained, is the golden rule – treat others how you want to be treated – as well as the “not in my backyard” concept and the idea that problems are best solved with community and collaboration.

“It has many layers in the messaging department for sure, but it’s done a really playful way.”

Forbes said she already has her next books in mind, which will continue to address environmental issues. The Gassy Lass is available at Magic Pebble Book Store in Elora, the Bookery in Fergus, online at the Friesen Press bookstore and on the author’s website at www.lexiforbes.com.