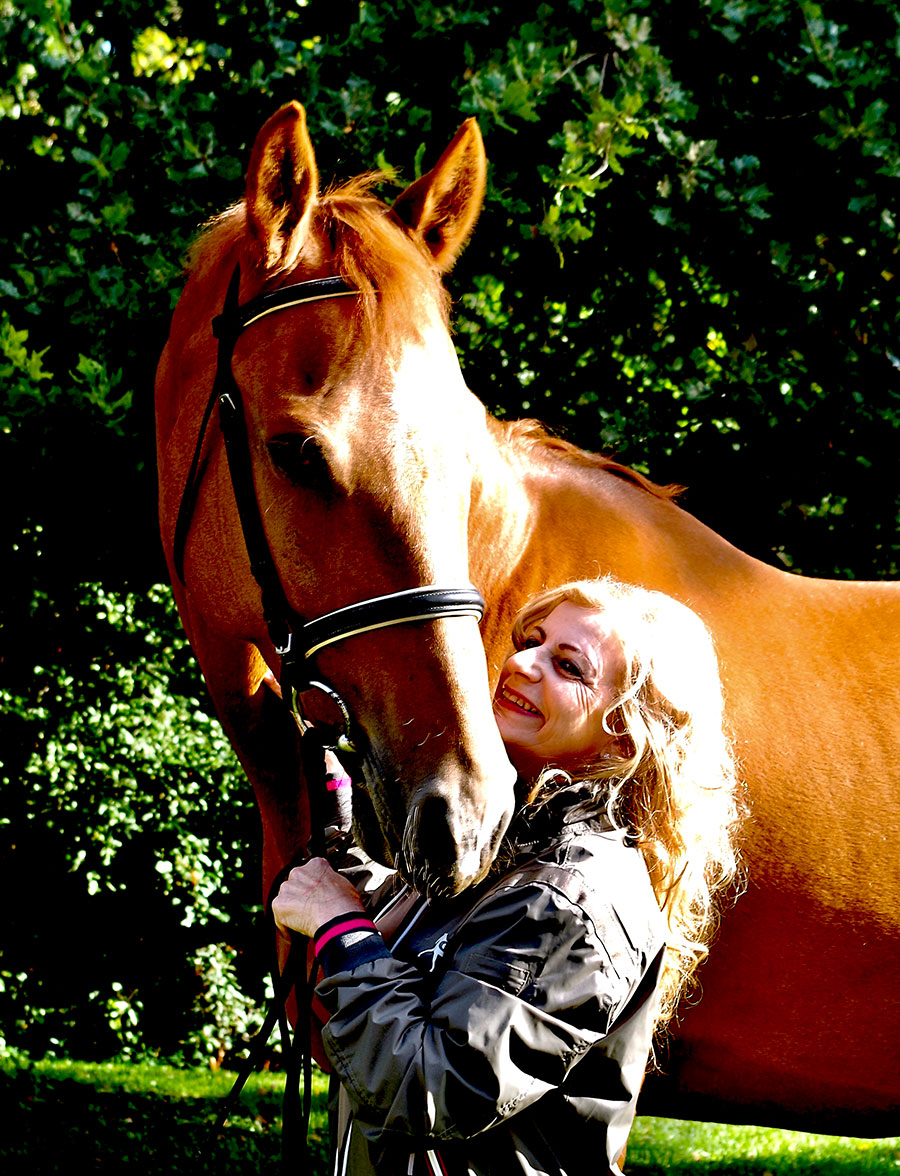 Horse advocate – Leslie Kennedy has transformed her love of horses into a new career as a certified practitioner and instructor in the Masterson Method in equine bodywork. Submitted photo

FERGUS – Leslie Kennedy has enjoyed a successful career in the equine industry, most notably in the world of dressage, with a resume that includes being a national and international Federation Equestre International (FEI) dressage official, a competition coach specialist and Grand Prix competitor.

Now she describes herself as an equine bodyworker, a practitioner of the Master Method modality, and it’s inspired her to teach others.

“I have happy horses and happy clients.”

Kennedy is one of three people trained to teach the Masterson Method in Canada, and the only one in Ontario. The practice is growing, slowly, with 405 certified practitioners globally.

“In Canada, there’s only 20 practitioners, so we’re really trying to get Canada to open up to this,” Kennedy said.

The Masterson Method was developed in 2005 by Jim Masterson to improve comfort and performance in horses.

It’s a form equine bodywork that uses the nervous system to relieve tension in the junctions of the animal’s body key to performance, using all bodywork targets: the parasympathetic nervous system, muscles, skeleton, energetic elements and fascia.

Working with the horse to gain trust, practitioners look for changes in body language that show where the horse is holding tension, such as deep core and postural muscles.

When tensions are released, muscles relax, increasing the horse’s range of motion, enhancing core abilities and reducing or eliminating physical resistance. The goal is to ensure horses can perform comfortably and willingly. 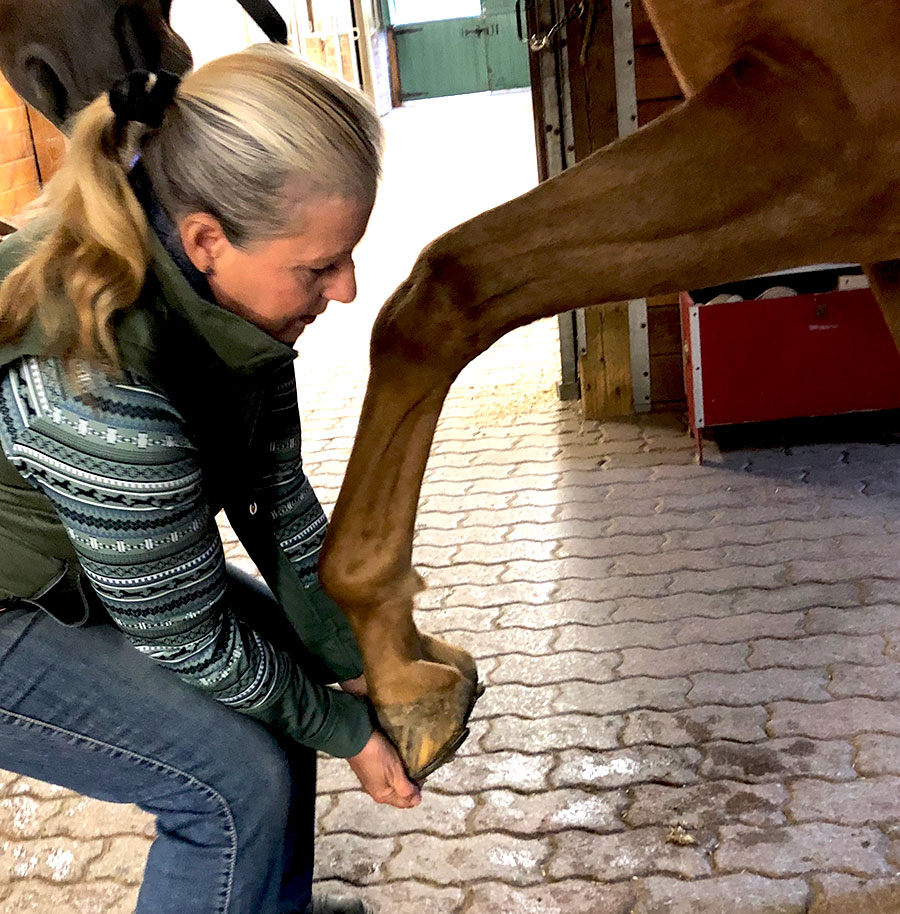 Kennedy admits the first time she witnessed the practice in action, she was skeptical.

“It kind of fell into my lap. As a rider, I have a good dressage horse and he kept getting a kind of tightness in his back,” she explained.

She told a friend about it, and the friend offered to help.

“She would go around and just lightly touch the horse. And she told me to watch the horse’s expression. The horse started to close its eyes and blink and then suddenly it would start to yawn and lick and chew, which is a big release. So, what it was actually doing was reducing tension out of that particular area.”

Kennedy saw the transformation with her own eyes and was determined to learn more. She started to research the Masterson Method and put the practices she learned into the care of her own horse and saw the positive results immediately.

But when her fellow horse trainers watched her, standing in the stall putting her fingers on pressure points on the horse, what seemed odd to them soon brought interest when they saw the results.

“People have seen what I’ve done with my own horse, who we call the ‘horse of nine lives’ because he almost died a couple of times, and if I hadn’t known this Masterson work or some of the other modalities I do, he probably wouldn’t be around,” Kennedy said.

“Then they said, ‘Would you do it on my horse?’ And I would do it and it just made such a difference in releasing restrictions in the horse and the range of motion of the horses.”

Inspired, Kennedy registered to study the Masterson Method, which she describes as a rigorous program with a significant class and practicum commitment, as well as cost.

She completed her study in a year and a half, with her final certification with Jim Masterson in Arizona, where she says she learned even more by watching him work. It was a worthwhile investment.

“I saw how much it helped the horses and I wanted to give back,” Kennedy said. “Now I’ve gotten into teaching this modality, and it’s a passion. I want to help riders to be able to help the horses.”

She said there is much to factor into the horse’s physical and emotional behaviours, including how the tack is fitting, how the rider is riding the horse, if there are any injuries known or unknown.

“That starts to add up to behaviour problems and horses not wanting to go forward, but it’s quite often physical,” Kennedy said.

Her experience and reputation in the equine industry has helped her build a trust in her equine bodywork skills.

“With my background, I can talk to people about their riding,” she said.

“I can look at the musculature of the horse and I can … tell you how it’s been ridden,” she explains. “I can watch them go, and watch them in hand and say, ‘I think we’ve got issues here, here and there.’ And then you put the hands on do the body work.”

For the horse owners, the proof in Kennedy’s equine bodywork is in the outcome.

“I go and work on their horse and when you’re working on it, they can actually see the changes in the response and releases of the horses. So then, when they go to ride them again, they feel such a difference,” she said.

“If we don’t deal with that primary source, the issue will keep coming back. And depending on how long those issues have been there, it’ll take time to get out because it’s like layers and layers,” Kennedy explains.

“You keep peeling it away until you get right down to that primary source and get that addressed.”

Jane Hyndman of Limehouse heard about Kennedy from fellow riders who had success with their horse. She contacted Kennedy to help with her horse Tina, a 10-year-old Hanoverian eventing horse that was experiencing tightness in her back muscles.

“This all started to come about because Tina’s a very willing horse and always wanting to do what I ask her to do, but all of a sudden, she started saying no to things and just being grumpy. And then I discovered that her back was so tight. I don’t know why that happened,” Hyndman said, adding she followed Kennedy’s work and advice with success.

“Leslie Kennedy herself is extremely knowledgeable horsewoman. And on top of that has depth of knowledge about horse anatomy,” Hyndman said.

“You have to go through a bunch of things like getting your saddle checked and just making sure there’s nothing physical that was happening to make my horse sore, and when that was all checked out okay, then I have to look for a way to set her back right and get it soft again. And so that’s what Leslie has been able to do.”

Hyndman admits she doesn’t fully understand how it works, but it does to the effect that she now has three horses who are regularly in Kennedy’s care.

“Kennedy does things that cause the horses to relax,” she said, noting her horses often sleep when she’s done the bodywork.

Word of mouth spread, and now Kennedy has over 100 clients across Wellington County, Dufferin County and Wellesley. She is logging 12-hour days and enjoying the work.

“These alternative methods, people are looking for that more now. It’s in no way a substitute for veterinary care. We always stress that,” Kennedy said.

“But people are looking for alternatives and something they can do to interact with their horses too.

“So when we teach some of these courses, like the weekend courses I’m going to be teaching, it can help them do those things on their own and people like that they connect with a horse in a way that helps the horse.”

Teaching equine bodywork is as important to Kennedy as the practice itself, because it fits her ultimate  goal to be a horse advocate.

“It’s about giving back now at this stage of my career. I’ve done this my whole life. I was in the show ring for over 50 years and so now I can step back,” she said.

“And I’ve got all this background behind me to go into this.”

The Masterson Method Beyond Horse Massage Hands-on Seminar/Workshop is set for Aug. 27 to 29, at Silver Fox Equine, 873096 5th Line EHS, Mono. The cost is $410 USD. For more information and to register contact seminars@mastersonmethod.com, or visit mastersonmenthod.com. Another series is set for Oct. 22 to 23.