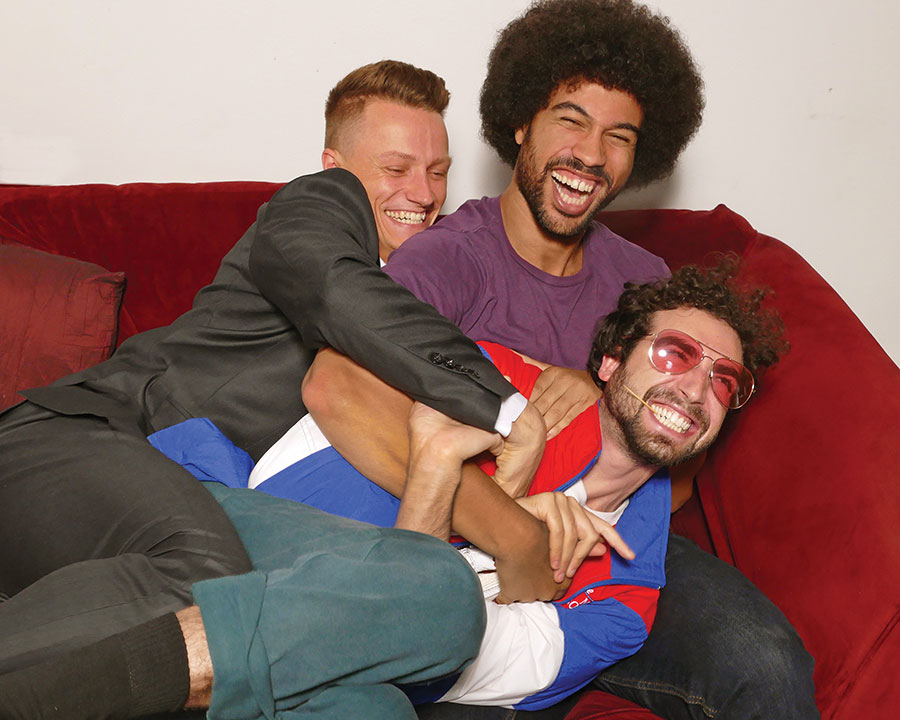 Having a gas - Stand-up comedians Andrew Packer, Che Durena and Jacob Balshin are bringing their routines to the Mount Forest Tavern on Dec. 4 during their martime-Ontario comedy tour. Photo by Adrian Fiebig

MOUNT FOREST – The JNT comedy tour is laughing its way from the maritimes, back to Ontario for the tour’s seven remaining nights, with a local stop in the county.

Consisting of comedians Andrew Packer, Che Durena, and Jacob Balshin, the troupe hopes to bring the laughs to northern Wellington on Dec. 4 when it kicks off the Ontario leg of its tour at the Mount Forest Tavern.

The east coast reception has been “really great,” Durena said, speaking to the Advertiser as the crew made their way to a seaside stop in Musgrave Harbour.

“People are just so grateful to have a show,” he said, feeling good about getting back in front of audiences again following humourless lockdowns.

Featured on Just For Laughs, Sirius XM, CBC, JFL42 and Herb, Durena has moved around from British Columbia to Mexico before settling on Toronto and is used to the stark contrast between shows in secluded areas and the big city, having performed at over 1,000 shows in Ontario.

“You definitely play it by ear,” Durena said of his material. “I like an absurdist look on anything, like if I can find something that I think is bizarre or something that people take for granted, I like to kind of poke fun at that.”

The first 10 minutes are spent getting a feel for the audience before progressively pushing the boundaries to gauge reactions and where the line gets drawn.

While the comedians all get along well together and are around the same age, each pulls from different perspectives and experiences for material and comedic approach.

“Andrew is engaged, and has a long-term girlfriend; I’m like the complete opposite of that,” Durena said, adding, “I’m probably the dirtiest of the three of us; Andrew’s probably the cleanest.”

Balshin is something different altogether, moving between standup and musical comedy.

The trio will have made 11 stops before beginning the Ontario leg and Durena said the show is constantly getting tighter as they perform.

The show starts at 8:30pm on Saturday and tickets are available for $20 through Eventbrite by visiting: linktr.ee/jntcomedy.

Tables for dinner need to be booked separately by calling the Mount Forest Tavern at 519-323-1461.