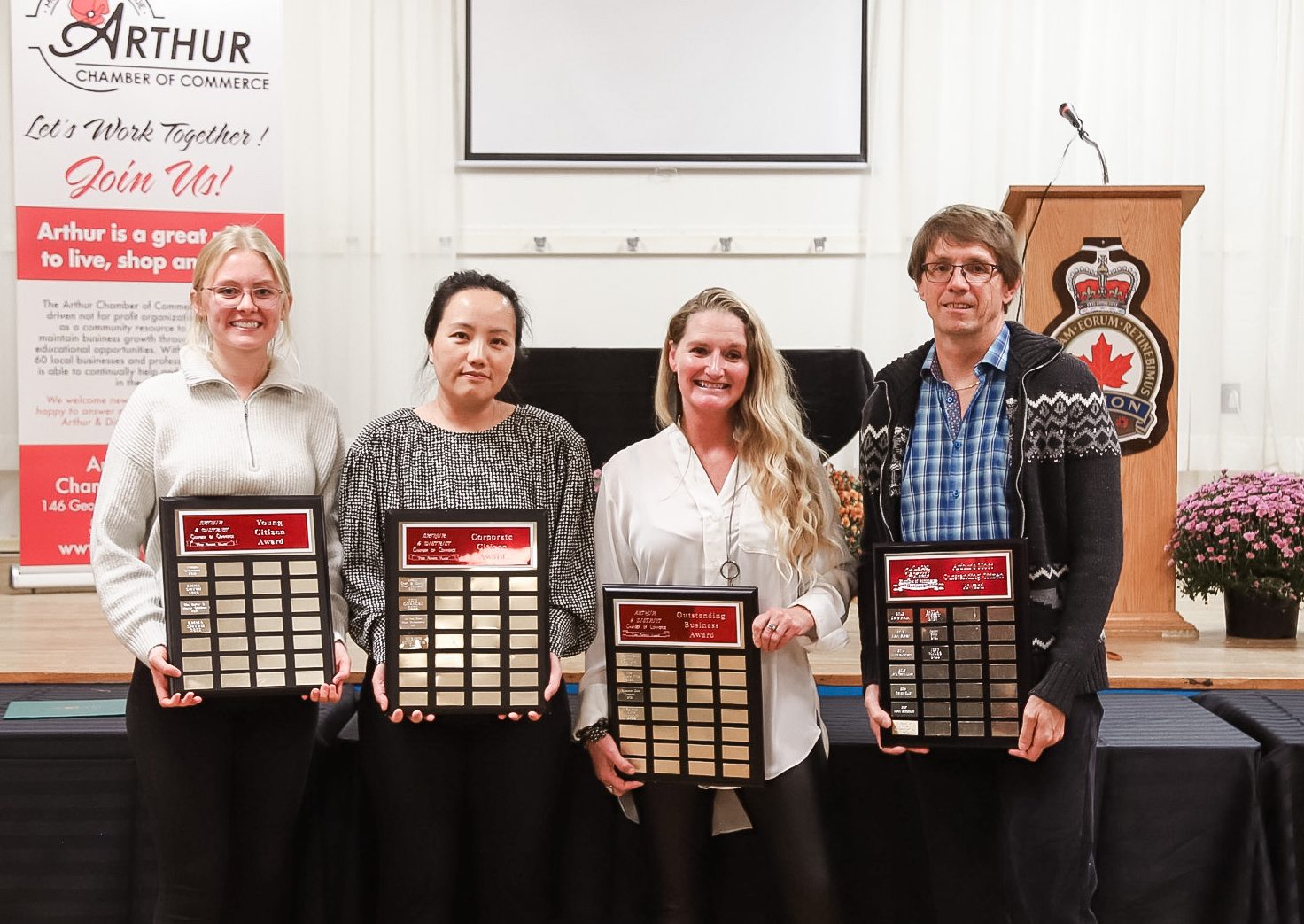 ARTHUR – The Arthur Chamber of Commerce presented its 2022 community awards to recipients at the Arthur Legion on Oct. 19.

Citizen of the year

Jeff McKee was presented with this year’s Citizen of the Year award.

It’s the second time the local resident has taken home the award, after sharing it with his wife in 2015.

McKee had a busy year and was instrumental in this year’s Arthur 150 celebrations, responsible for the displaying of veterans’ crosses, a meet-and-greet, and historical walking tours.

He also produced a history booklet for the occasion with photos and articles and managed a dedicated Arthur 150 Facebook page.

Three historical displays—at the Arthur 150 event, Fall Fair, and a Tigers and Eagles Reunion — featured items from McKee’s personal collection and the Arthur and Area Historical Society, for which he also manages a Facebook page, posting around five stories per day.

McKee continues to coach softball and sit on a minor ball executive team.

“Grant Rundle and I organized the Arthur Tigers/Eagles Reunion. We had a 150 float, new jerseys, 10 new banners went up at the arena celebrating hockey championships from 1929 to 1991, and a dozen people were honoured for past outstanding contributions to the teams,” McKee stated in an email.

“That’s the biggest part of the fun.”

This year’s youth citizen of the year award went to Emma Smyth, who also won the award for a second time, having received it previously in 2020.

“I am incredibly honoured,” Smyth stated in an email.

Smyth is a recognizable face around the Arthur community, having long been a part of it.

“It’s where I went to school and where I played sports,” Smyth said.

She became a member of the Arthur Agricultural Society in 2019 and recently completed a term as Arthur Fall Fair ambassador.

“Throughout my year holding this title, I was a part of every Arthur event that I could be and I even put on my own fundraiser for the agricultural society,” Smyth said.

She finished her reign at the Canadian National Exhibition as a first runner-up in the exhibition’s Ambassador of the Fair competition.

“It was an amazing experience getting to represent Arthur and bring some recognition to our community,” she said of the experience.

“I am honoured to be recognized for my dedication to this community and I look forward for the years ahead.”

Arthur Chamber administrator Brea Smith said there were 93 people who attended the event, making for great company and food in a great atmosphere.

“It went really well. We were happy to see so many people come out and join us,” she said.

In a social media post, Smith said, “We are proud of each and every one of you that were nominated by members of our community.

“You all continue to amaze us with your hard work and dedication to our small town.”