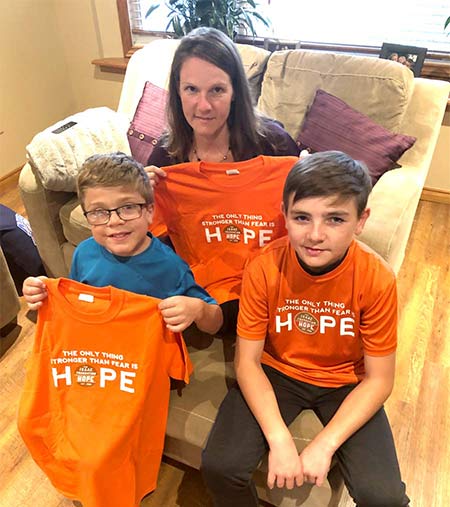 Hope for a cure - Jasper More will travel with his family to Italy next month to undergo a newly-developed treatment for MPS. The family hosts Journey for Jasper, an annual fundraiser to support research into the condition, each fall. This year’s event is slated for Sept. 28 at the Palmerston Lions Heritage Park. From left: Jasper More with his mother Pam and brother Clayton.
Photo by Patrick Raftis

PALMERSTON – “The only thing stronger than fear is Hope.”

That’s the motto of the Isaac Foundation writ large across the front of T-shirts worn by participants at the Journey for Jasper community run held here annually since 2016.

It’s hope for a cure to MPS that inspires both the foundation, and the family of 10-year-old Jasper More.

Jasper’s parents Pam and Darren More founded the local run in an effort to help fund research into the rare syndrome their son was diagnosed with in 2011.

Darren passed away in a tragic 2018 automobile accident, but the hope that has sustained the family in the years since Jasper’s diagnosis is becoming a reality. Jasper is headed to Italy next month to take part in a clinical trial for a promising new treatment.

“I have enrolled Jasper in a clinical trial for gene therapy,” Pam told the Advertiser in a recent interview. “Basically we’ve been funding this research though fundraising events for years and it has advanced so far that I believe it is the cure that we’ve been looking for.”

Jasper will be the seventh person to undergo the new regimen, which involves a one-time cell infusion followed by weeks of monitoring and tests.

“So the results at this point aren’t conclusive obviously, but they are showing promising results,” Pam explained.

When they head to Naples for the 15-week treatment program in mid-October – Pam, Jasper and siblings Daphnie and Clayton are all going for the duration – the family will be embarking on a stage of their journey doctors warned might never come.

“When Jasper was diagnosed in 2011 we sat down with doctors and we were getting, you know, the bad news … the one doctor kind of looked Darren and myself in the eye and said ‘Gene therapy is the cure. It’s what you need. But you’re not going to see it in your lifetime … it’s not going to come that fast.’ So to think that we’re actually there is crazy,” said Pam.

MPS is a progressive condition that causes many tissues and organs to enlarge and become inflamed or scarred. Affecting about 1,000 people in the world and about 15 in Canada, MSP can also cause skeletal abnormalities. Pam said Jasper is doing well compared to many with the condition.

“When I compare him to kids the same age with the same disease, he really is doing well. It can be a very nasty disease with symptoms and what it causes and he’s really doing pretty good,” she said.

“Pretty much any sport out there he will try,” said Pam.“He’s pretty active and I actually attribute that to why he’s doing so well. A lot of the ramifications of the disease build up in the muscles and the bones and the joints and I think every time he’s up running around it’s the best thing for him.”

A Grade 5 student in the French immersion program at Palmerston Public School, Jasper hopes one day to be an author and is “a good student,” his mother notes.

“He really likes school, likes hanging out with his friends … he’s a social kid.”

This year’s Journey for Jasper will be held on Sept. 28. Participants can walk, stroll or run through the 5km course. The event will be done, appropriately, Italian style, meaning the theme will be reflected on T-shirts and at pits stops along the route. Lunch will also include pizza.

The 2018 run raised more than $50,000. Journey for Jasper has brought in about $100,000 since it began and the Mores are proud of the role those funds have played in the search for a cure.

“The thing that is unique, and it truly is unique, about the Isaac Foundation, is that 100 per cent of donations go to research. We have no admin fees whatsoever … it actually is every penny,” Pam points out.

While the Isaac Foundation doesn’t directly fund the family’s travel to Italy, an organization called the Foundation for Equal Access for Rare Disease works in collaboration “and they will provide some assistance,” Pam noted.

“We really want them to sign up in advance so we can get them a T-shirt,” Pam said.

Pam said it’s difficult to predict how many will turn up this year, as last year’s numbers swelled following the accident that claimed the life of her husband, a longtime champion of the event.

“The thing just kind of exploded and I know that was based on circumstances …  I don’t know what to expect,” she said.

“So my deep down hope would be a couple of hundred, but I’d love to see tons.”