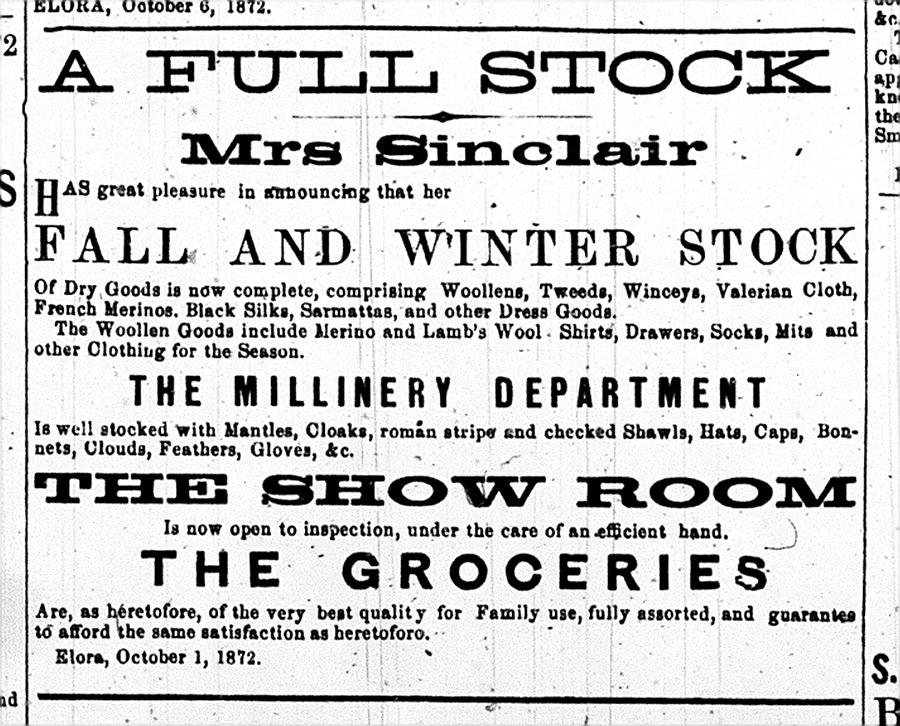 It pays to advertise – Isabella Sinclair made extensive use of handbills and newspaper advertising to attract customers. She held frequent sales and pioneered in offering monthly and weekly specials, which she used to encourage cash sales rather than credit. She was among the first Elora merchants to regularly publish prices. This advertisement is from the Elora Observer in 1874. Wellington County Museum & Archives image

Over the past decade or so, women’s history has become an important field within the historical discipline.

As with all intellectual fads, the quality of the work has been uneven. Some of this writing has already expanded the perspectives of historians working in other fields, some of it is interesting, but not very important, and some of it is merely silly.

The field of women’s history emerged largely because women are absent in the sources used by most historians for work on the 19th century and before, and, therefore, women are largely absent in history books.

No women were involved in active politics, and few had any kind of public profile. Only the temperance movement and groups involved with the churches and charities had active participation by women.

Few 19th-century women were active as owners or managers of businesses. Those who were most often inherited the business from their husbands. Nevertheless, the support of wives was essential to many retailers and small manufacturers.

In many cases, 19th-century women received more education than men. They tended to stay in school longer, and girls attended more days in the year than boys.

Males usually joined the work force for at least part of the year at 13 or 14. There were fewer employment opportunities for females; they stayed in school.

As a consequence, wives frequently looked after the books of small businesses, and dealt with both customers and salesmen, allowing their husbands to continue with work in the shop or with other duties.

As in other towns, we know little about the lives of Elora’s women of a century and more ago. Only a few have left their mark on the historical record, and we can count these on our fingers.

For example, Margaret Bain ran the Elora Hotel after her husband started his woolen mill in 1863. Grace Allan managed the business interests of her husband, Charles, after his death in 1859. Betsy Potter participated actively, but informally, in the management of the Potter foundry. Maurice Halley could not have run his bakery and catering operation without the help of his wife, Elizabeth.

At the head of the list of conspicuous Elora women stands the name of Isabella Sinclair.

She was the first woman in Elora to run a store, and her career as a merchant and business leader spanned almost a half-century.

George and Isabella Sinclair came to Elora in 1853 from Aberdeen, Scotland. George was a mason by trade, and spent the active part of his life as a contractor. Isabella set up shop in their Princess-Street house as a dressmaker.

For about a decade, Isabella was also engaged in a common occupation at the time:  running a boarding house. In 1861, there were nine boarders in the Sinclair house, including a couple with four small children. In 1863, she began to concentrate on the dressmaking business exclusively.

Two years later, George and Isabella Sinclair took over a small store on Mill street that had been formerly run by Arthur Farrow.

Following a fire, Elora banker Walter Newman constructed a new stone building at the northwest corner of the Victoria Street bridge in 1866. He located his bank in the space closer to the river, and rented the other half of the building to the Sinclairs, who opened in January of 1867 with a stock of groceries and dry goods.

(Today it is Steve’s Sheepskin and Leather Shop at 50 Mill Street.)

The store was nominally under the management of George Sinclair, but Isabella called the shots. Four months after opening, her name began to appear on many of the advertisements. Within three years, she had taken over complete control of the store, which from then on was known as Mrs. Sinclair’s. George was relegated to driving the wagon to pick up stock.

Isabella Sinclair quickly impressed the community with her business ability. John Smith, of the Elora Observer, noted in 1873 that she competed successfully with her male neighbours and that, of Elora’s merchants, she was “boldest in advertising her wares, and clever in selling.”

In 1871, she brought her sister, Eliza, into the business as a clerk and manager of the millinery department. Three years later, her younger brother, William Massie, arrived. He was soon plying his trade as a tailor in Mrs. Sinclair’s store.

During the 1870s and 1880s, Isabella Sinclair spearheaded efforts to improve Mill Street by making the stores more attractive and the street cleaner. New stores on Geddes Street were hurting the trade on Mill Street at this time, and Elora’s entire commercial sector was in a period of decline.

When the new Victoria Street bridge was built in 1871, Mrs. Sinclair joined with Walter Newman and Thomas Biggar in legal action opposing the increased height of the new bridge. They argued that the bridge would overpower their places of business and make access more difficult. The north end of the bridge was lowered somewhat in response, but it was raised ever higher during later reconstruction. (The sidewalk in front of the building still marks the original height of the Victoria Street bridge.)

Unlike many other Elora stores, Mrs. Sinclair escaped bankruptcy and failure in the 1870s. She bought carefully, tailoring her stock closely to the demands of customers. She held frequent sales to dispose of stock that was not selling.

Though she outlasted most of her competitors, Isabella Sinclair eventually failed. The village was stunned by the announcement in January of 1897 that Mrs. Sinclair was bankrupt. At the time, it was the second-oldest retail business in the history of the village. Ironically, failure came just when the local economy was starting to pick up.

Mrs. Sinclair was the victim of uncollectable accounts. It appears that she was too generous in granting credit during the hard years of the early 1890s, and found herself unable to pay her own bills. In many cases, the debtors had moved away and could not be found.

Isabella Sinclair died seven years later, on Jan. 8, 1904, at the age of 74. A week later, George Sinclair collapsed on the main street and died. The couple had no children.

Neither Eliza nor William Massie married; both worked for and lived with their sister all their working lives. Isabella had another two brothers. David Massie opened a bakery on Mill street in 1870. He left town in 1876, but later returned to the business, retiring from it in 1914.

James Massie was a retailer in Guelph. He served as mayor and, in 1876, he was elected as member of the legislative assembly of Ontario for South Wellington. Later, he was the registrar for Wellington County, and then the warden of the Don Jail. He died in Toronto in 1904.

Isabella Sinclair stands out in history as a woman because she operated a business under her own name for three decades. Her business ability was better than that of most of the male retailers of the time. She maintained a fairly high profile in the town; consequently, we are able to follow her life and activities in some detail.

With her dominant personality, she completely overshadows her husband, who seems to have been retiring and less successful. We know far more about Isabella Sinclair than we do about George Sinclair.

Mrs. Sinclair, as a woman who built a career in her own right, is very much an exception in the history of 19th century Elora. No records of the daily activities of most women have survived, and we are forced to read between the lines to get a picture of the way women participated informally in the economic, political and social life of the community.

It is a picture that will always be fragmentary. This is one of the great frustrations of historians.

*This column was originally published in the Elora Sentinel on Aug. 27, 1991.