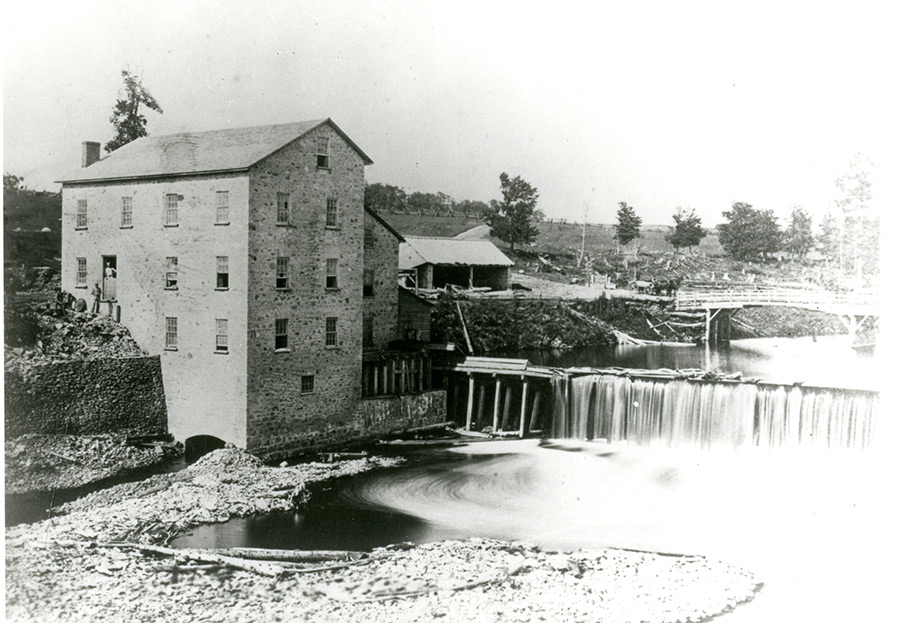 The Aboyne Flour and Oatmeal Mill – This photo of the mill was probably taken in the 1870s. The bridge is visible at the right, and between the mill and the bridge a shelter for wagons and horses can be seen. The mill employed two teamsters. When “Honest John” McGowan reconstructed the mill at the turn of the century, he added a substantial wing at the left side and rear of the mill. Wellington County Museum & Archives, ph9911

In 1990, the County of Wellington put up signs to mark the hamlet of Aboyne, between Fergus and Elora.

The signs may have been new, but the hamlet is not. Aboyne was surveyed as a village with a couple of hundred lots in 1855. The developers were Charles Allan, the most important Elora businessman of the 1850s, and James Geddes, an over-sharp lawyer and son of Andrew Geddes, the Elora Crown Lands agent.

Allan and Geddes located their new village at Aboyne to exploit the power potential of the Grand River. However, Aboyne was not one of their successful business ventures. Few building lots were sold, and no purchaser for the mill site was found until 1860.

The new owner of the Aboyne mill site was David Foote, a farmer who was actively involved in politics and local business ventures. (Elora’s Keating subdivision is on his farm.) Foote constructed a dam and an oatmeal mill, which went into production early in 1861. His oatmeal, which he sold in 100-pound bags, became an immediate local favourite.

Foote was described in the Elora Observer as “that wonder of wonders, an honest miller.” Honesty by itself did not guarantee success, and Foote soon exited the milling business. He leased the mill to William Turner in 1862, and sold it in 1863 to George Stewart and Dr. William Clarke of Guelph, who in turn leased it to Robert Austin.

The mill changed hands again in 1867. The new operator was James Henneberry, who had operated a small but successful flax business across the river from the mill for the previous five years. Henneberry’s partner, who provided most of the financing, was William Gibbon Jr., of the Bon Accord settlement. In 1868, Henneberry and Gibbon began construction of a large addition to the facility to house flouring equipment. The new wing was 28-by-50 feet, four storeys high.

The late 1860s were good years for the milling business, and the mill prospered until it was destroyed by fire in 1870. Henneberry and Gibbon rebuilt immediately, financed by a $10,000 mortgage from the Merchant’s Bank.

The new mill was much larger than the old one. The main building was 50-by-50 feet, and five storeys high. The equipment was state-of-the-art for the time, manufactured by Goldie and McCullough, of Galt. Two water turbines propelled four sets of flouring stones, and a third wheel powered the auxiliary machinery. A bridge connected the mill, on the north side of the river, to Henneberry’s flax operation on the south side. Twelve men were employed at the combined operation, but this rose to 25 in the late fall when flax seed was being prepared for shipment.

Henneberry and Gibbon expanded the scope of the business when they opened a grocery store in Elora, in property owned by Gibbon on the south side of Mill Street near the Elora Mill. The store served as the business office and a retail outlet for Aboyne Brand flour and other products of the mill.

Business seemed to be going well for the first 18 months, but unpaid bills kept piling up, despite an additional $5,000 of working capital provided by Gibbon’s father. At a meeting of creditors at the end of 1872, it was revealed that no payment had been made to the bank, over $3,000 was still owing on the milling equipment, and a further $3,000 was owed to Duncan McGowan, an Alma-area farmer.

Henneberry and Gibbon were unable to reach an agreement with the creditors, and the mill was sold at auction a week before Christmas in 1872 for $12,000 ($1,000 less than the mortgages on the property). The purchaser was John Barrett, who came from Peel township.

The flax mill on the south side of the river wound up in the hands of Duncan McGowan. The rest of the creditors, including farmers who had sold grain and flax to Henneberry, settled for 25 cents on the dollar. Although this was one of the more spectacular business failures in local history, the flour mill never stopped operating. The bankruptcy had wiped out most of the debt, resulting in lower fixed costs than at other Elora-area flour mills, which struggled through the 1870s. John Barrett proved to be an able manager, and the head miller, Martin Fahey, kept the mill running efficiently, turning out flour, oatmeal and chop.

Across the river at the flax mill, matters were not running so smoothly. After taking over the property, Duncan McGowan hired Henneberry to run the flax operation. The spring floods of 1873 severely damaged the mill. Twelve men were out of work, and James Henneberry soon departed from the Elora area. Repairs were soon made, and the business was back in operation under the management of Croyden and Kennedy. The flax was brought in by farmers from as far as Garafraxa and Peel townships.

In the late 1870s, the mill was producing 500 tons of flax seed a year, all of it shipped to England. It was dull, labour-intensive work. The mill had seven scutching machines to separate the seed, but everything else was done by hand. Forty people were employed at the peak of the season – men, women and children. Pay rates averaged about 60 cents per day, half what was earned by a common labourer at the time, and few of the workers could count on more than six months of employment per year. The workers were all impoverished immigrants, many of them Irish, who lived in shanties and shacks near the mill. No trace of these dwellings remains.

The peak years for the flax operation were from 1876 to 1883. M.B. Perrine and Co. succeeded Croyden and Kennedy as operators in about 1880, but abandoned it after three years. Even with starvation wages, the business was becoming unprofitable.

With the flax mill closed, the population of Aboyne dropped to about 50. It recovered somewhat in 1886 when S.J. Taylor revived the flax business, which he continued to operate on a small scale until about 1892.

Meanwhile, the flour mill had changed hands. The new owner was Bernard McMahon, an associate of John Barrett. To keep up with the times, McMahon replaced the stone grinding wheels with steel rollers. The new equipment was in service for only a year. In 1884 it was seized under a mechanic’s lien. It was the end of the road for Aboyne Brand flour, and almost the end of the road for Aboyne.

(Next week: The rebirth of the Aboyne mills under the management of John McGowan.)

*This column was originally published in the Elora Sentinel on July 2, 1991.