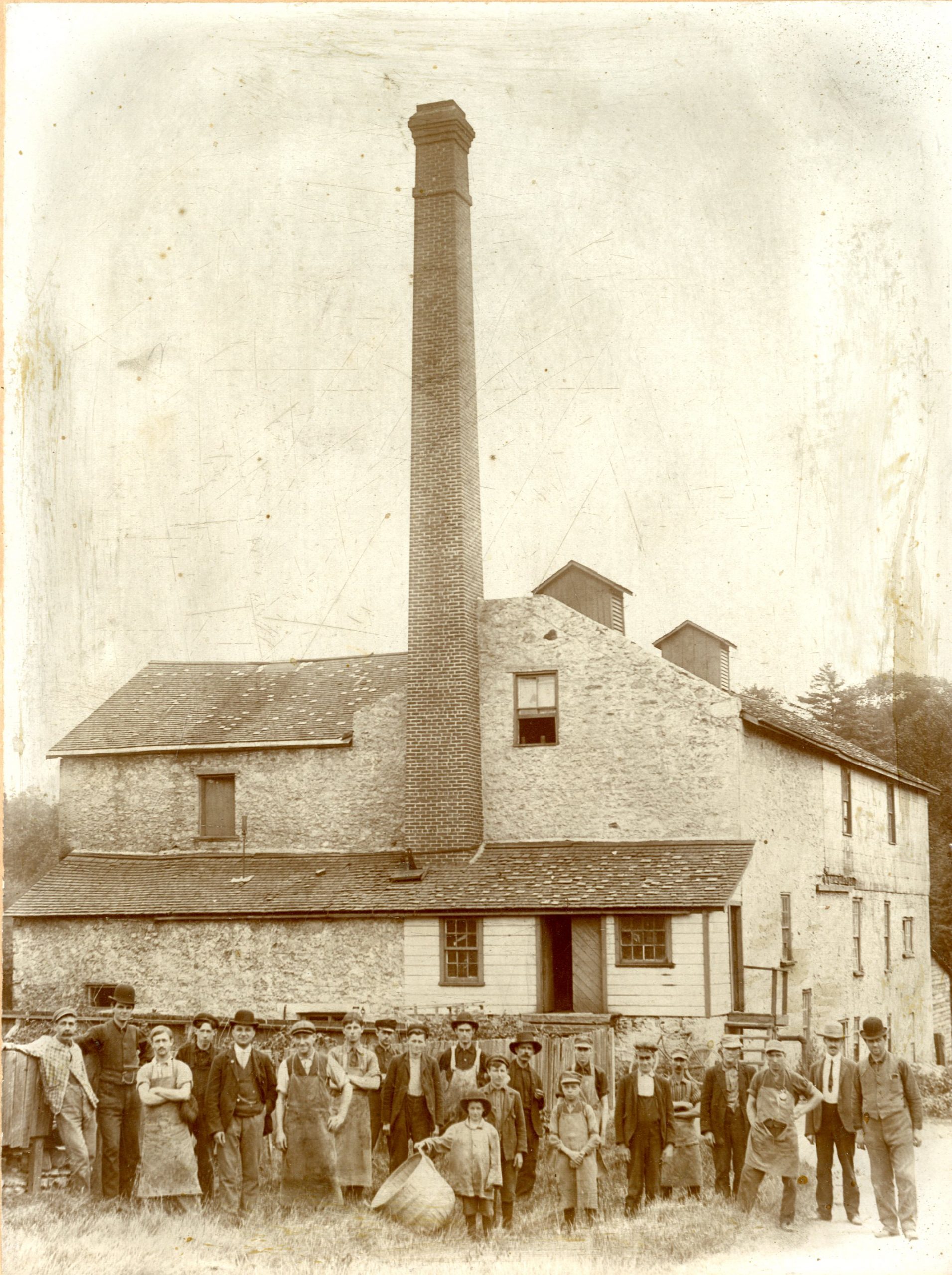 Mill workers – Employees of the Aboyne Flax Mill pose in front of the mill, circa 1890. Wellington County Museum & Archives, ph11264

(In 1990, the County of Wellington put up signs to mark the hamlet of Aboyne, between Fergus and Elora. The signs may have been new, but the hamlet is not. Aboyne was surveyed as a village with a couple of hundred lots in 1855. This concludes an article on the Aboyne mill.)

During its peak years in the late 1870s, the hamlet of Aboyne boasted a population of over 200. Virtually all the economic activity was around the flour mill on the north side of the river, and the flax mill on the south side. Duncan McGowan secured a financial interest in Aboyne when he loaned money to James Henneberry in 1870, and the McGowan family maintained its involvement in the mill for half a century.

The flax mill was owned by the McGowans after 1872, but was leased to other operators until the 1890s. The flour mill ceased operation in 1884. The building deteriorated badly over the next decade, the victim of fire and vandalism. John McGowan purchased it for $125 in 1896; by this time all that was left was the shell of the stone building.

John McGowan was born in Scotland, and spent his early life in Peel township. He eventually inherited his father’s farm and other business interests, including those at Aboyne. He became one of the most prosperous and progressive farmers in the area, raising prize-winning cattle on his 285-acre holding just outside of Alma.

McGowan served as reeve of Peel, and was elected to the Ontario legislature in 1874 as a Conservative. He did not take an active part in the Aboyne flax mill until the early 1890s. Up to that time, the mill had merely separated the flax seed for export and further processing. McGowan began to see a future in the flax business if more of the processing could be done locally.

There was a growing Canadian market for oilcake and for linseed oil, which was a major ingredient of paint, and had other industrial uses. McGowan began producing oilcake in the existing flax mill about 1894. After he acquired what was left of the old Aboyne flour mill, McGowan expanded the business considerably. He hired Udney Richardson, an Elora contractor and future owner of the Elora Mill, to construct a new dam of timber, at a cost of $1,750. The mill building was restored as a four-storey structure, containing new equipment for the extraction and processing of linseed oil.

Local farmers showed a renewed interest in flax in the 1890s, and several Elora businessmen involved themselves in the flax business. John C. Mundell, for example, processed flax in several locations in Elora through the 1890s. He sold the seed and used the fibre for packing material for his furniture. Though no hard evidence exists, it is entirely possible that John McGowan purchased flax seed from Mundell, who in return took the fibre from McGowan’s mill.

McGowan completed his construction work in 1899. Aboyne once more had a substantial industry, and Nichol township council toyed with the idea of building a new bridge. McGowan financed the construction of a 3/4-mile-long railway siding to the mill from the Canadian Pacific line at the eastern edge of Elora. (Portions of the right-of-way can still be detected to the north and east of the Elora quarry). The railway line was finished in the fall of 1902, allowing McGowan to purchase flax from all over the province. He was a major purchaser; in the first two weeks of November of 1902, he bought 80,000 bushels at $1.25 per bushel.

In 1903, McGowan helped organize the Dominion Linseed Oil Company. This was a combination of small operators at Baden, Elora, Owen Sound, Guelph and Montreal. They combined their firms into one company to provide more effective marketing of their linseed oil. McGowan believed that small-town industries had to begin emulating larger concerns in order to survive in the highly-competitive market of the time. He served as vice-president of the new company.

The Aboyne mill continued to be operated by the Dominion Linseed Oil Co. until 1915, under McGowan’s management. A number of factors conspired against the mill. The plant was small and relatively inefficient, and survived until 1915 only because of the policies of the company. Falling prices were encouraging local farmers to move to other crops, and there was a local labour shortage in 1915, because many able-bodied men were in the army.

Meanwhile, John McGowan had continued his political activities. His name was bandied about in the 1890s as a possible candidate for the Patrons of Industry, a farmers’ protest party. By this time, he had acquired the nickname “Honest John” McGowan, and was regarded as a champion of agricultural and small-town interests.

In 1900, the voters of North Wellington sent him to Ottawa as a Conservative, but he was defeated in 1904. He retired from his farm to Elora, where he played an active part in the community, serving on the hydro commission and Elora council.

When the Aboyne mill closed in 1915, John McGowan had repurchased it from the Dominion Linseed Oil Co. A rumour that John C. Mundell would build a new furniture factory on the property persisted for several years, but nothing concrete materialized.

After McGowan’s death, his estate sold the land to the Alabastine Co., which, at the time, was planning for the future expansion of operations at the Elora quarry.

Spring floods soon swept away the dam, and the mill building fell into a state of disrepair and collapse. It stood as a crumbling ruin for several decades.

In 1986, University of Guelph geographer Michael Moss purchased the remnants of the mill and built a residence on the mill site. The house and surrounding landscaping incorporate the surviving remnants of the old walls of the Aboyne mill.

*This column was originally published in the Elora Sentinel on July 9, 1991.