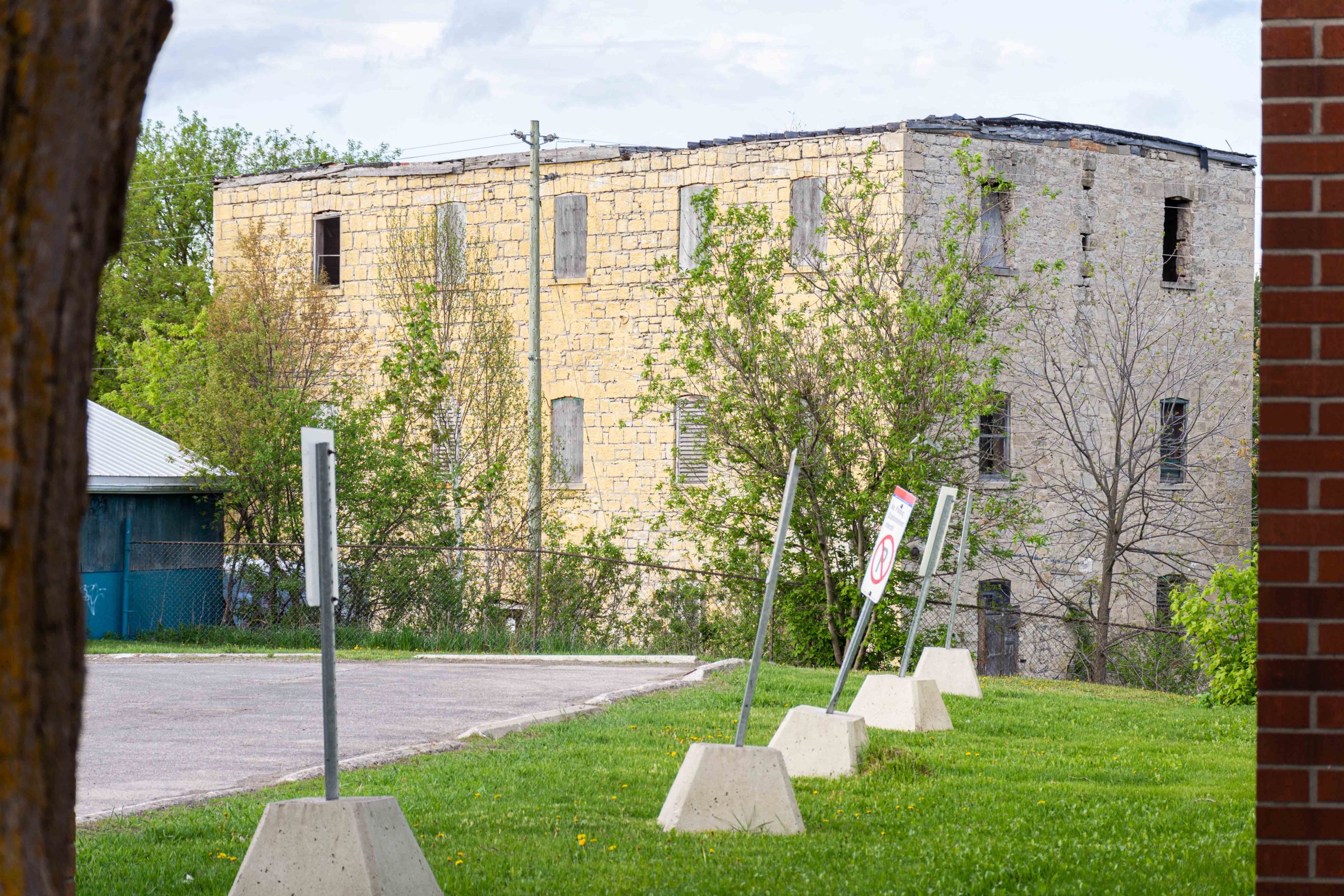 The historic grist mill in Erin, seen from Main Street and framed by the Canada Post office and the All Saints Anglican Church, will become a new county library branch. Photo by Jordan Snobelen

WELLINGTON COUNTY – The Erin Library Building Committee has taken its first tour of a historic grist mill destined to be the county’s newest library branch.

“The size of the beams that are inside that building … it takes your breath away,” committee chair Mary Lloyd told the Advertiser.

Following news on April 28 of the county selecting the former Mundell Lumber property in the village of Erin for the new branch, the library building design committee held its first meeting on May 6.

Consisting of councillors Doug Breen and Earl Campbell; county staff Rebecca Hine, Ken DeHart and Scott Wilson; and library board member Walter Trachsel, committee members discussed their vision for the future branch – one of a marriage between history and modernity.

Preliminary ideas suggest the character of the four-storey historic building, constructed by Daniel McMillan beginning in 1849, will be as much a part of the library as the books to be housed within. 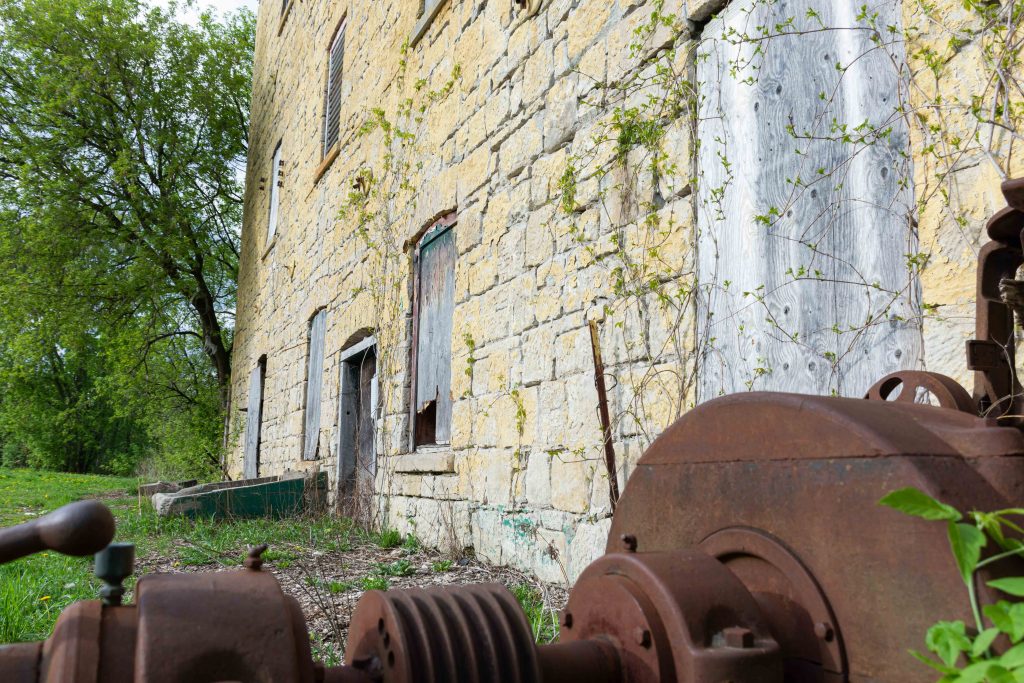 Front of the grist mill where the library’s front entrance will be. Photo by Jordan Snobelen

“The dream,” Lloyd said, is to have a steel, skeletal interior with the building’s stone structure exposed.

A single outside addition is limited to a patio space, to be located at the rear of the building, facing the Credit River running behind the mill.

LEFT: The lower storey of the grist mill is visible at the rear of the building where an outdoor patio space will be, facing the Credit River. RIGHT: The Credit River, as seen from Water Street, running north-west toward the historic grist mill in Erin. Photos by Jordan Snobelen

The grist mill provides the county with a “tremendous opportunity” to reinvigorate for modern use an otherwise forsaken building, Lloyd said.

“We’re certainly going to be creating a great historical preservation of Erin.”

The building will be environmentally friendly, and the county’s accessibility committee will also provide input on the branch’s design.

Plus VG Architects, a Toronto-based firm specializing in “retrofit and adaptive re-use, and conservation of heritage-designated buildings,” according to its website, has been retained to draw up designs for the new branch. 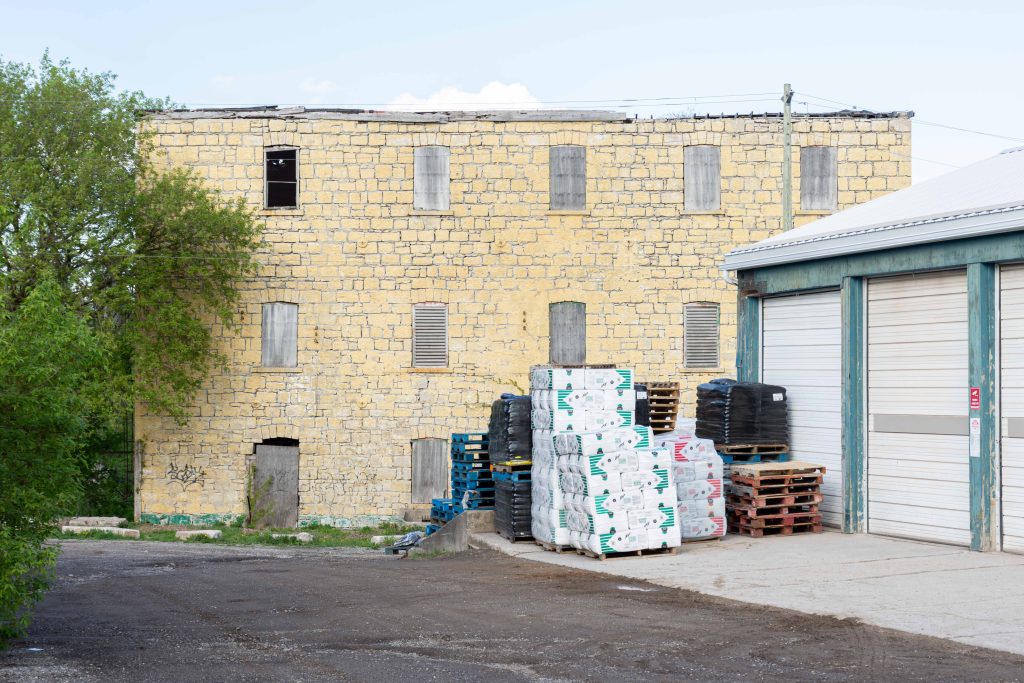 The front face of the grist mill, seen from the lot of Budson Farm and Feed Company, off Main Street in Erin. Photo by Jordan Snobelen

The property sale closes at the end of May, with an invite-only presentation to follow in June, aimed at soliciting design and project feedback from community groups.

“Erin has some public spaces, but it doesn’t have a lot of public spaces, and with the anticipated growth … that’s a whole new population coming into a community that deserves a great new library to use,” Lloyd said. “We want the public to embrace and love what we’re hoping to do there.”

The current Erin branch, run out of Centre 2000, has limited space and lacks programming such as mom and tot readings or book clubs.

It also happens that a lease for the space, with the Upper Grand District School Board, ends in 2025. 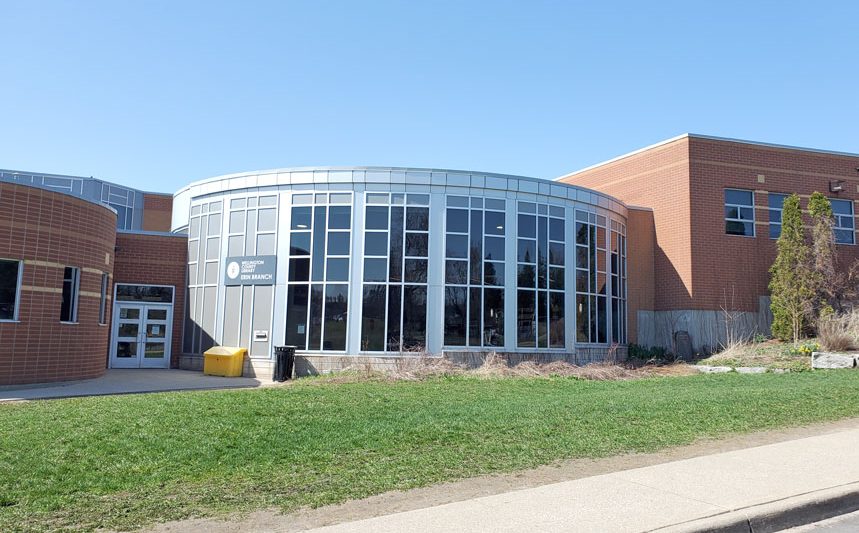 The current County of Wellington Library in Erin village is located in Centre 2000, a multi-use facility which also houses the community’s high school, arena and a live theatre venue. Photo by Chris Daponte

“We have a lot of shortfalls [in programming] in that branch that we are able to provide in all of our other [13] branches,” Lloyd said.

With a rise in property, real estate, and construction costs in the past two years, Lloyd said the pursuit of a home for the new branch took on a sense of urgency.

Over a span of 18 months, between three and four locations were examined, according to CAO Scott Wilson.

“We didn’t look for that many sites at any other library I’ve been involved in,” Wilson remarked to a reporter.

Some of the other properties examined, Lloyd said, changed hands so quickly the county was forced to move on.

“Having a brisk real estate market really does not bode well for municipal government because we have several processes that we have to go through to purchase,” she explained.

Wilson said some locations not up for sale were speculated on, but ultimately the choice came down to the mill’s appeal, and the property’s potential for county-owned housing options – something to come later. 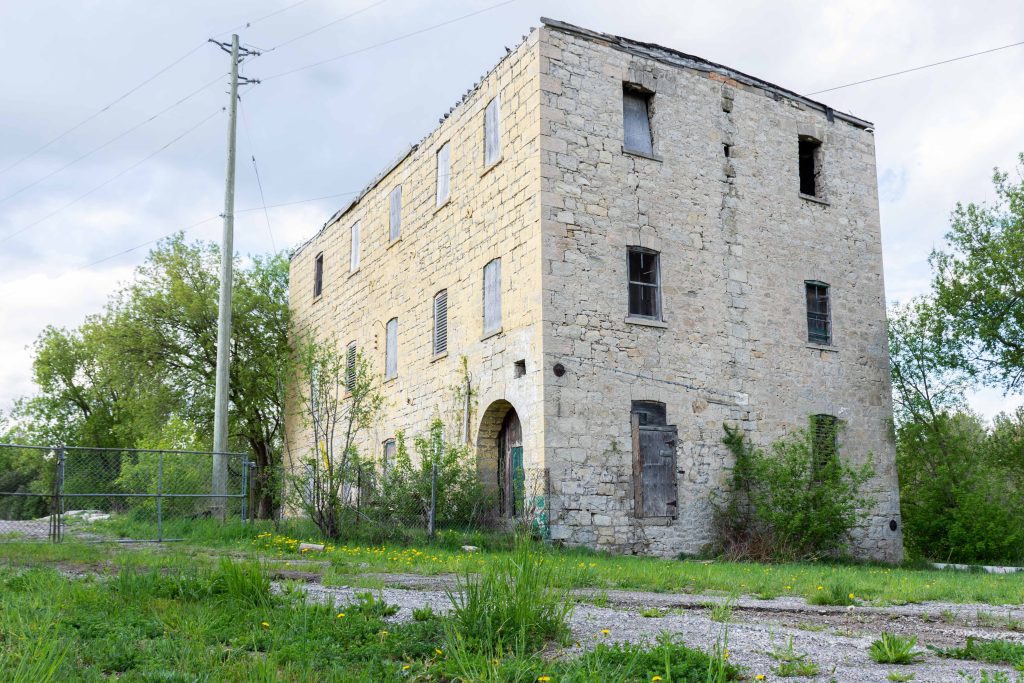 The front face and easterly wall of the grist mill. Photo by Jordan Snobelen

The CAO would not disclose the purchase price of the property, only divulging an offer had been accepted and more would become public after the sale formally closed.

It’s expected $7.5 million will be spent on construction over three years from 2022-24, with $1.55 million allotted in this year’s budget. True costs will emerge once construction quotes are received and a contract for the build is awarded.

Chief librarian Rebecca Hine pictures the new branch as a community hub with something for everyone — room for programming, community meeting space, study spaces, areas for artwork displays and, of course, an easily accessible catalogue of loanable materials.

“Libraries really contribute to vibrant downtowns, and it was just a great location right in the heart of Erin, so I couldn’t ask for a better location,” Hine said.

Once the sale closes, Hine suggested work would begin quickly: “We plan on moving ahead with the library project immediately.”

But the best laid plans will be at the mercy of a new term of county council, which could consist of new faces and different ideas, following October’s municipal election.

It’ll be closer to the end of the year by the time feedback is compiled and translated by Plus VG Architects into a tenderable building design, to be first considered by the library board for approval, and then county council.