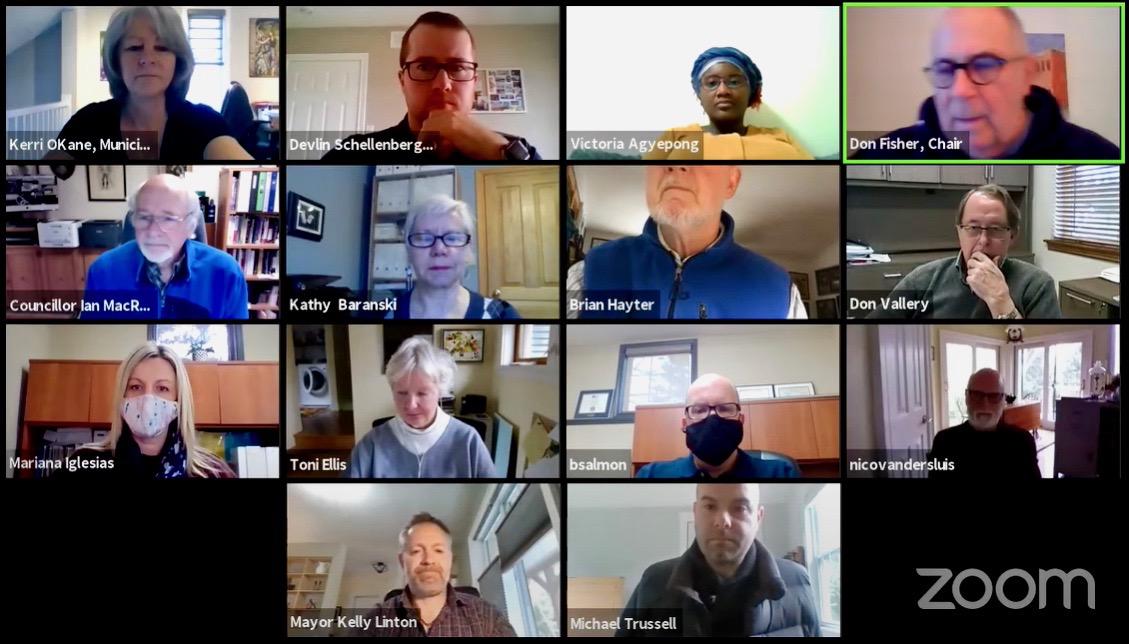 (Image from Centre Wellington's Healthy Growth Committee meeting on May 5).

The report, completed by rural planning and development graduate students, also finds the cost of home ownership has to come down for households earning less than $94,000 to have any hope of owning a home in the township.

Victoria Agyepong, one of the graduate students, presented the report to the Centre Wellington Healthy Growth Committee on May 5.

The committee is working on an attainable housing strategy for the township, and the report by the students was both timely and helped shape discussion as the committee plans its next steps.

Agyepong and project partners Dawson McKenzie and Rachel Suffern found that 82 per cent of people living in Centre Wellington are homeowners, while just 18% are renters.

A healthier target is for 30% of housing stock to be rentals and the report recommended aiming for that target.

The National Housing Strategy recommends that housing should comprise 30% of a household budget. That means home ownership in Centre Wellington now requires a median income of $94,000, Agyepong said.

A look at age demographics indicates Centre Wellington has a higher proportion of seniors than the provincial average.

Employment stats indicate a need for short-term rentals of two or three-month terms rather than the standard one-year lease to accommodate seasonal workers in both tourism and agriculture sectors.

Broadly, the report recommends changing policies to facilitate construction of secondary units in single-family homes and live-work units, and providing incentives for builders to include a mix of housing in subdivision plans, including rentals.

Committee member Don Vallery wondered if the township could require builders to rough-in plumbing for basement units in new builds, making it easier for a homeowner to add a basement rental should they want to.

“That would lay the tracks for growth in rentals,” he said.

Brett Salmon, managing director if planning and development, said incentives are in place in the Development Charges Act if a new build has four or more rental units. In this scenario development charges (DCs) can be paid in instalments instead of up front.

“That’s quit a bit of a bonus for a developer,” Salmon said, adding a community improvement program could broaden the scope of these kinds of incentives to include more building types.

Committee member Toni Ellis wondered if AirBnBs could be encouraged to provide short-term rentals, to meet the needs of seasonal workers, rather than just weekend rentals for tourists.

With tourism at an all-time low due to stay-at-home orders, “it seems there’s an opportunity, as they are already built and probably vacant,” she said.

The Healthy Growth Committee has divided into two sub-committees – one looking at policy changes and the other at financial programs – and Mayor Kelly Linton said a Wellington County working group will follow a similar format as the county develops its plan for affordable housing.

As he sits on both committees, Linton, who is also warden of Wellington County, said he’d act as a liaison between the township and the county and suggested there will be opportunities to work together on common goals.

“It’s important to me that we drive to action as fast as possible,” Linton said.

The committee voted to use the definition of attainable housing provided in the University of Guelph student report: “Housing that costs up to 30% of a household’s gross income, with the household income ranging from 80 to 120 per cent of local median income. Beyond financial considerations, the housing should accommodate all people through all stages of life as needs and means change, while being both available and sustainable.”

Reports and recommendations by the committee will go to council for approval as they are developed and finalized.