Those were the sombre words of Dr. Nicola Mercer, Medical officer of Health and CEO of Wellington-Dufferin-Guelph Public Health (WDGPH), to Wellington County council via teleconference on April 30.

Tenenbaum presented data based on models developed by University of Toronto and University of Guelph researchers designed to show how COVID-19 would spread in Ontario over a period of two years, and how it would impact the health system.

The model included a comparison of three Wellington-Dufferin-Guelph-specific scenarios based on physical distancing implemented for different lengths of time:

Tenenbaum noted the need to build certain assumptions into the model means a range of results is possible.

Assumptions in the model included:

Tenenbaum explained the model looks at impacts over a two-year period because it could take that long to effectively stop the spread of the virus.

“Best estimates suggest that we could be looking at at least 18 months, perhaps two years or longer, before we have an effective vaccine … so that’s why we’re looking at a two-year time span,” he said 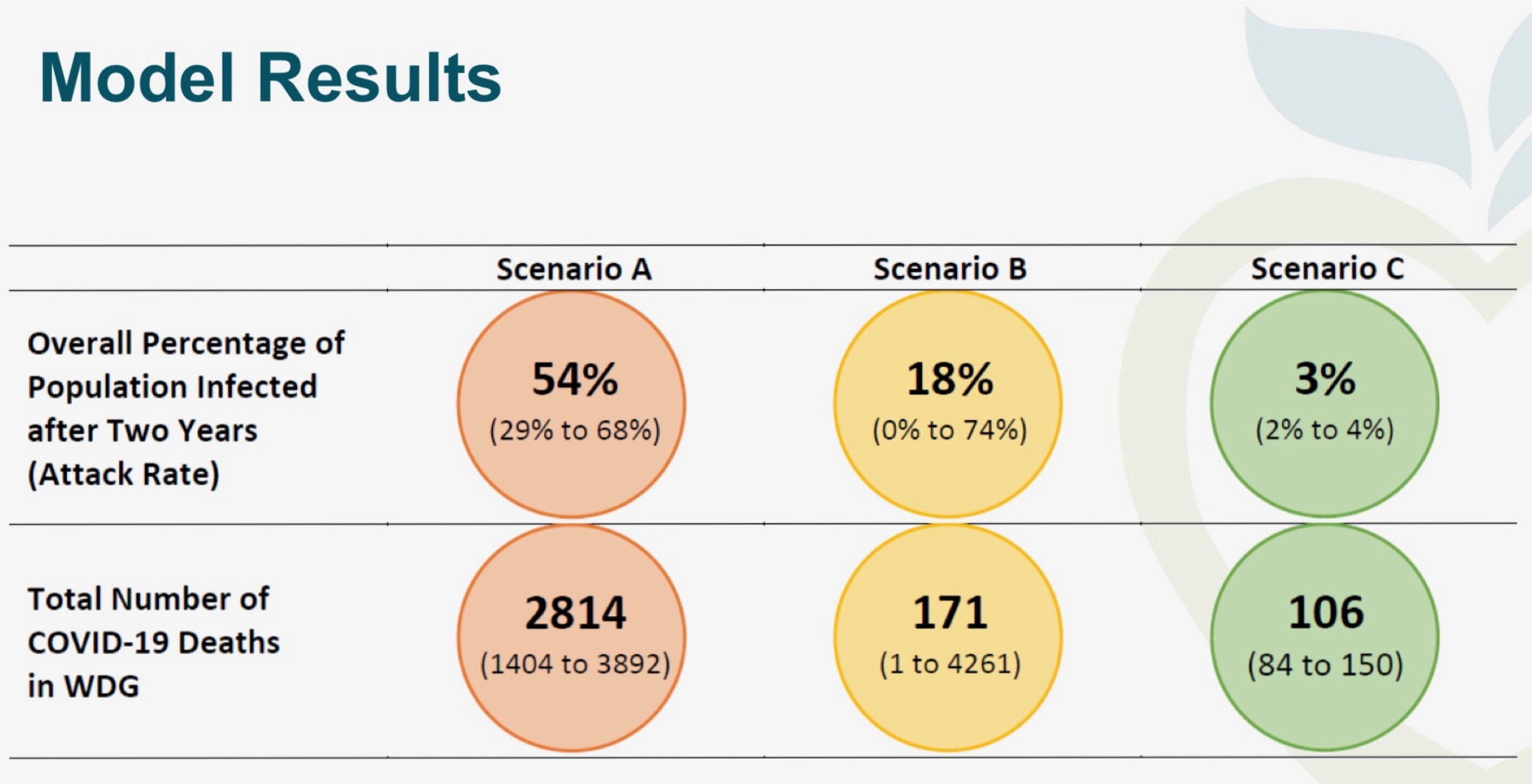 The modelling indicates Scenario C, in which physical distancing measures fluctuate based on health system capacity, results in both the fewest cases and fewest deaths of the three scenarios considered. The scenario also produced the narrowest range of potential results.

Under Scenario A, with physical distancing ending after three months, the overall percentage of population infected after two years is projected at 54% (with a range of 29 to 68%) and the total number of deaths in the WDGPH region projected at 2,814 (range of 1,404 to 3,892).

Under Scenario B, with physical distancing measures maintained for 12 months, the overall percentage of population infected after two years was projected at 18% (range: 0 to 74%) and the number of deaths at 171 (range: 1 to 4,261).

Under Scenario C, with physical distancing measures implemented in a dynamic manner based on ICU capacity, the overall percentage of population infected after two years was projected at just 3% (range: 2 to 4%) and total deaths at 106 (range: 84 to 150).

“Which means there is a lot of uncertainty about exactly where we would land,” he noted.

Considering Scenario C, Tenenbaum stated, “106 deaths, to be clear, is a significant number, but it is a much smaller number; it is an order of magnitude different, from the kind of number we could see in Scenario A. And those create very different kinds of challenges for our community and challenges for our health system as a consequence.”

Tenenbaum pointed out the modelling shows Scenario A would result in hospitalizations in the region reaching 400 to 450 people a day for a period of about 80 to 100 days after physical distancing measures are stopped, while the fluctuating hospitalization rates in Scenario C are much lower and more manageable.

“What this scenario (C) looks at is turning on and turning off physical distancing to manage that pressure on our critical care resources,” Tenenbaum noted.

“In addition to helping to manage the health system pressures, this scenario would allow society as a whole to kind of come up for air between strict periods of physical distancing.”

He added, “The key meaning of this is that the decisions that are being made about physical distancing and how long it will be implemented have really significant impacts on the kind of reality we’re going to see.

Tenenbaum continued, “So it is really important for all of us … to really keep an eye on what’s going on with decision-makers on this question of physical distancing.

“And it’s important to note that even though we may be on one trajectory right now, if decisions are made about how we are going to change or roll back the distancing measures we have in place that will change the trajectory we are on and it really should change our expectations about the kind of reality that we plan for.”

Councillor Dianne Ballantyne asked why that is the case, given “Scenario C seems to be the most focused on public health, if we define public health as the number of deaths.”

Noting she couldn’t speak for the CMO, Mercer said, “I think part of the challenge with Scenario C is the political palatability to turn off and on our economy.”

She added that “public fatigue” with restrictions is a concern.

“What you begin to see is measures that people take behind the scenes to try and get around any of these measures that the province puts into play,” Mercer stated.

“I would not want to be the decision-maker right now, trying to balance which good and which bad are we going to accept over this period of time.”

In response to questions from councillors regarding the impacts of measures like school re-openings or lifting of border restrictions, Tenenbaum explained such factors aren’t accounted for in the modelling.

“It does not factor in people entering Ontario, people leaving Ontario, who may or may not be ill,” he explained.

“If there is a decision made that borders are open and travel increased, then this model could change drastically, is that fair to say?” asked councillor James Seeley.