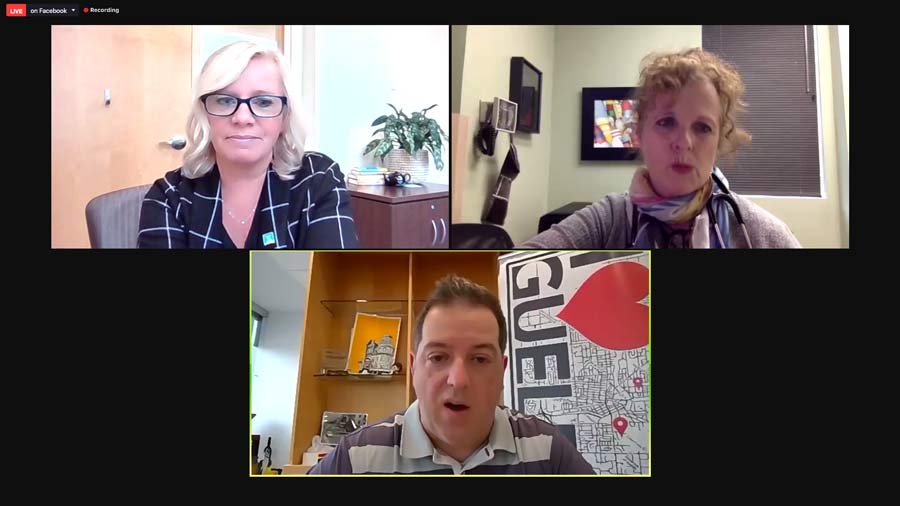 Helen Fishburn, left, Dr. Anne-Marie Zajdlik, and Guelph Mayor Cam Guthrie talked about the days of hope that are coming once this pandemic is over. The two health experts were guests of Guthrie’s Mayor’s Event for Mental Health on Oct. 6. (Virtual event screen shot)

GUELPH – After a miserable and exhausting 18 months for just about everyone, where the world went into lockdown, jobs were lost, the economy tanked, schools were closed, social events were kyboshed, hospitals were overrun, and fear of this mysterious coronavirus took hold, two local health experts insist the pandemic is nearing its end.

“We may be running out of fuel, but there’s not much fuel left for the virus either,” said Dr. Anne-Marie Zajdlik family physician and HIV/AIDS specialist. “The days of the pandemic are numbered.”

The event, called The Path Forward, was virtual and attendees were able to ask questions of the panelists.

Fishburn said adapting and adjusting to the pandemic has been exhausting and it has worn us all down. People who have never experienced depression or anxiety before are shocked to be overwhelmed by it now.

But the way forward is hope, both speakers agreed. And there is much to be hopeful for.

“We’re doing well with COVID,” Zajdlik said. “The worst-case scenario did not materialize, and the best case did. The fourth wave, driven by the Delta variant, was not as disastrous because we have the vaccine.”

And the vaccine is safe and effective, she said.

“COVID-19 will go from pandemic to endemic,” she said, adding that means it will be manageable for hospitals.

“Very few viruses are fully-eradicated. The vaccine will prevent it from remaining serious and widespread. We’re months away (from this), not years.”

Zajdlik said approval for Pfizer and Moderna for children under 12 is expected by November or December, “and that’s another reason for hope.”

Fishburn said misinformation has caused a deep divide between vaccinated and unvaccinated people which has led to conflict in families, workplaces and within communities.

“It’s not surprising. This is a life-or-death issue. But misinformation has contributed to the intensity and angst,” she said.

Zajdlik was asked if there is concern about a new variant.

“The Delta variant is so deadly and transmissible, no other variants can compete so far,” she said. “That’s the biology of viruses.

“My concern is in resource-poor countries. When we’re all vaccinated and our numbers come down, we have to reach out to these other countries. Mutations happen. That’s what leads to variants. So that doesn’t happen, we need to vaccinate everyone in the world.”

Mental illness has long been stigmatized and the pandemic has been called the great equalizer in that 80% of the population is now suffering from some form of mental illness.

“That’s the majority,” Zajdlik said. “But mental health is like any other health issue. We need to get to the point where it’s natural and normal to seek help.”

Fishburn added, “You would not tell someone with cancer to pull up their socks. Why say that to someone with depression?”

“The reward to me is to see someone get better,” Zajdlik said. “There’s nothing better than getting better.”

Fishburn said it will help everyone if mental health can become part of normal conversation.

Instead of asking “How are you?” ask more pointed questions, like “How are you managing your anxiety?” or “You seem down. Are you getting help?”

“That’s how we make mental health part of the conversation,” Fishburn said.

The Mayor’s Event for Mental Health was started in 2000 by then-Mayor Joe Young to coincide with World Mental Health Day on Oct. 10.