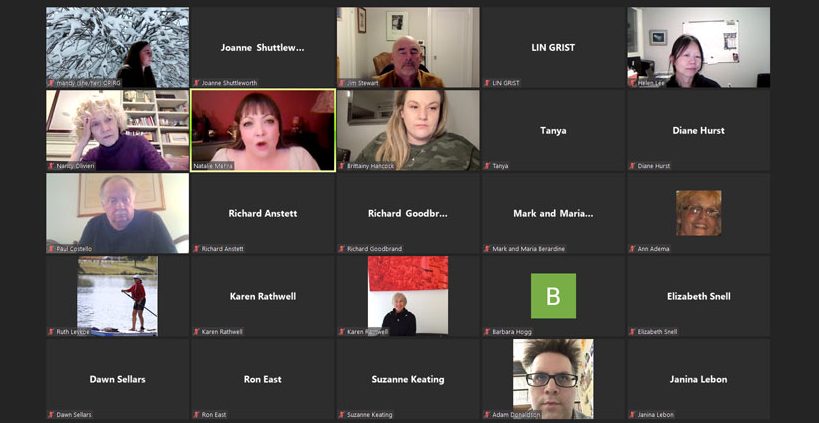 Panellists discussed health care at an Informed Democracy session on March 9. Health care should be an election issue and privatization is the enemy, speakers said. (Event screenshot)

GUELPH – The enemy of a robust public health care system is privatization and the time to do something about it is during the provincial election.

That was the overriding sentiment of a panel of speakers in the Informed Democracy series presented by the Guelph Wellington Coalition for Social Justice.

The second session in the series, held via Zoom on March 9, focused on health care and Premier Doug Ford government’s agenda to allow services like home care, pharmacies, diagnostic clinics, and even hospitals, to be run by private, for-profit businesses, they said.

Dr. Nancy Olivieri, a hematologist by trade who has spent years fighting “big pharma” and its hold on universities and their scientific research, said the Conservatives use many euphemisms in their health care announcements but they all are opening the door for businesses to operate health care facilities.

She said some of these announcements are couched in the province’s pandemic response – such as allowing “alternative health facilities” to help address a backlog in surgeries, allowing private pharmacies to administer COVID-19 vaccines and private businesses to take over COVID-19 testing.

Olivieri said health minister Christine Elliott let the province’s true agenda slip when she suggested in February there would be an expansion of private hospitals to help address surgical backlogs.

“Ford wants to defund, disable and then destroy” public healthcare, she said. “Privatization benefits only the wealthy.”

Helen Lee said long-term care and retirement homes are already largely privatized and the pandemic has clearly shown the differences in care between public and private facilities.

She said private long-term care homes have less staff on duty and pay lower wages than public facilities and that leads to worse care for residents.

That all became evident early in the pandemic, when more residents in private long-term care facilities died than in public facilities.

Bill 208, which was passed by the Conservatives last year, protects private facilities from liability during the pandemic and Bill 37 “enshrines” for-profit healthcare, she said.

“We don’t want privatization to creep into public healthcare,” she said. “We need a shift in culture.”

Natalie Mehra is the executive director of the Ontario Health Coalition and she told the story of “Margaret” who lived in a for-profit long-term care facility and died not because of COVID-19 but from a blister that became infected and was left untreated due to a shortage of staff at the home.

“Margaret was a casualty of COVID but she died from a lack of care and negligence,” Mehra said, adding Doug Ford suspended inspections of these facilities during the pandemic and has lowered the standard for a passing grade.

“We have to set these issues as key election issues,” she said.

Jim Stewart, chair of the Waterloo Region Health Coalition, put up a list of legislation the Conservatives passed or attempted to pass between 2019 and now – legislation that has capped salary increases for nurses in public facilities at one per cent, that has limited liability for privately-owned nursing homes, that will privatize all of home care, and that proposes giving 30-year licenses to private for-profit long term care companies.

He pointed to Scotland’s National Health Service as the gold standard in health care, with expectations such as 18 weeks from diagnosis to post-surgery and a system that includes dental and pharmacare.

Stewart noted that since COVID-19 has essentially dismantled the health system anyway, there is the opportunity to build it back better, but that requires keeping healthcare in public hands – and an infusion of funding.

He lauded the proposed Bill 13, a private member bill by Teresa Armstrong, MPP for London-Fanshaw.

Called the Time to Care Act, the bill proposes a minimum standard of care in long-term care of four hours of care per day, per patient.

“If that came back it would be powerful and beneficial,” Stewart said.

There are two more sessions in the Informed Democracy series: April 6 is about education and April 20 focuses on climate change.