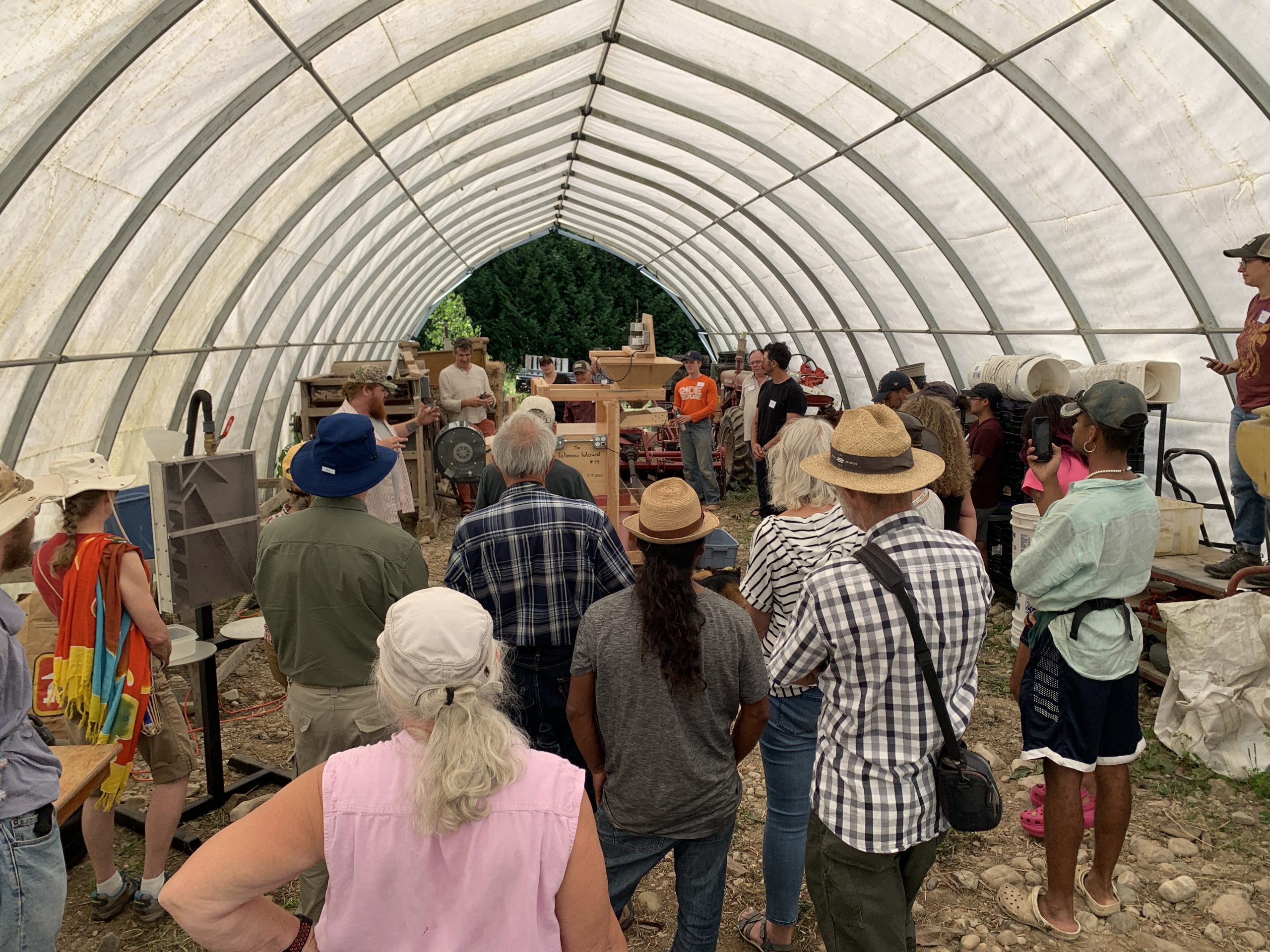 Around 36 people gathered at Hawthorn Farm Organic Seeds in Palmerston on Aug. 19 to learn about the successes and challenges of seed saving. (Photo by Jordan Snobelen)

PALMERSTON – After a field tour during a recent mid-summer afternoon, a group of around 36 people gathered under a large caterpillar tunnel at Hawthorn Farm Organic Seeds to learn how to clean the seeds grown at the farm as part of an event put on by the Ecological Farmers Association of Ontario (EFAO), in partnership with the Bauta Family Initiative on Canadian Seed Security.

Unlike most larger seed companies, Hawthorn isn’t only a seed house.

Since 2008, Kim Delany has grown, harvested, processed, tested, packaged and distributed the organically-certified vegetable, herb, and flower seeds grown on four acres, in addition to three other farm properties. Adequate spacing between crop types is vital for controlling cross-pollination and contamination.

Sam, a German Shepherd, nosed around the group as Hawthorn employees Aaron Lyons and Steven Sergenese demonstrated how seeds are cleaned through threshing, screening and winnowing—be it by hand, in a three-gallon bucket outfitted with a rod (chains at one end and a drill at the other), flailed by the “Roto-Hoe,” separated in a zig-zag air column, or by the main attraction, the Winnow Wizard.

Regardless of the method chosen to fit the seed being cleaned, the goal remains the same: to separate seed from husk and chaff, leaving only cleaned seed ready for packaging, sale, and safe keeping.

An eclectic mix of young and old looked on as the Winnow Wizard, with it’s furnace fan attached at one end, blew air through a concentrated channel of screens toward falling cabbage seeds at the other end.

Buckets placed at different distances caught either seeds or husks and chaff, depending on the strength of the air being blown through. As the controlled air hits the heavier seeds falling from a 45-litre hopper, they fall into the first bucket, whereas the lighter, unwanted debris is blown into farther buckets.

The whole outfit, produced by Markael Luterra in the United States, cost Hawthorn around $6,500 Canadian dollars.

Duane Falk, wearing a straw hat and a grey and white beard, remarked to the group that the Winnow Wizard is essentially a modernized take on the rusting 1891 Clipper sitting in the background.

In the 1800s, Falk said, every farm would have had one of the classic machines, manufactured in Michigan.

Falk, a potato breeder and professor emeritus at the University of Guelph’s plant agriculture department, brought field peas from the land he farms in Erin.

Pulling from the collection of matted plants, Falk stomped his foot onto the dried legumes, breaking down the weedy-looking crop before kicking the Roto-Hoe to life, its flails liberating the peas from their pods. 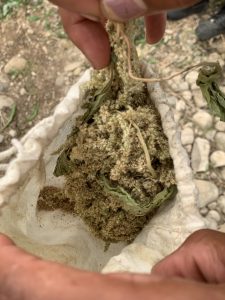 Ekow Stone, a youth engagement coordinator at FoodShare Toronto, brought amaranth from Ghana, the tiny seeds pooled at the bottom of a cloth sack.

Stone made the journey from Etobicoke, hoping to return to the urban farm plots with some new ideas for seed saving.

“Our seed is the basis of our food system,” EFAO seed program manager Rebecca Ivanoff told the Advertiser.

The goal of the demonstration is simple: to bring like-minded people together to share knowledge and resources for saving seed.

In a later conversation, Delany said seed saving was a “lot art” merely a decade ago.

As the public’s focus on food turned inward over recent years, especially as the pandemic brought home the fragility of relying on a global market, a desire to save seed for the future followed suit.

Seeds from food grown today become another season’s supply. The cream of the crop can also be bred to hone in on a strain which thrives locally.

Delany did exactly that with San Marzano tomato seeds, native to Italy, and bred a local variety of the sweet heirloom tomato.

Gardeners and backyard seed-savers alike enjoy the cyclical connection to the their food, Delany said.

Growing local seed, she said, is to keep the “ability to feed ourselves in the hands of the people.

The seed cleaning event was a yearly affair paused by the pandemic. Delany is happy to be “back into the groove” and to see growing interest in seed saving.