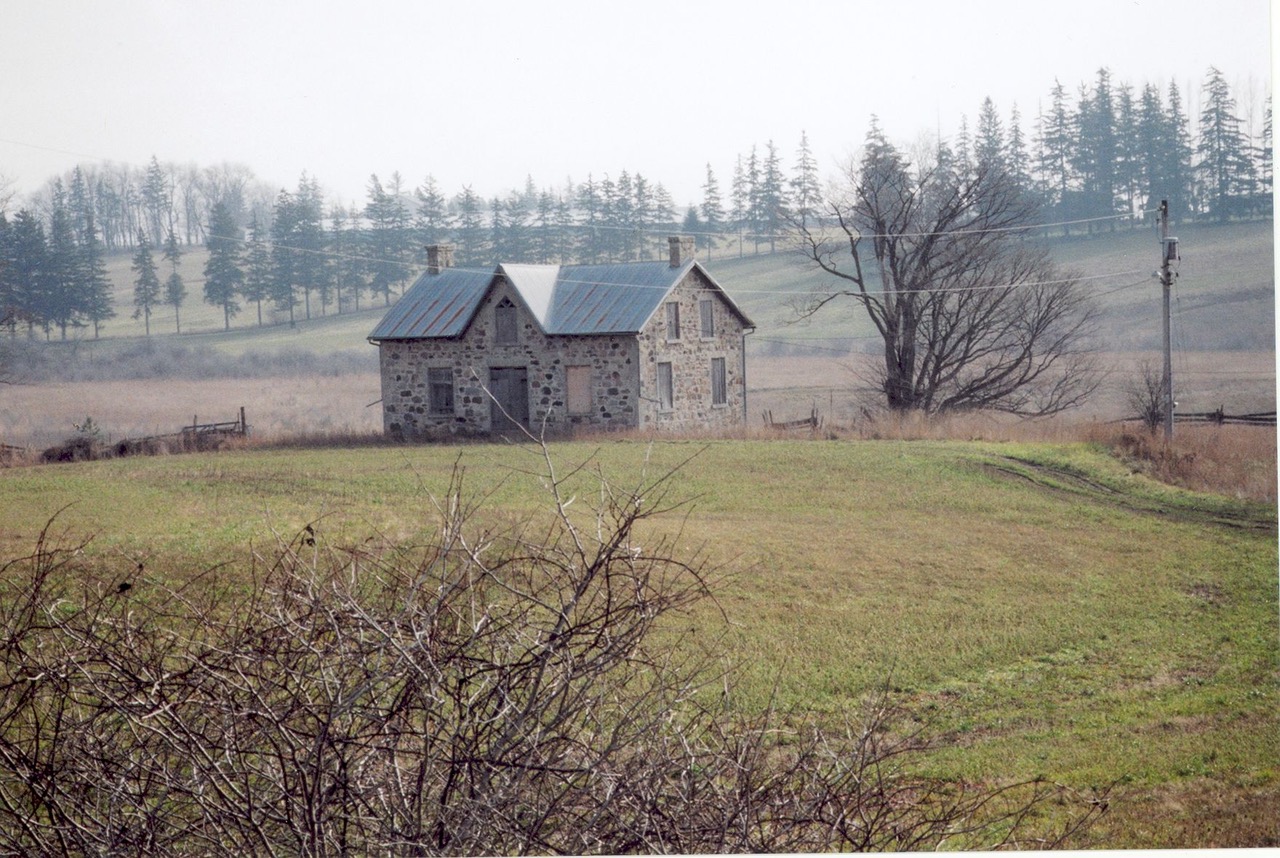 Any ghosts here? – The Haig house, south of Elora, is one of the oldest stone buildings in Pilkington, dating to 1850, or a year or two earlier. It was built by Robert Haig Sr. His children, William, James and Annie, sold the property in 1905 to John Kelly, and moved away. With two brief exceptions, the house has been empty ever since. It is located on the west side of Wellington Road 7 at Sideroad 4, just south of Elora. This photo dates from 2004. Wellington County Museum & Archives, ph19190

*Editor’s note: The stone house referred to in this column is located on private property and is currently used by its owners. Trespassing is not permitted.

A couple of miles south of Elora, a few hundred feet west of the Guelph highway (Wellington Road 7 and Sideroad 4), an old stone house has stood vacant for many decades. It is known to many as “the haunted house.”

Over the years, a great deal of lore, based on untimely deaths, has been retold and rewritten in articles about this house.

The truth is far less mysterious.

The property, in the valley of Swan creek, which runs through its middle, attracted one of the first settlers to the area. John Miller, known as “Yankee” Miller, arrived here in 1823 or 1824, and began farming. He was a squatter and never had title to the property, but he stayed for almost 20 years.

It is now generally known as Swan creek, after another pioneer family.

Yankee Miller’s wife died in 1838, and she was buried on the farm. Miller carved a tombstone by hand for the grave. Mrs. Miller’s death provided the start for the ghost cult associated with the farm.

Nothing more is known of the fate of Yankee Miller. He was followed on the farm by the Haig family. Robert Haig Sr., with his wife Ann, sons Robert Jr., James and William, and daughter Annie, arrived sometime in the 1840s, though the family did not acquire title to the property until 1862.

At the time, virtually all the farm houses in the neighbourhood were of log. It appears that the Haig house, built of the fieldstones that once littered the farm, is one of the oldest surviving residential structures in the township.

Robert Haig Jr. is the best-known member of the family. Crippled with a bad leg, he was useless around the farm. He soon moved to Elora, around 1850, to work as a clerk for James Philip, the Elora distiller, miller and merchant.

Robert boarded in Elora with Philip, in a household that also included Robert Philip, George Fraser, Philip’s teamster, and George Duncan, another clerk.

When Philip lost his shirt as a result of the over-expansion of his business in the late 1850s, Haig and George Duncan set up their own business as accountants and produce agents. They operated from the Elora Mill office (the small red brick building that still stands at the entrance to the Elora Mill property), and handled the paperwork for mill owner James Fraser.

Bob Haig also secured the position of postmaster, and the Elora post office was located in this building during this period.

The Haig and Duncan partnership did not succeed, and Haig was forced to depend on his position as postmaster to survive. His good fortune came to an end in 1861, when he lost the postmastership.

It was a purely political move, engineered by Dr. William Clarke, the Conservative MP for North Wellington, and George Drew, an Elora lawyer. (Ontario premier George Drew was his grandson. The family lived in the house that is now known as the Drew House Bed and Breakfast on Mill Sreet).

Clarke and Drew arranged to have the job given to Dr. John Finlayson, a snobbish and disobliging Englishman, but a loyal party heeler. Elora’s Reformers and the majority of its Conservatives protested loudly, but were unsuccessful in having Haig reinstated.

Bob Haig tried in vain to secure employment as a clerk or bookkeeper. With his bad leg, opportunities for him were limited. He went back to the farm and, after several months of despondency, drowned himself in Swan creek, at the rear of the stone house.

The house and farm remained in the Haig family until 1905, occupied by James and William Haig and their spinster sister, Annie. When they left the farm, the brothers were 86 and 75 years old, and Annie was 79. Nothing is known of the last years of the brothers, but Annie moved to the United States, presumably to live with relatives.

The Haig farm was purchased by John Kelly, who owned the farm immediately to the south. Except for one winter, when hired help occupied it, Kelly did not need the house, and he boarded it up.

The house and farm passed in turn to John Kelly’s son, John, in 1941. The final occupation of the Haig House took place over the winter of 1918-19, when Union School Section No. 8 moved in for part of the school year in November of 1918, after a storm severely damaged the roof and caused other damage to the No. 8 schoolhouse on the Elora-Guelph Road.

John Kelly was one of the school trustees that year, and he allowed the old house to be used for the school until the repairs could be completed.

A few changes were made inside; the desks were brought in and someone found a wood-fired box stove, which kept the building warm over the winter. There are still a few people in the area who remember the adventure of attending school at the Haig House.

The old stone house survived the tornado of 1923. The Haig House missed the path of the cyclone by a few feet, and suffered only minor damage. An old log barn near the house was reduced to kindling. On the Kelly farm across the creek, the storm frightened a team of horses, and in the terror and panic, William Farrelly, a farm worker, was hurled against a fencepost and killed.

Ghost stories concerning the old Haig homestead were in circulation by the 1920s, based on the death of Mrs. Miller and Bob Haig’s suicide. Some may even have been started at the school in 1918, by older children having some fun by frightening their younger classmates.

A number of stories have been published about the house over the years. These have often garbled and embellished the facts, adding to the haunted house legend, which has grown over the years since the last member of the Haig family moved away in 1905.

One version has all members of the Haig family dying early or mysterious deaths.

In truth, the house is a perfect setting for a ghost legend. It looks old, with a slightly gothic appearance.

On a moonlit night, with mist rising from the creek, it does not take much imagination to visualize spirits from the past lurking inside and around the old stone walls.

*This column was originally published in the Elora Sentinel on Oct. 15, 1991.