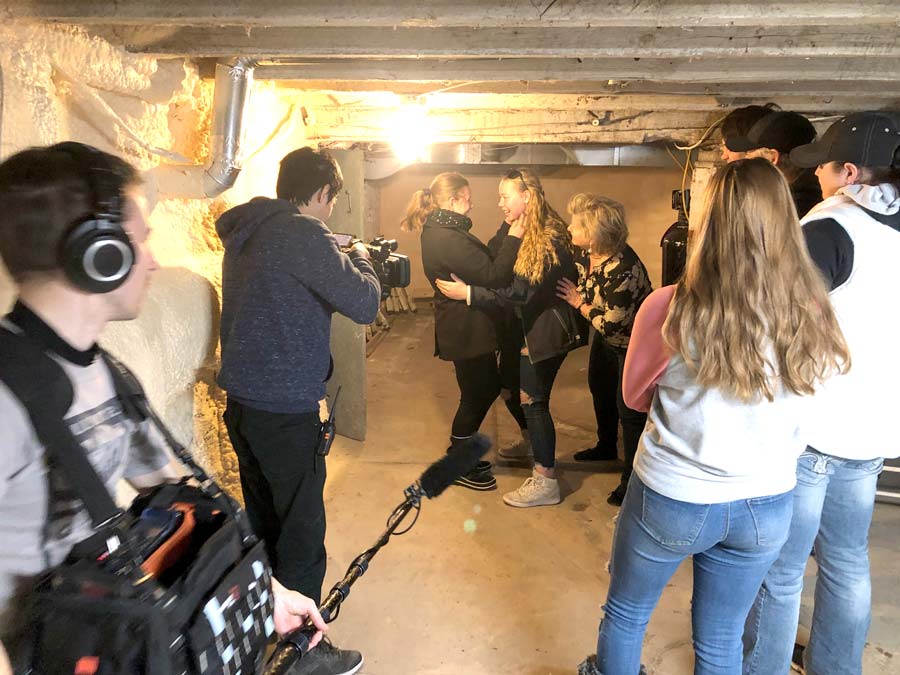 Local film shoot - Tailored Films and Makama Films were busy shooting scenes for a horror/thriller film in the Town of Minto between Nov. 7 and 26. Director Ali Akbar Akbar Kamal second from left, filming a scene in the basement of a Harriston home.
Photos by Patrick Raftis

HARRISTON – This community became a sort of Hollywood North Wellington for a few weeks last month, as an independent film crew featured the town and some area residents in an upcoming movie.

Tailored Films and Makama Films were busy shooting scenes for a horror/thriller film in the area between Nov. 7 and 26.

Godforsaken, written and directed by Ali Akbar Akbar Kamal, features locations in the town of Harriston and village of Clifford, several local residents in supporting roles, and a large crew of local extras.

The film stars Harriston native Chad Tailor, a graduate and current faculty member of the Toronto Film School, who has collaborated with Kamal and Mariah MacDonald on several independent productions. Other productions filmed locally include A Done Deal (2013), and the short films The White Samurai (2014) and Arkham’s Journal (2015). 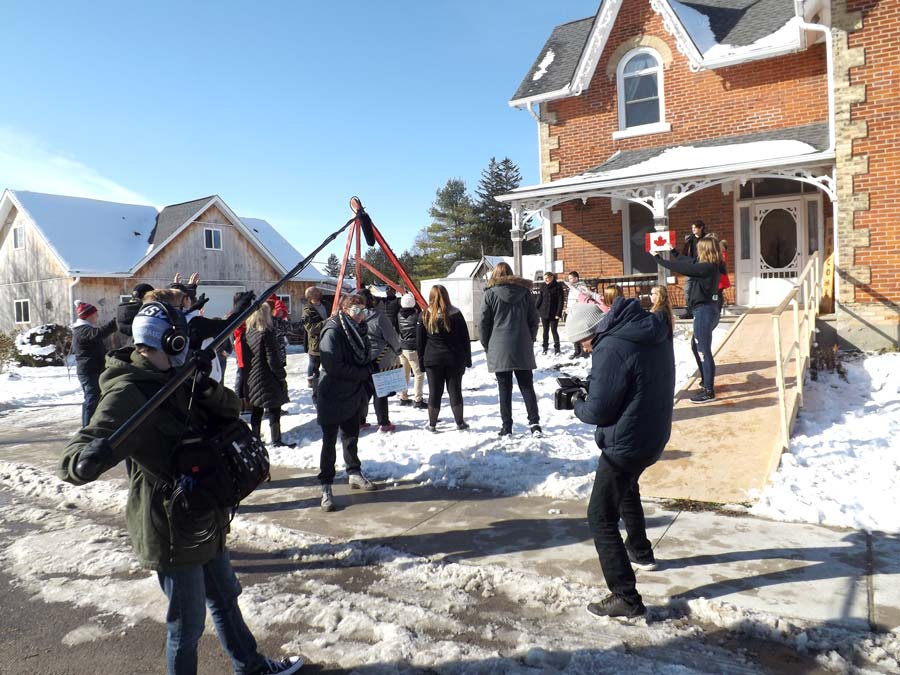 The town of Minto approved a number of permits and “several individuals graciously opened up their doors” to facilitate the production, notes Tailor.

“We’re filming here because the director has been with me on a couple of other projects here before and he loved Harriston when he was here and he actually wrote Harriston in when he was thinking of this film,” said Tailor in a Nov. 17 interview.

“The town has opened up the doors and the response from the community has been amazing with all of the extras and the supporting roles and all of the locations. It’s what I love about this small town and this community is that they’re so open and so willing to help out on things like this.”

Tailor credits Kamal as “the reason we are all here.

“He has worked tirelessly on the script, character direction and his vision to make this all come together,” said Tailor.

“Working with him has given me the ability to act at my best and discover things in the moment, and as a producing partner, he and his partner Mariah MacDonald have been dreams to work with.”

Kamal said he has been impressed with the calibre of the local recruits.

“They take direction really well and they’re not very shy … they’re awesome,” he stated. “It’s a beautiful town,” the director continued. “Chad also knows a lot of people, which helps us in the production and budget and the people are very nice and accommodating. So that’s a big thing for a movie production.”

For local residents involved, the experience has been unique.

“I think it’s fantastic. Each year I always tell my family I want to do something different and this is certainly it for this year, being able to be in front of the camera and actually take a  character and develop it,” said Harriston resident Dan Bieman, who portrays a priest in the film. 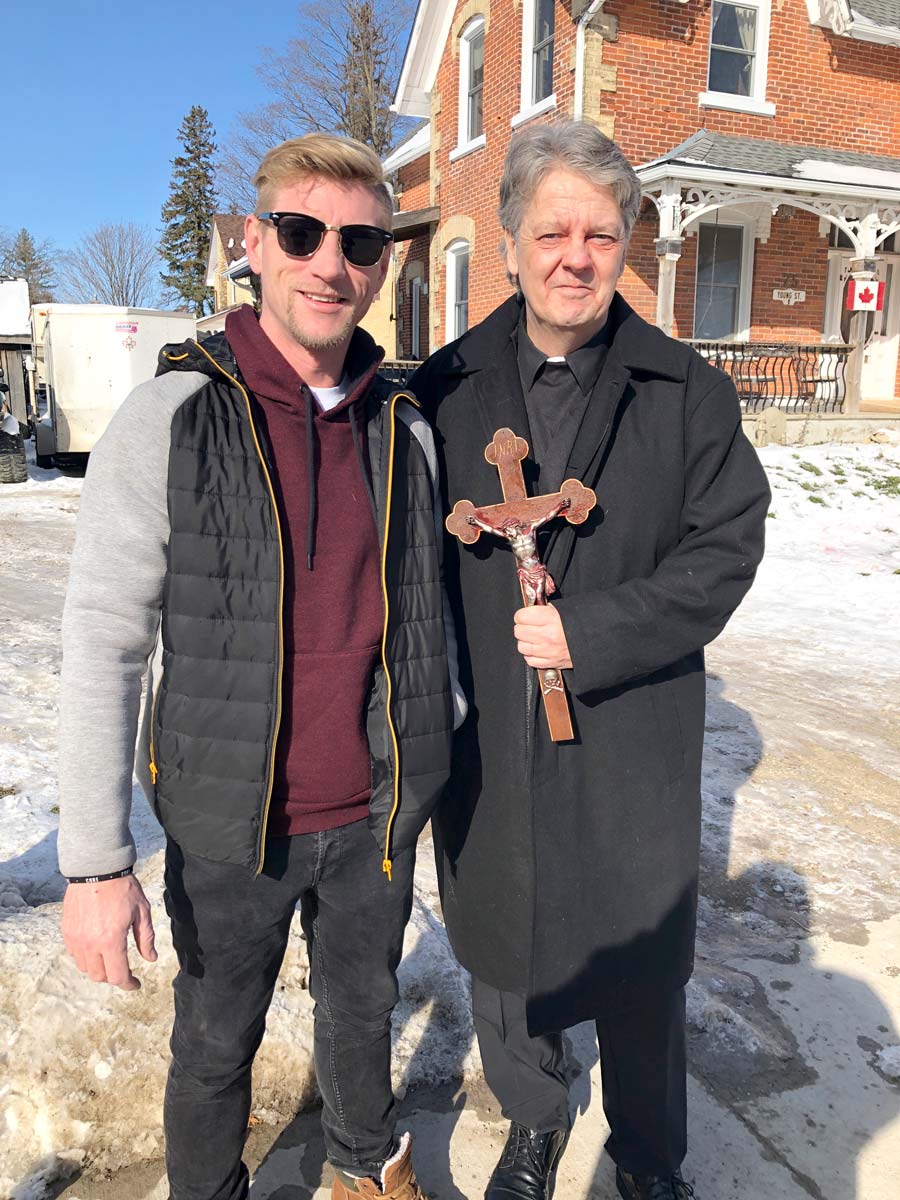 Bieman’s son Jake is currently studying film and television at Fanshawe College in London and appreciated the chance to be involved, both as an extra and a production assistant.

“Chad called me up. He knew I was in the program and that I was passionate about film and thought it would be a great experience to be on set and experience a real live film production,” said Jake, who noted he learned a great deal from the professionals involved.

“At school, we more or less use our own crews full of students and here it’s people working in the industry, so you really get a sense of all the work that we practice doing put into action, and how everyone is coming together as a community.”

“It’s been such an incredible experience,” said Flora Burke of Mount Forest, who also plays a supporting role.

The veteran of many GWTG stage productions, Burke said this was her first opportunity to be involved with a motion picture. 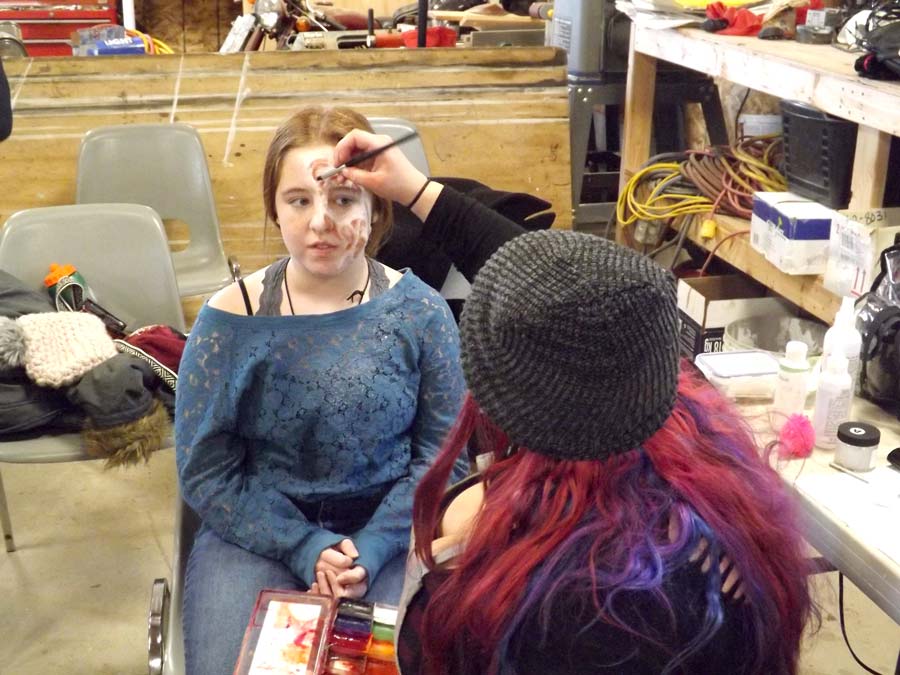 Acting is acting, but film offers one advantage over the stage, Burke notes.

“You get a chance to do over … the multiple takes are different,” she pointed out.

In addition to writing Godforsaken and directing the film, Kamal is also financing the independent production.

“This is a documentary-style horror film, and Ali wrote the lead very real and with me in mind,” said Tailor. “So basically I’m a filmmaker and I come back to my town for my high school friend’s funeral.”

After some disturbing events at the funeral, Tailor continues, “I go back to Toronto to get a couple of my filmmaker friends because we want to find out what happened, we want to make a documentary about this miracle, we want to know the facts.”

Tailor said the plan is to enter Godforsaken in the Toronto After Dark Film Festival and other horror genre film festivals, then look for further distribution.

“The big plan is always movie theatres. But in this day and age there’s always other stuff like Netflix, Hulu … we want to go as big as we can,” said Kamal.

While the film shoot covered 18 days, Tailor said the team has been working on organizational aspects of production since June and is planning to take the next six months to work on post-production.

“Editing, sound mixing, visual effects and colour correction takes time when collaborating with other creative specialists to produce the final cut,” he explained. 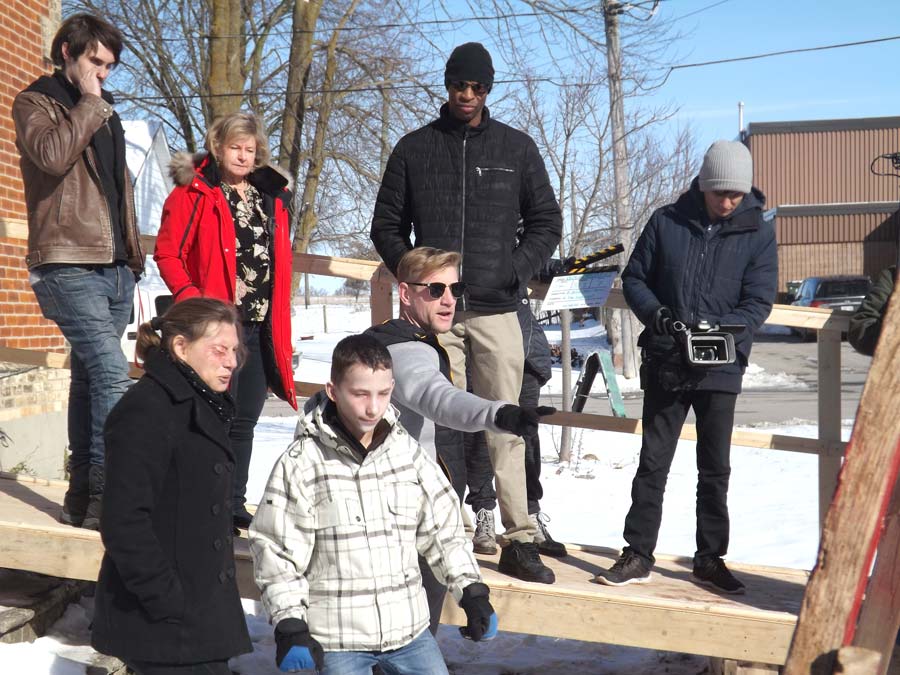 Local film shoot – Tailored Films and Makama Films were busy shooting scenes for a horror/thriller film in the Town of Minto between Nov. 7 and 26. Harriston native Chad Tailor (centre) stars in the production and Harriston resident Rassia Rogers, lower left, in special effects makeup, is ready for her role as an extra. Director Ali Akbar Akbar Kamal, right, gets set to film a scene.