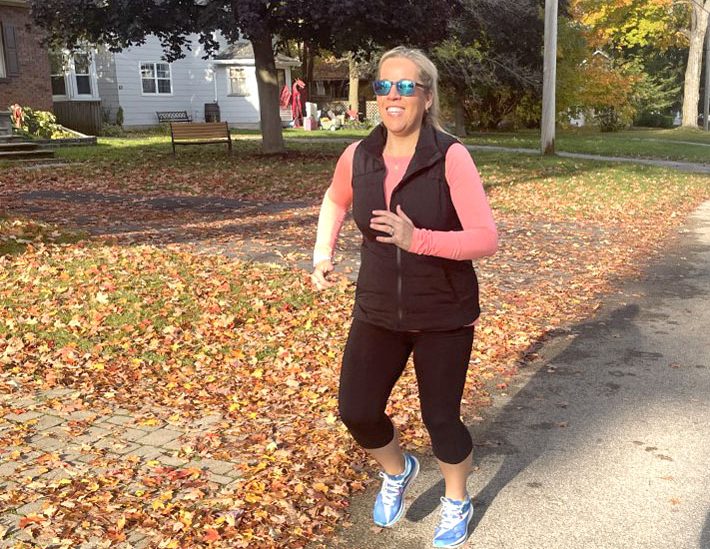 Harriston resident Amanda Bulmer will be running in the 2022 New York City Marathon on Nov. 6. Photo by Patrick Raftis

HARRISTON – When more than 50,000 runners hit the streets of New York City for the world’s largest marathon next month, a local woman will be among them.

Amanda Bulmer of Harriston learned in April that her application for the Nov. 6 marathon had been accepted.

Runners can gain entry to the marathon by several methods, including hitting minimum times at qualifying runs, participating in a set number of runs designated by the host New York Road Runners club, or signing up to raise funds for one of the marathon’s partner charities.

There’s also a random draw system, which is how Bulmer qualified. The draw route is a long shot though, with about 10,000 of this year’s 84,000 entrants awarded one of the coveted spots.

Bulmer took up running about three years ago.

“I wanted a healthier lifestyle so I decided to try running and fell in love with the sport and the community,” she told the Advertiser in an Oct. 14 interview.

“I started with a 5k, then a 10k and a half marathon and next is a full marathon,” said Bulmer.

Before getting into competitions, Bulmer said she spent a lot of time researching proper training and nutrition for runners.

“Once I knew how much I liked it and wanted to go further with it, I hired a running coach, which helps me. She kind of lays out everything,” Bulmer explained.

“Then, when I really started getting into it and signing up for races, the pandemic hit so everything was canceled. And then the last year was kind of when it really started opening up again and that’s when I did my first half-marathon.”

The New York City marathon is the world’s largest in terms of participation, although the pandemic also impacted it.

The event was cancelled in 2020 and operated at half-capacity for 2021. However organizers announced a return to full capacity of more than 50,000 for this year’s run.

Though the New York run is the largest, travelling through all five of the city’s boroughs, the Boston Marathon is perhaps better known and there are numerous other prestigious runs around the world.

Bulmer says the NYC run’s status as the largest led her to put it first on an ambitious list she would like to participate in.

“Once I started racing and after I completed my first half-marathon my dream was to complete a full marathon. Why not start with one of the biggest?” she said.

“I am so grateful and honoured that I am able to run the New York City Marathon.

“They say there is nothing like it. The crowds are supposed to be amazing. Around 55,000 runners from over 140 countries.”

She added it’s her dream to eventually compete in major marathons around the world.

Bulmer’s experience includes running the half-marathon portion of the Toronto Marathon last spring and two half-marathons including the Muskoka Marathon (her favourite), as well as various five and 10 kilometre runs.

This past summer she tried a triathlon for the first time.

“That was actually probably one of the hardest things I’ve ever done,” she recalls.

So how does she feel about extending to a full 26.2-mile (42km) marathon on such a large stage?

“Nervous. Excited? I’ve been training since June. So I’m getting the miles in … a lot of nerves, but I am excited,” she said.

To train for the big event, Bulmer is currently running about 40 miles a week.

“I run five days and then I have cross training as well. One day a week I have a long run,” of about 18 miles, she explained.

“My longest run will be next weekend, which will be 20 (miles). And that’s as far as I’ll go for the longest run and then you kind of start tapering down.”

Working shifts as a nurse, Bulmer finds herself doing “a lot of late nights and early mornings” for training. She also spends time at a gym.

“It’s such a big time commitment for training,” she notes.

While she feels physically ready for the run, she knows the mental aspect of it will be challenging.

“For me it will be more of a mental challenge when things get tough. I’ve done the training, I’ve logged the miles, I know my body can do it. I just have to believe that I can and believe  in myself,” she said.

“Often running long distance and endurance sports at some point you can hit what’s called ‘the wall’ where your body is hurting and exhausted. Being able to push through and overcome that will be my biggest challenge.

“I have a couple mantras I like to use and tell myself to help get me through: ‘stronger with every mile,’ and ‘You can do hard things.’”

While she has set a goal in terms of a completion time for the run, Bulmer is keeping it close to the vest.

“It’s between my coach and I. I just don’t want to put that pressure on,” she explains.

However, she adds, “Really my goal is to have fun, enjoy it, and just enjoy every mile … There’s tons of people, there’s supposed to be a big party (atmosphere) … And the crowds – they say the crowds carry you.”

Bulmer will be accompanied by her mother and her sister on the five-day trip to New York.

“We’re just going to enjoy the city, get the race stuff done. There’s a big Expo, there’s fireworks,” she notes, adding a visit to the 9-11 memorial is also part of her plans.

When not working, competing or training, Bulmer said she enjoys spending time with her family.

“I have a family who are extremely supportive of all my training and I’m always dragging them to races. We love to camp, bike and just be active.

“I’m so excited to be racing in New York; hopefully I can inspire others to never give up and chase your dreams.”