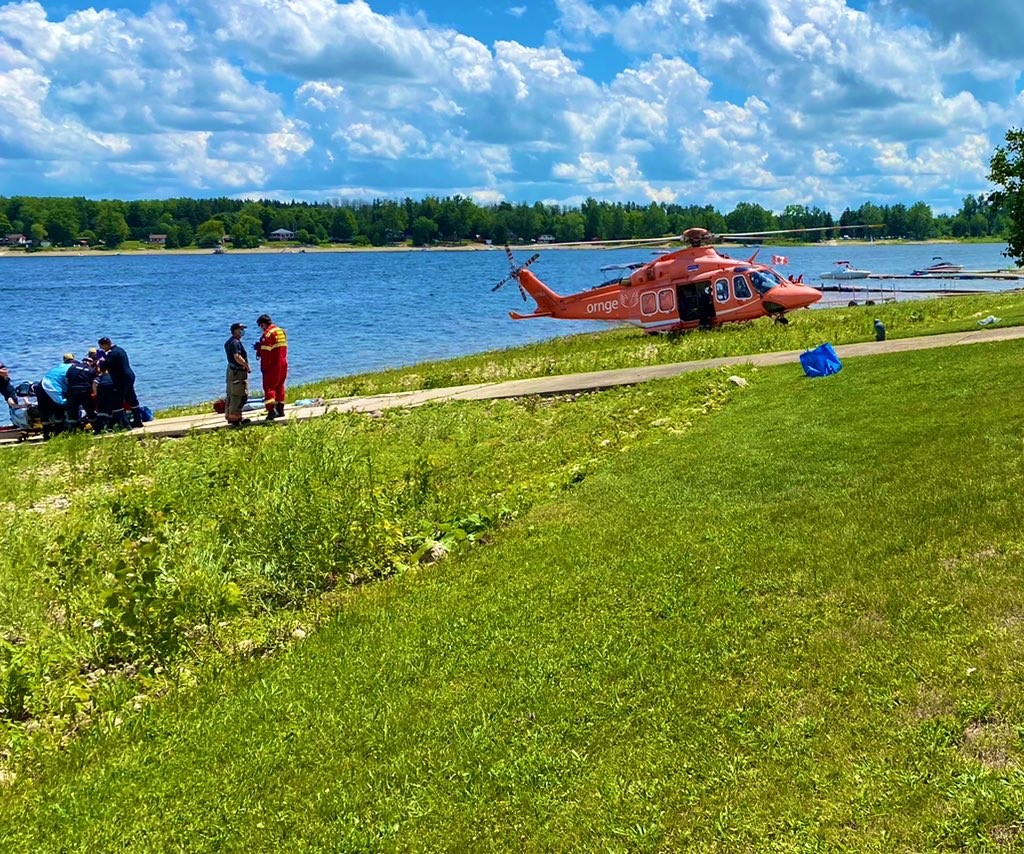 Emergency workers attend a water-related incident at Belwood Lake which claimed the life of a 46-year-old Guelph man on July 1. Submitted photo

UPDATE: July 5 – This story has been updated to include additional details provided by police, including the victim’s identity.

CENTRE WELLINGTON – A 46-year-old Guelph man was pronounced dead at Belwood Lake on Canada Day after efforts to revive him were unsuccessful following a report of a “boating incident.”

At 12:30pm on July 1, emergency services received a report of a person who went into the lake and didn’t resurface.

“When the first truck arrived, the individual had already been pulled from the water,” Karn said in a phone interview.

Nearby boaters, cottagers and the man’s family pulled his body from the water to a nearby dock where, by the time volunteer fire fighters arrived, a bystander was already performing CPR to keep the man’s body circulating with oxygenated blood.

Context surrounding the incident is limited but the scene was an emotional and chaotic one for bystanders and the man’s family members, Karn said, explaining the man entered the water and did not resurface immediately, as expected.

“We would definitely just touch base with them after that call and explain to them a lot of times, these outcomes are not positive, often they’re not successful, unfortunately, and that they did everything correctly and that they were a big help and gave that person the best chance for survival,” Karn said.

Guelph-Wellington Victim Services were requested to touch base with the man’s bereaved family, according to an email from Wellington OPP officer Joshua Cunningham.

The man was not associated with any of the surrounding cottages, according to Karn, and was at the lake from out-of-town with his family.

Paramedics, with the assistance of volunteer firefighters, continued to try and revive the man for 45 minutes before a doctor – contacted by phone – granted permission for resuscitation efforts to end.

A coroner later attended the scene and pronounced the man dead. The coroner will ultimately determine cause of death, helping to fill in details surrounding the incident.

“It’s another unfortunate and tragic incident in the water … we’re still early in the summer too, so we’re hoping for no more,” Mitchell said, referencing another recent water-related incident which claimed the life of a 33-year-old Mapleton man at Conestogo Lake last month.

“It’s almost like we’re getting back to a year where it seems like a lot of calls, but it’s maybe more of a normal year,” he said.

The previous weekend, on June 27, the fire and rescue service performed two water rescues, one at Belwood Lake and another at Elora Gorge.

“We weren’t out hardly at all last year for this type of thing because nobody was around,” Karn said, adding boating and tubing are both safe activities, so long as people take proper precautions and wear personal floatation devices.

In the event of a water-related emergency, Karn said having a way to call 911 and knowing where you are on a lake are vital to getting help.