GUELPH/ERAMOSA – During a time of virtual learning and stay-at-home orders, educational content is needed now more than ever for young children.

That is where the preschool series Gabby’s Farm comes in. The children’s series will premiere on TVOKids on May 17.

Gabby’s Farm follows six-year-old Gabby from Guelph/Eramosa as she shows her young audiences what it’s like to live on her family farm.

The series follows Gabby’s journey as she shows her viewers behind the scenes of farming and agriculture, including the animals, equipment and activities that Gabby encounters on her family farm.

The show not only explores all the aspects of her own farm, but it also takes her to other community farms. She introduces her audience to different farm animals, crops and her daily chores on the farm, from milking cows and riding tractors to exploring beehives.

According to Gabby, viewers can expect to see horses, cows, lambs, sheep, calves, chickens and many other farm animals as she explores different farms.

Her family will also play secondary characters in the episodes as Gabby learns with her older siblings.

Gabby explained the show will teach kids how to feed and groom animals, bathe dogs, shear sheep and many other fun farm activities.

“Kids will know about where their food comes from,” Gabby said. “Most kids probably wouldn’t know this, but the milk they drink comes from a dairy farm. We also have beef cows so [they] can be made into beef.”

According to show creator Daniel Bourré, the goal of the series is to showcase rural parts of Ontario, noting that shows depicting agricultural living and kids living on farms was missing before.

“As a show creator I’m always looking at what stories aren’t being told, what’s missing to be inclusive of different communities,” he explained.

“[Farming] plays such a big role into their everyday lives, the food that they get, from the crops that are being grown to the livestock and how that plays into them.” 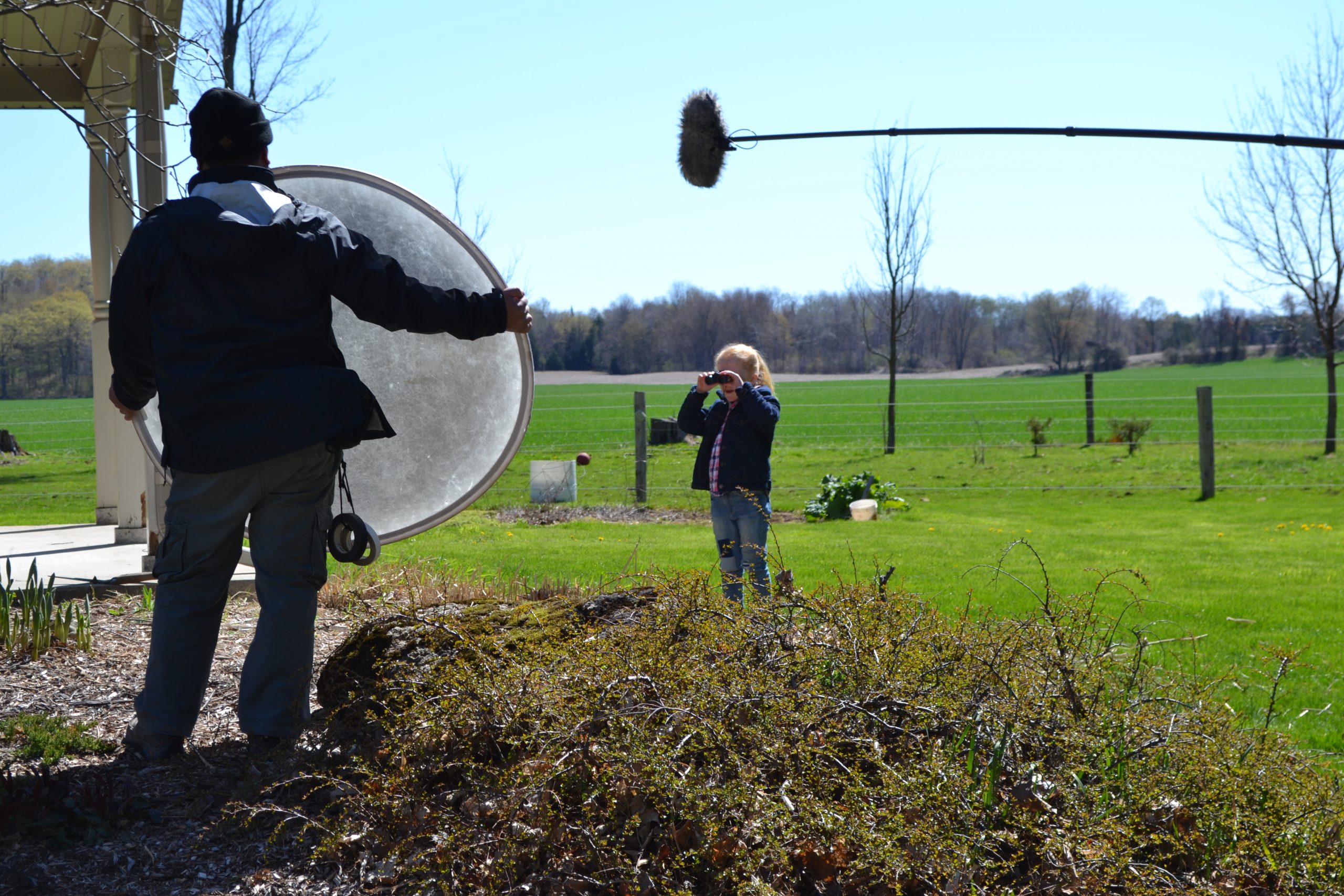 Behind the scenes of Gabby’s Farm, featuring Gabby holding up a pair of binoculars. Photo by Paige Peacock

Bourré added the show speaks to the important role farmers play in their communities, giving young viewers a better understanding of what farming is.

“It’s important to show a young girl at the front and centre, that’s not afraid to pick up chickens or get in there with the cows and groom them and be on these adventures and be playful,” he said.

“Viewers will get to have a look through her lens, through a six-year-old, what it means to be on a farm,” he added.

“She is unfiltered in a funny way. If the chickens give her a hard time you get the authentic reactions from her.”

Along with the adventure, the show also weaves learning material throughout.

The series will be accompanied by the short-form series Count with Gabby! which explores Gabby’s love of math and counting. Using items around the farm, Gabby teaches young children how to count.

“All of the play is mixed in and then at the end it’s the main takeaways that we want you to retain from it,” Bourré explained.

Each episode also has a segment called Gabby’s Farm Fun where Gabby cues the viewers to participate in a fun activity that might be related to the show’s theme that episode.

When asked about one of the most fun moments filming, Gabby said her favourite was when she filmed on a goat dairy farm where she completed a goat obstacle.

“We had two little goats, Cookies and Cream, and I had Cookies,” she said. “We had to make them jump up on two bales and make them swerve through the bales.”

Bourré hopes children will take away a better understanding of farm life and the amount of work that is involved with it.

“At any age there’s responsibilities that are good to have and with Gabby’s role modelling, not being afraid to try new things and explore and discover,” he explained.

(*Gabby’s last name was withheld at the request of her family.)