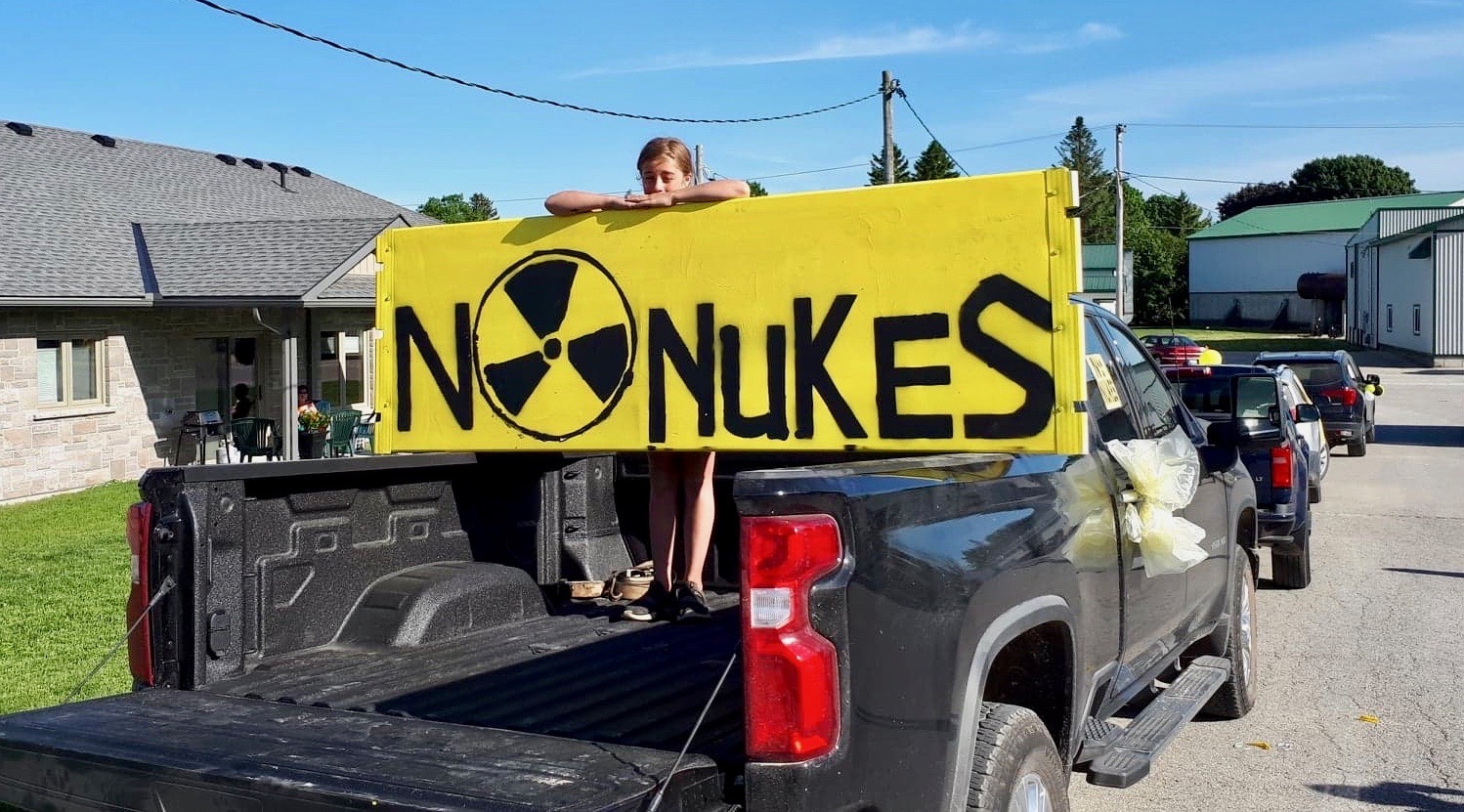 More than 100 vehicles took to the roads through Teeswater, Formosa and Mildmay on June 9 in a travelling protest against the proposed deep geological repository (DGR) for nuclear waste that could be located in South Bruce. Submitted photo

SOUTH BRUCE – A group attempting to prevent the location of an underground repository for high level nuclear waste in this municipality held a well-attended vehicle rally as members of the group petitioned their council to hold a referendum on the proposal.

More than 100 vehicles took to the roads through Teeswater, Formosa and Mildmay on June 9 in a travelling protest against the proposed deep geological repository (DGR) as local residents waved from their lawns, held up signs and banged pots and pans in support.

At the same time, a delegation was presenting petitions and letters to South Bruce council during its virtual meeting.

“It was an amazing turnout. Hopefully council will choose to start representing their constituents and realize a referendum is needed soon,” said Michelle Stein, a local farmer and spokesperson for Protect Our Waterways – No Nuclear Waste.

In a process that began nearly a decade ago, the Nuclear Waste Management Organization (NWMO) is looking for a site to store millions of bundles of used nuclear fuel.

The organization has optioned approximately 1,300 acres of land north of Teeswater as a potential site to bury the waste.

The decision on where to bury the high-level nuclear waste from reactors across Canada is down to the Municipality of South Bruce and Ignace, in Northern Ontario.

On its website, the NWMO states it is aiming to identify a single, preferred site “in an area with informed and willing hosts” by 2023.

Stein says members of Protect Our Waterway, formerly known as Nuclear Tanks No Thanks, believe it’s time to tell NWMO South Bruce is not a willing host for the project.

“If the Nuclear Waste Management Organization will only come to a willing community it is time to ask the community,” she told the Advertiser.

“No more wasting everyone’s time and money on their studies. We, the constituents, deserve a referendum soon.”

South Bruce council, however, feels there is no need to rush.

A press release issued by the municipality after the June 9 council meeting stressed no decision has been made.

“There are still a number of investigations and studies to be done before any decision is made and the municipality continues to explore the project and potential partnerships,” the release states.

“The municipality has also received correspondence from residents who are in favour of the process moving forward so council recognizes there is a range of views and we want to ensure people can continue to learn and make an informed decision.”

At the meeting, the community group presented council with a petition signed by more than 1,500 local residents.

Stein says an online petition gathered over 10,000 signatures from regional stakeholders in neighbouring municipalities and along waste transportation corridors concerned about the project and expressing opposition.

While she couldn’t say how much of the support came from the Wellington County area, Stein said the group “did see a definite increase” in traffic to its website (protectsouthbruce-nodgr.org) after running a series of advertisements in the Wellington Advertiser leading up the June 9 meeting.

“There are several reasons people outside of South Bruce should be concerned,” said Stein.

“The first would be the water. They keep talking about this stable, undisturbed rock, but after you have drilled, blasted, and bore out the rock it is no longer stable or undisturbed,” she explained.

“As a result there is a difference between the atmospheric pressure and the geological pressure, which means the groundwater will get into the repository and you can’t guarantee a man-made container filled with radioactive waste will last 10,000 years.”

In addition, Stein said, if the repository is built, it is anticipated that two transport trucks every day will bring loads of high-level waste to the facility.

“A lot of those trucks will be traveling through neighbouring communities to get here. Right now, Canada moves around five loads a year,” she pointed out.

The municipal press release states that South Bruce will be building a team of consultants to work with the municipality to explore the proposed project alongside the South Bruce Community Liaison Committee (SBCLC), which was established in 2013.

While council declined to commit to an immediate referendum, South Bruce Mayor Robert Buckle stressed community input will be considered.

“We appreciate the input from our residents and I want to remind everyone that safety is the top priority and it will continue to be at the forefront of all considerations,” said Buckle.

“We owe it to future generations to fully explore this project, including the benefits and the potential impacts, before a decision is made. I want to be able to look back, whether we host it or not, and know that we put forth an honest effort.”

Meanwhile, Stein says the community group will continue its efforts to inform the public and hopes to organize some outdoor events that will include expert speakers to help create awareness.

“Our group, Protect Our Waterways – No Nuclear Waste, is working to protect our water and lifestyle,” Stein said.

“We don’t want to trade it in for a mining community. We want to grow food, not store radioactive waste.

“We don’t want a nuclear waste repackaging plant just a few kilometers from our town that includes two elementary schools.”