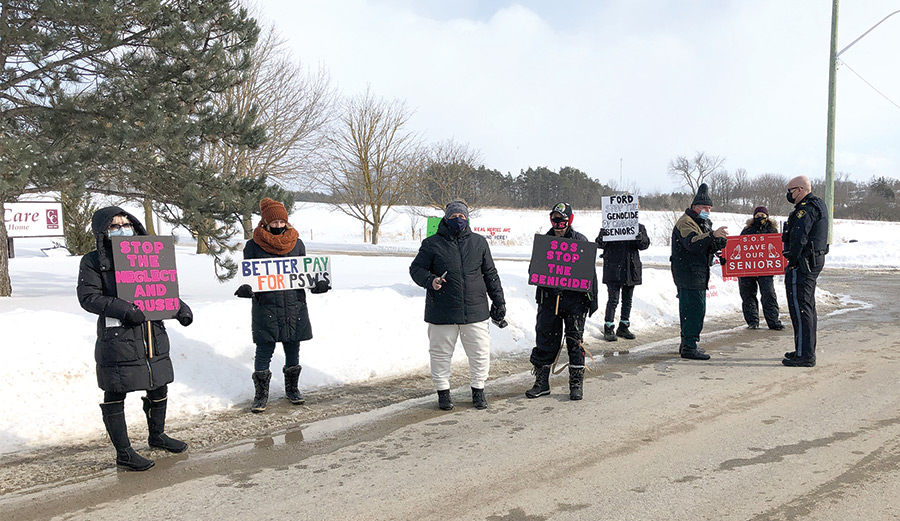 Protest - A Wellington OPP officer, right, chats with protestor Carl Braeker, third from right, during a protest in Arthur on Feb. 20 about conditions for long-term care residents. Photo by Patrick Raftis

ARTHUR – Members of a group representing families concerned about loved ones in long-term care set up a protest outside the Caressant Care Nursing and Retirement Home here on Saturday.

The Feb. 20 protest was organized by Warrior Advocacy Crusade – All Senior Lives Matter – Seniors Before Profit.

Spokesperson Sparky Johnson said the group has been holding protests at long-term care facilities, retirement homes and hospitals across the province.

“We’re going across Ontario to all the long-term care homes, the retirement homes, the hospitals … that have been cited with a multitude of violations on neglect and abuse that continue to be dismissed by our government, by our ministry of health and by the police departments,” said Johnson, of Newcastle.

She added other protestors on hand Saturday came from Toronto, Hamilton, Niagara Falls, Etobicoke and Newcastle.

Johnson said members of the group have all lost, or are concerned about, a loved one in long-term care, “because of the neglect and the abuse.”

Johnson said she became involved because her aunt passed away six weeks after entering a Port Hope long-term care in facility.

“She went in cognitively aware and alert and responsive with her only issue being mobility,” said Johnson.

She noted the group hopes to bring the issue to the attention of “those who are responsible.

“This isn’t just a provincial issue. This is a federal issue, where our federal government allocates funds out provincially and there’s no accountability,” she stated.

Johnson said the group advocates for “alternative care” including reallocating funds to families, rather than care corporations.

Carl Braeker, 91, of the Holstein area, said he’s been protesting conditions for seniors in long-term care since 2010 through petitions and online activism. He said governments of all political stripes have failed seniors.

“I’ve dealt with politicians. They know all about it. Things are getting worse and there is no action on the political part, either by the Liberals or the Conservatives,” he said.

Braeker said Saturday’s protest was the first he has attended in person because the group has never held one close enough to where he lived for him to attend.

Earlier in the day, the group protested outside Village of Riverside Glen in Guelph.