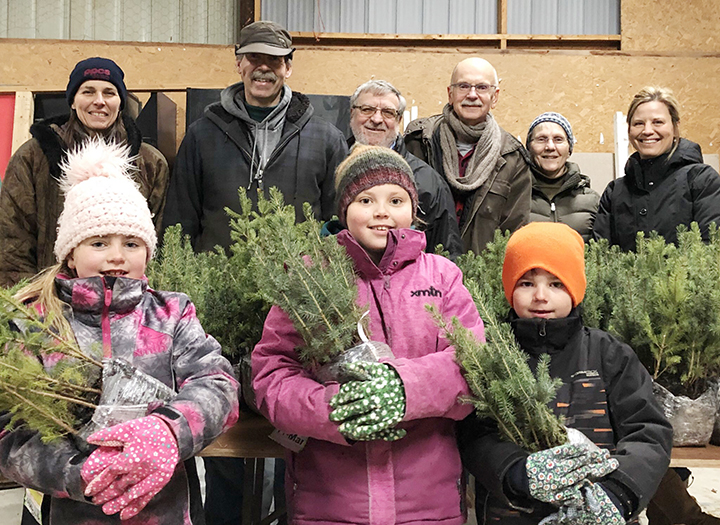 WELLINGTON COUNTY - By this spring the county's Green Legacy Program will have distributed and planted two and a half million trees since the program took root in 2004.
Advertiser file photo

WELLINGTON COUNTY – By this spring the county’s Green Legacy Program will have distributed and planted two and a half million trees since the program took root in 2004.

And it has no plans to slow down anytime soon.

The program annually plants and distributes 170,000 trees to community residents, paid for and supported by the County of Wellington.

While the ground is covered in snow, program officials are busy preparing another 170,000 trees for the spring in an underground storage facility in Puslinch.

“We call it the cooler, but actually it’s warmer this time of year. It stays about two to four degrees so we can work with our trees but keep them dormant,” program outreach coordinator Alison Morrison told the Advertiser.

Staff members are now grading seedlings for health and size, bundling and preparing them for spring distribution. The trees need to be ready to be given out for planting by the end of April.

“It’s a real kind of race to the finish,” she said.

The program has claimed the title of the largest municipal tree planting program in North America. Every year about 13,000 people from the community help grow and distribute the trees.

“I think one of the most important parts is the human piece. We try to engage as many people as possible in the growing process,” said Morrison.

Every student in the county, from junior kindergarten to Grade 8, is invited to participate in the program. Green Legacy pays for all the supplies, as well as busing for students.

Currently, the program  works with every school in the local Catholic and public school boards, in addition to a handful of local private schools.

“We try to make it … barrier-free to get environmental education and outdoor skills into the lives of students,” said Morrison.

“We’re hoping that at the same time as we’re raising and growing and distributing trees, we are kind of cultivating a mindset of … appreciation in the community.”

The two main goals of the project became educating and engaging the community and increasing the forest cover in the county.

“The County of Wellington currently has about 17% forest cover and the Ministry of Environment says we need closer to 35% if we want to keep adequate habitat so that other species can have a kicking chance and to buffer human impact,” said Morrison.

However, she explained it will be years before the county reaches more than 17%.

“It’s going to take a long time for trees to grow. So [the program is] only 15 years old. And if you think of a 15-year-old tree out in the community, it’s going to be 20 feet tall or something, where they’re not really contributing to canopy cover just yet,” said Morrison.

To reach that goal the program is barrier free and open to everyone.

“If you’re interested in having trees on your land and can’t find the time or the project is too big, we actually can work to provide the help,” said Morrison.

“A lot of farmers when they’re putting in hedgerows, these things can be a kilometre long. And so we’re looking at putting in 400 or 500 trees; we’ll do that with 100 Grade 7 and 8s in the course of a morning and kind of make it quick and easy.”