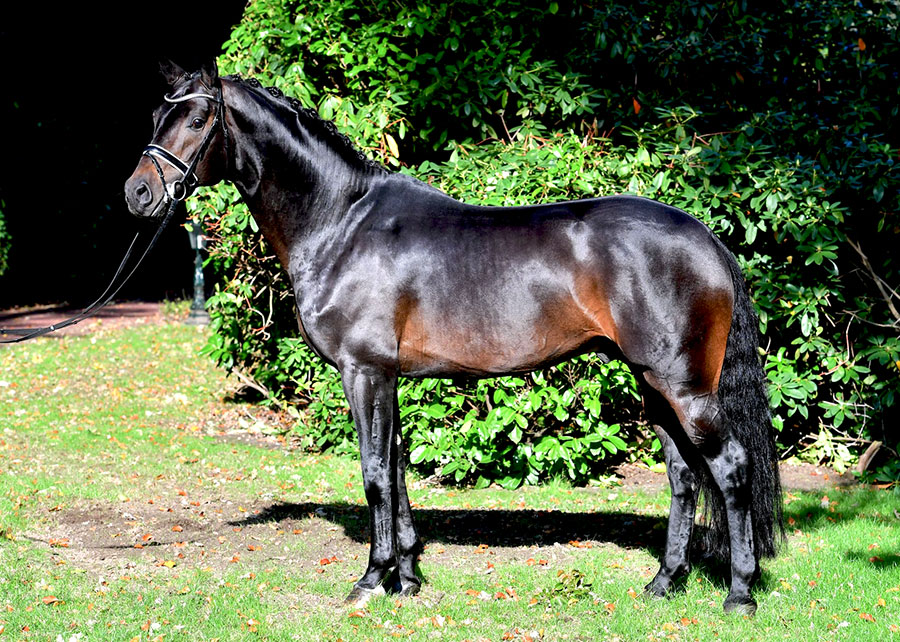 ‘Once-in-a-lifetime horse’ – Arriving soon from Germany, Feinrich is an Oldenburg stallion with a proud pedigree, set to stand at stud in his new home at Lookout Farm in Belwood. Owner David Burke said Feinrich will help improve the overall quality of the performance sport horse in North America. Burke has put his trust in trainer, breeder and rider Janet Konyer, of Lookout Farm, to get Feinrich ready for the Grand Prix. Submitted photo

CENTRE WELLINGTON – It’s been a long journey, but the renowned German-born stallion Feinrich will soon arrive at his future home: Lookout Farm near Belwood.

Here, he will stand at stud, while progressing his education in dressage competition under the care and skilled instruction of trainer, breeder and Grand Prix competitor Janet Konyer.

Bringing this stallion to Ontario is David Burke, owner of Pangaea Farms, a Hanoverian and Oldenburg breeding operation in New Brunswick.

Burke believes this move will be best not only for Feinrich’s performance career under Konyer’s guidance, but also for improving the overall quality of the performance sport horse in North America by having him bred from a central location.

“Feinrich is an extremely well bred, sought after young stallion that has an incredibly phenomenal pedigree, and I think he will vastly do a lot for North America. He is likely one of the highest quality young stallions in Germany in the last number of years,” Burke said.

Feinrich is a dark bay Oldenburg stallion born in 2013, sired by Furst Heinrich, to dam Gesina. Both lineages offer high calibre ancestry, from the paternal line to that of Gesina, considered “the most important mare in modern Oldenburg breeding history” by industry breeders. 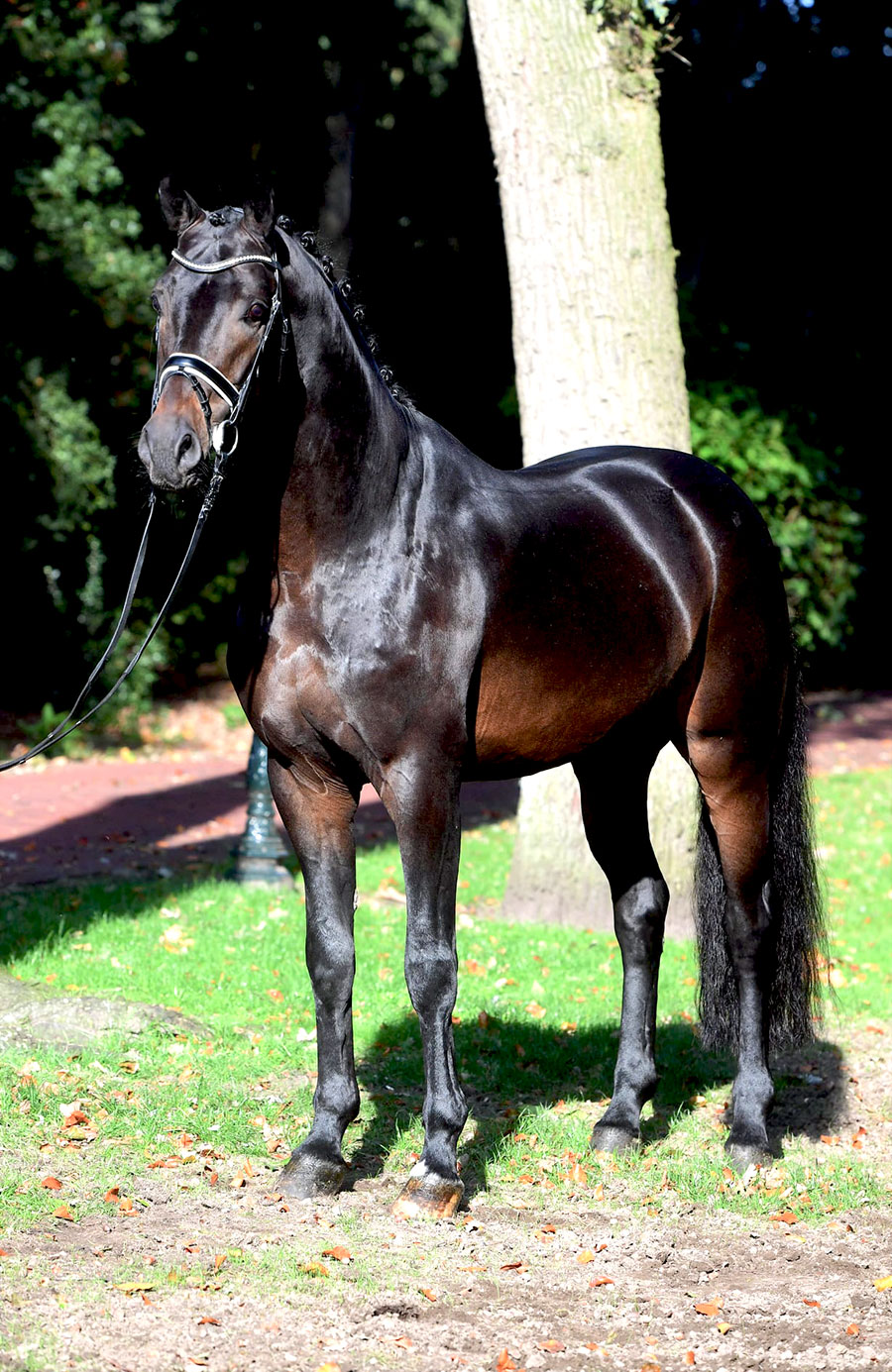 Future goals – While his first priority is a breeding stallion, Feinrich is also destined to train and compete in the ring, and both David Burke and Janet Konyer have high hopes for his dressage career.
Submitted photo

While some have questioned Burke’s decision to bring this world-class stallion to Konyer’s Lookout Farm, it was a clear-cut decision for him, based on a proven track record of Konyer’s professional expertise.

“I have worked with other trainers over the years, and I didn’t get the results that I anticipated from the last trainer, so I sent that horse to Janet to see what we could get done, and very quickly, it was a match that worked really well,” Burke said, adding he had three horses in training with Konyer in the last year and she has bred to his stallions in previous years.

His confidence in her abilities was earned through honesty and trust.

“So we work really well together because we’re very straightforward with each other. And to me, that’s the pinnacle. We can say it exactly as it is and that’s why we work so well together. Because … we have very, very strong ethics and morals.” 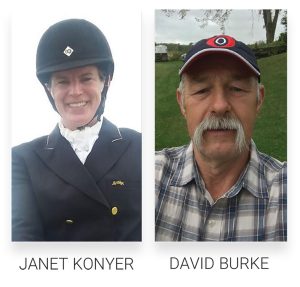 Burke is also confident in the team that surrounds Konyer, as is she. That team includes Konyer’s coach Nancy MacLachlan and veterinarians Dr. Alan Young and Dr. Claire Plante.

“I have a very good team,” Konyer said. “I’m confident our team of expertise can figure out what is best for this stallion and how to best manage.”

“I think Janet is very talented and she has the right people working with her,” Burke said. “So, I think the horse will be in extremely capable hands, and I have no issues with that whatsoever.”

The significance of working with a horse of Feinrich’s pedigree is not lost on Konyer.

“This is a once-in-a-lifetime horse of this calibre and this potential. I may never have the opportunity to sit on another horse like this,” she said.

“I’m proud to get this opportunity, and it goes to show that hard work, integrity and honesty does pay off.”

In 2015, Feinrich won his licensing and completed his stallion performance test. Three years later he was winning dressage competitions in his age category and qualified for the German championships.

He has achieved top placements in intermediate dressage competitions and Burke believes it’s just the beginning of a strong career.

Feinrich is the seventh stallion Burke has purchased from Europe, all with the same goal.

“This gives North American people the ability to buy super quality horses right here, rather than having to go over to Europe to get them because we can breed as good a quality here by having stallions like this to breed to.”

Burke believes the initial costly investment to bring Feinrich to Wellington County is a worthwhile investment.

“The pedigree matches the quality of offspring he’s already produced, it’s phenomenal. And he’s a very talented individual,” Burke said, noting the significance of the Oldenburg mare lineage bred to this stallion.

“He’s so highly rated so he will be sought after.”

Feinrich’s offspring are noted to resemble their sire, with “wonderful type and big paces.” He has produced licensed stallions with early wins in competition.

Burke sets temperament as the trademark of a great stallion, and Feinrich exceeds his standards, he explained.

“So, I would only be interested in sourcing a stallion that has those criteria.”

Burke noted the European market has more professional riders who are equipped to handle difficult horses.

“But we have here a vast majority of amateurs, so we need stallions and their offspring that have that character and temperament and rideability factors to carry through.”

“I think it’s smart and not all breeders put that same kind of emphasis on it,” she said. “For me, not only as a breeder, but a trainer of these horses that I raise and train and develop for competition, temperament is everything.”

Feinrich will stand at stud at Lookout Farm, a 93-acre family-run farm, which officials say is an ideal location geographically for breeders across Canada and the United States.

“We have the greatest density of horses here to breed, so it makes it much more accessible for breeders,” Konyer said, explaining access to fresh semen that can be quickly transported or couriered to breeding farms makes the process less labour intensive on the veterinarian and less stressful for the breeding schedule.

“We’ll be standing him at our farm and collecting him there. We’re very lucky to have the opportunity to work with one of our best reproductive vets, Dr. Claire Plante. She will be handling the veterinarian end.”

While his first priority is a breeding stallion, Feinrich is also destined to train and compete and both Burke and Konyer have high hopes for his dressage career.

“While this horse is already a proven advanced horse, he has not yet reached the highest level, which is Grand Prix,” Konyer said.

She is an FEI (Federation Equestre Internationale) level rider who has bred, trained and ridden her own horses up to and including the Grand Prix level.

“That would be my goal, to finish his education and be able to show him in the future at Grand Prix.”

Burke admits initially he wasn’t looking at a stallion to compete, but Feinrich is a different stallion.

“This horse looks like he needs to be back in the ring, to be a competition horse. And I think if his character and temperament follow through then he can do both the breeding and the showing aspect as well,” Burke said.

“And I think it will be vastly important for people to actually see a stallion of his quality and temperament out there competing.”

But first, Konyer has to introduce Feinrich to a new lifestyle in a new home and build a relationship with the horse. That will take time.

“I think we just have to approach this systematically and sensibly and give him an opportunity to acclimate to a completely different environment and hopefully he will climatize; stallions do, but for some it’s very difficult,” Konyer said

Getting to know this stallion’s unique personality and balancing his instincts for breeding with the required focus for training is a challenge Konyer is keen to champion.

“It’s too hard, you’re asking too much of the horse if you’re going to force this.

“They have to want to work with you. And I think that’s why I want to proceed carefully with a horse of this calibre and potential that we get to know each other and work together.”

Burke is confident his stallion, under Konyer’s guidance, will achieve success, but as a horseman, he is also aware that every horse is unique, and that a Grand Prix horse is only official after it has completed a full test, finished the centreline and walked out of the gate.

“You never know what a horse will do until you get him in the ring,” he said.

“Obviously, we know he can compete and do very well in Germany, but I mean, it’s a whole different scenario over here. So, yes, that is the goal for Janet to be able to go down the centreline and finish.”

The work begins this May, when Feinrich completes his quarantine and can make the trip to Lookout Farm. This stallion has a good home waiting for him.

For Burke, it is the beginning of a breeding legacy.

For Konyer, this is the horse of a lifetime, a career high, and she is ready for it.