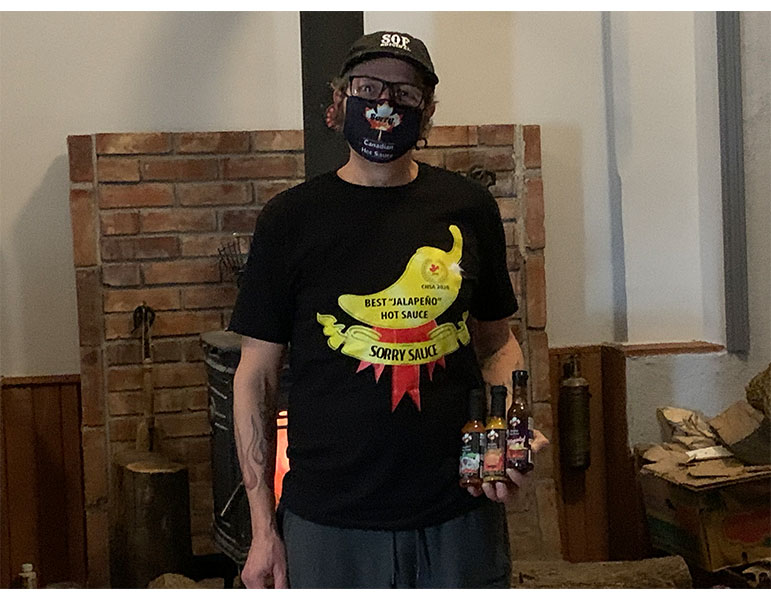 MAPLETON – For Erik Begg and his wife Nina, what began as a backyard hobby has now blossomed into an award-winning business.

Begg said he “accidentally” created his hot sauce company, Sorry Sauce, in 2014 while living in Burlington.

But Begg grew up far away from a world of gardening and making hot sauce.

“I spent most of my life playing in bands,” Begg said.

“I played guitar and drums in various punk-rock bands, dating back to the late 1980s. I lived downtown in cities like Toronto, Vancouver, and Hamilton, and stayed near the venues, living the musician life.”

In his early 30s he married his wife, Nina, who runs the business with him. Instantly, his former life as a punk-rocker came to an end.

“Now I’ve got four step kids. We’re like a Brady Bunch, because I brought in nine guitars and a cat. Nina had four kids, and we sort of melded the families together. We’re now up to eight cats, because all four kids have moved out.”

For Begg, the switch to a slower-paced lifestyle is what opened his eyes to the idea of gardening, which would eventually inspire him to make hot sauces.

“We ended up in the suburbs, and for the first time in my life I had a backyard. Coming from the punk-rock life, I thought if I started gardening, it’s a relaxing hobby that delivers free food. So, it’s a win all-around.”

Begg said shortly after he began gardening in his back yard in Burlington, a family of racoons destroyed much of what he had planted.

What remained of his garden was a single ghost pepper plant.

“I had always liked spicy things, so I figured I’d grow the ghost pepper and see if I could eat it,” he explained.

“It turns out I couldn’t. So, I had some fun and made a little hot sauce out of it.”

Begg said the next year, his garden expanded to include four different types of hot peppers.

“At the end of the season, I still couldn’t eat the peppers on their own, so I made another hot sauce.”

Begg then decided to bring a bottle of his Mango Reaper hot sauce into work one day to pass around to his co-workers.

The sauce was so popular that within two days he had passed out 23 bottles. Begg said the excitement of having people like the hot sauce inspired him to continue to create new sauces. 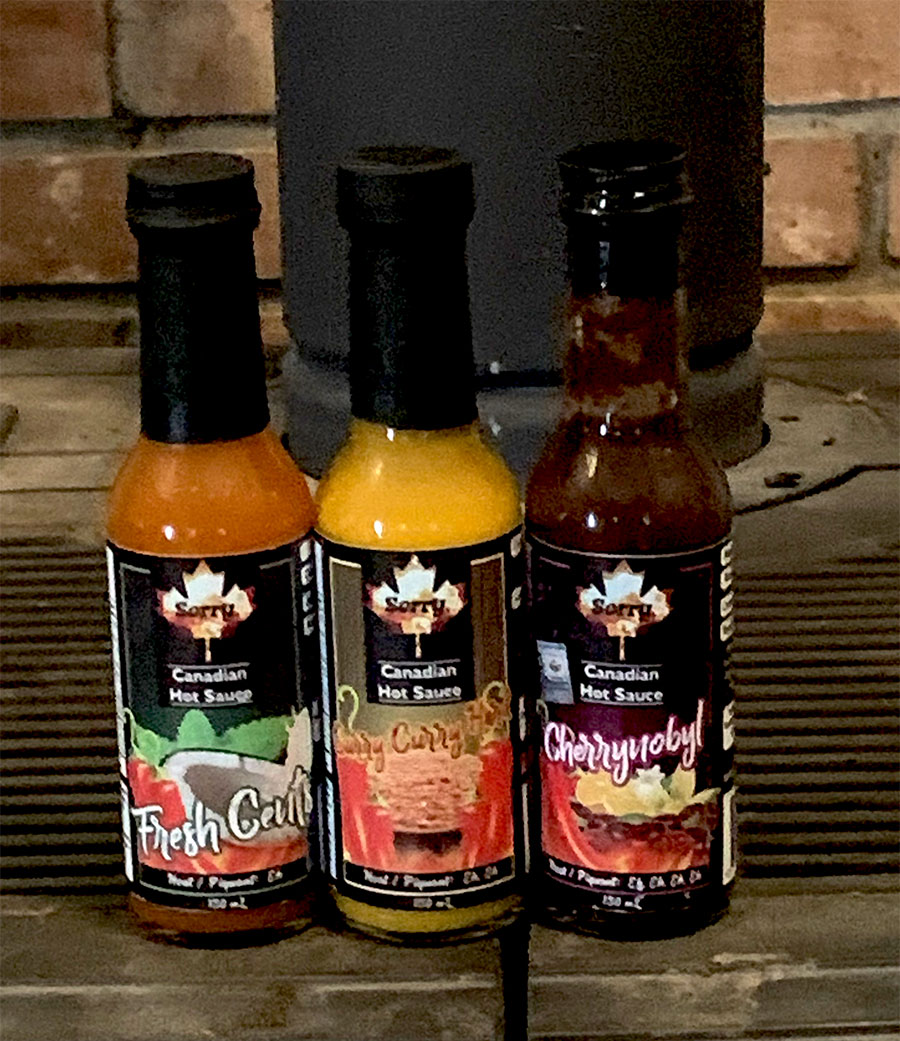 “I played around with a few recipes with the remaining peppers I had that year, and over the next couple of years I started ordering pepper seeds in from various suppliers around the world and trying different types,” Begg said.

“The peppers have as much variation within them as apples or berries do. Each pepper has its own nuance, that pairs with certain ingredients. Part of the fun was trying a whole bunch of recipes and a whole bunch of different peppers, until I settled on a few I liked.”

Begg said he has a few core recipes, but for him part of the fun is coming up with new recipes and growing new things every year.

“I find it a lot more creatively rewarding to make the strange sauces that people don’t make,” he said.

Eventually, Begg decided he needed more space to grow ingredients for his hot sauces. He and his wife settled in Mapleton in late 2017, where they now have almost half an acre of land for their plants.

“Initially the plan was that we’d live out in the suburbs until the kids were off to college, and then we’d move back downtown and get back into the music scene,” Begg said.

“But I had accidentally created this company and created some demand for these hot sauces.”

Begg certainly has not lost the  creative instincts formed during his previous life as a musician. Begg displays this not only with his hot sauces, but also through the colourful names he has chosen for his hot sauces and his business.

“I just called it Sorry Sauce, because I figured I was a nice Canadian and it would be a funny name for it,” he said.

Keeping with the same theme, Begg has also chosen a name for his garden at his home in Mapleton, where he grows some of the ingredients for his sauces: the garden of apologies.

“It’s a nice synergy with the name Sorry Sauce. Part of being in bands for most of my life is that you’re always coming up with names, new angles, and new song titles. So, it’s a bit of the same creative outlet,” he said.

Begg said he tries to grow as many ingredients for the hot sauces as he possibly can, or buy them locally.

“I can’t get limes or mangos locally, but the majority of other ingredients, like carrots, onions, maple syrup, garlic, as much as I can I try and source them from the farms around us or from the other vendors at the local farmer’s markets,” Begg said.

“That gives me three wins. I keep the money in the local community, so I’m paying my neighbours. I also get stuff that’s fresh out of the ground, and you can taste the quality. And with no shipping, it also keeps the carbon footprint down.”

Begg said he primarily sells his hot sauces at farmer’s markets within the county, including Rockwood and Mapleton. He is now up to 13 retailers in the area as well. This season, he will have a permanent spot inside at the Guelph Farmer’s Market.

“Wellington has been terrifically supportive. When we first moved up here, this was still a hobby and I wasn’t sure how to run a business,” he said.

Last year, his “Cherrynobyl” won the award for best Extreme Sauce at the Heat Wave Expo in London.

“That was really exciting,” Begg said.