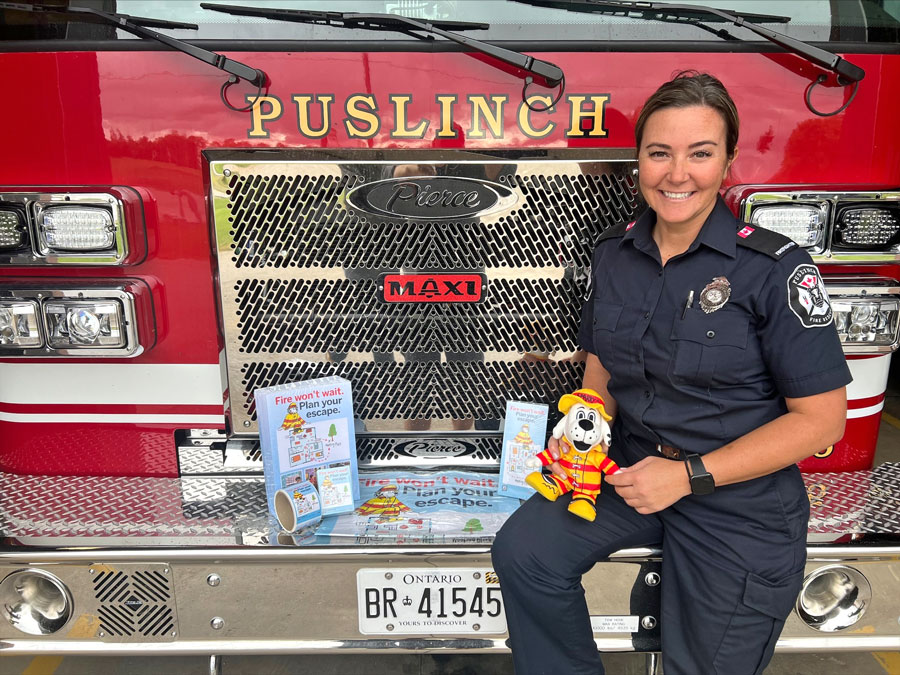 WELLINGTON COUNTY – It’s a message that bears repeating, and sadly never gets old, because it’s a scenario that can devastate a family and a community: “Fire Won’t Wait. Plan Your Escape.”

That is the message behind the National Fire Protection Association’s (NFPA) Fire Prevention Week, Oct. 9 to 15.

The Ontario Fire Marshall (OFM) is aligning with that theme through fire departments across the province by issuing a challenge to us all to “Plan a record-breaking escape.”

“The one we want to target is escape planning because it’s that piece of the pie,” said Jason Benn, deputy fire chief with Centre Wellington Fire and Rescue (CWFR).

“Everybody’s been conditioned to smoke alarms and CO alarms and the maintenance on that, but we want people to have that escape route as well.”

Benn added, “Some people think it’s one of those impractical things to do, because they don’t think it’ll happen to them. And when it does, then they’re unprepared and sometimes get in a tough situation.

“So, if we’re prepared, and we know what to do and when to do it, the end results should be beneficial for all.”

As part of Fire Prevention Week, CWFR members will be promoting fire safety and answering questions or concerns about fire safety products at Dixon’s Home Hardware in Fergus on Oct. 14 from 11am to 2pm.

CWFR, like some other fire departments in Wellington County, will also be making visits to area schools or community events to help educate youth on the importance of fire escapes at home.

The goal is not only to educate children, but also to get the message home to their parents and guardians.

“We want to encourage that they know what a smoke alarm is and what a CO alarm is, what it sounds like and then what action should be taken when they hear the sounds.”

Buczynski and members of Puslinch Fire attended an open house at Aberfoyle Public School on Sept. 29 to talk to students and parents. 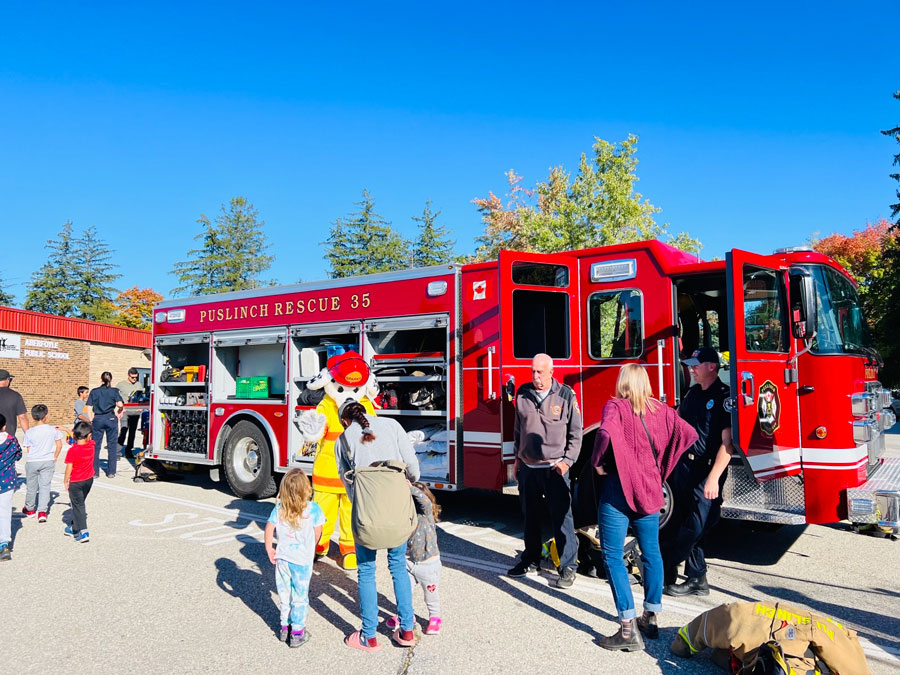 “One of the things we really would love for the kids to do is help keep the family accountable. So, giving them homework to take home with them to ensure they’ve got working smoke alarms and CO alarms in the house,” Buczynski said.

“Home escape plans are something we are teaching kids at a young age; having two ways out, making sure that they have a meeting place, that’s all part of the home escape plan.”

– make sure your home escape plan meets the needs of all your family members, including those with sensory or physical disabilities;

– know at least two ways out of every room, if possible. Make sure all doors and windows open easily;

– have an outside meeting place a safe distance from your home where everyone should meet;

– practice your home fire drill at least twice a year with everyone in the household, including guests; and

– practice at least once during the day and at night. 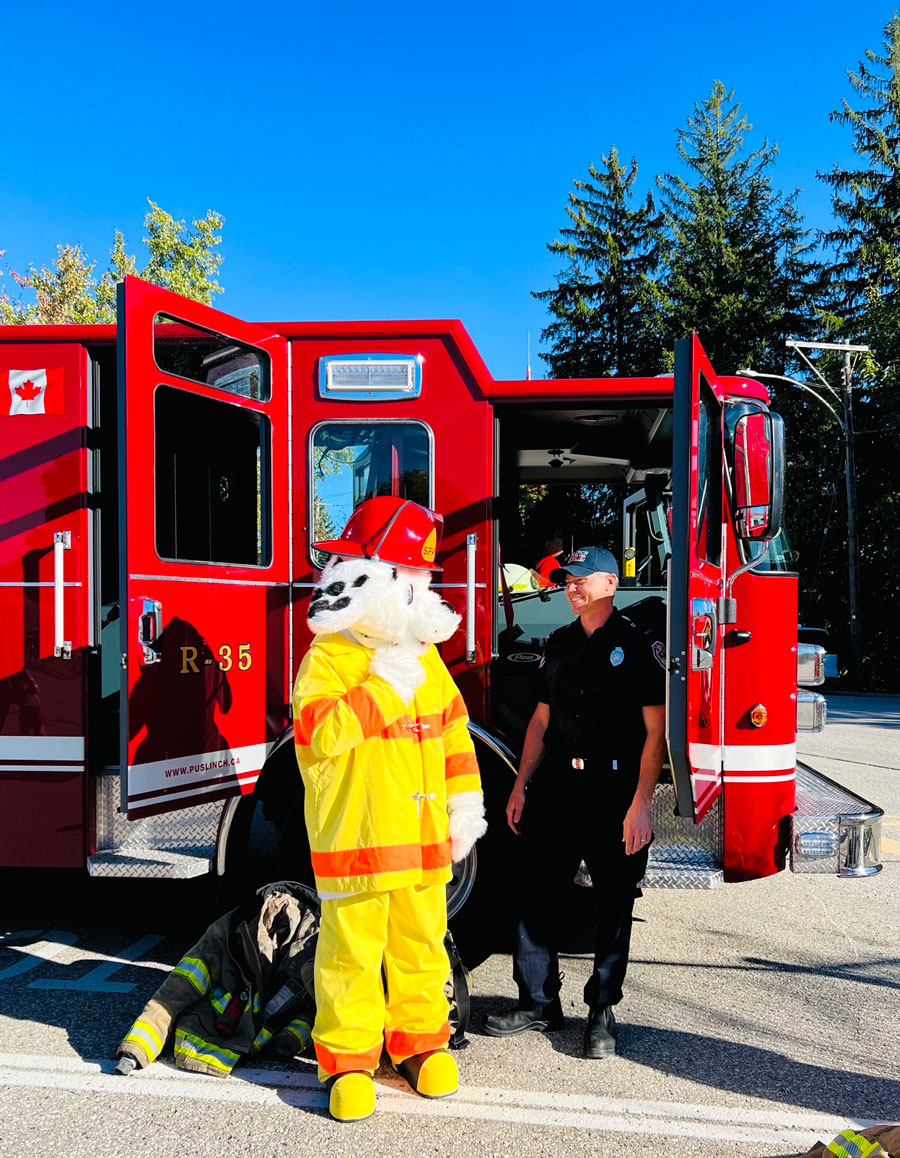 The Erin Fire Department brings its fire safety message direct to the community during the annual Erin Fall Fair (this year Oct. 6 to 10), bringing hands-on activities and fire prevention information to share.

“We’ll have trucks on site as well as doing a great big fire prevention blitz there during the other activities,” said Erin Fire Chief Jim Sawkins, noting his fire crews are on hand for medical standby throughout the Erin fair weekend.

Supporting the OFM messaging, Sawkins adds, “I’d also like to stress, on a personal note, the importance of a working smoke alarm. And I know people hear it a million times, but we had a fire this year and the smoke alarm saved a life.”

An early warning system is vital. Fire Prevention Week and the OFM theme highlights the urgency of speed required when it comes to a home fire escape plan, particularly in new homes.

“A concern with newer houses is that of light weight construction and the use of synthetic materials, such as glues, and that houses burn at a much quicker rate than traditional or older homes,” stated Mat Williamson, fire prevention officer in Guelph/Eramosa, noting a house fire doubles in size every minute.

“This is why we place so much emphasis on educating the public on having working smoke and carbon monoxide alarms: to provide that necessary early warning.”

Williamson said families need a fire escape plan that they practice together.

“We hear of fatal fires in area communities and the first almost assumption by a fire official is that there were likely no working smoke alarms, and how easily such a tragedy could have been prevented,” Williamson said.

To help make people comfortable with basic fire safety measures, the Guelph/Eramosa department will be hosting a portable extinguisher hands-on training event for the community on Oct. 13 from 7 to 8pm at the Rockwood Fire Station. 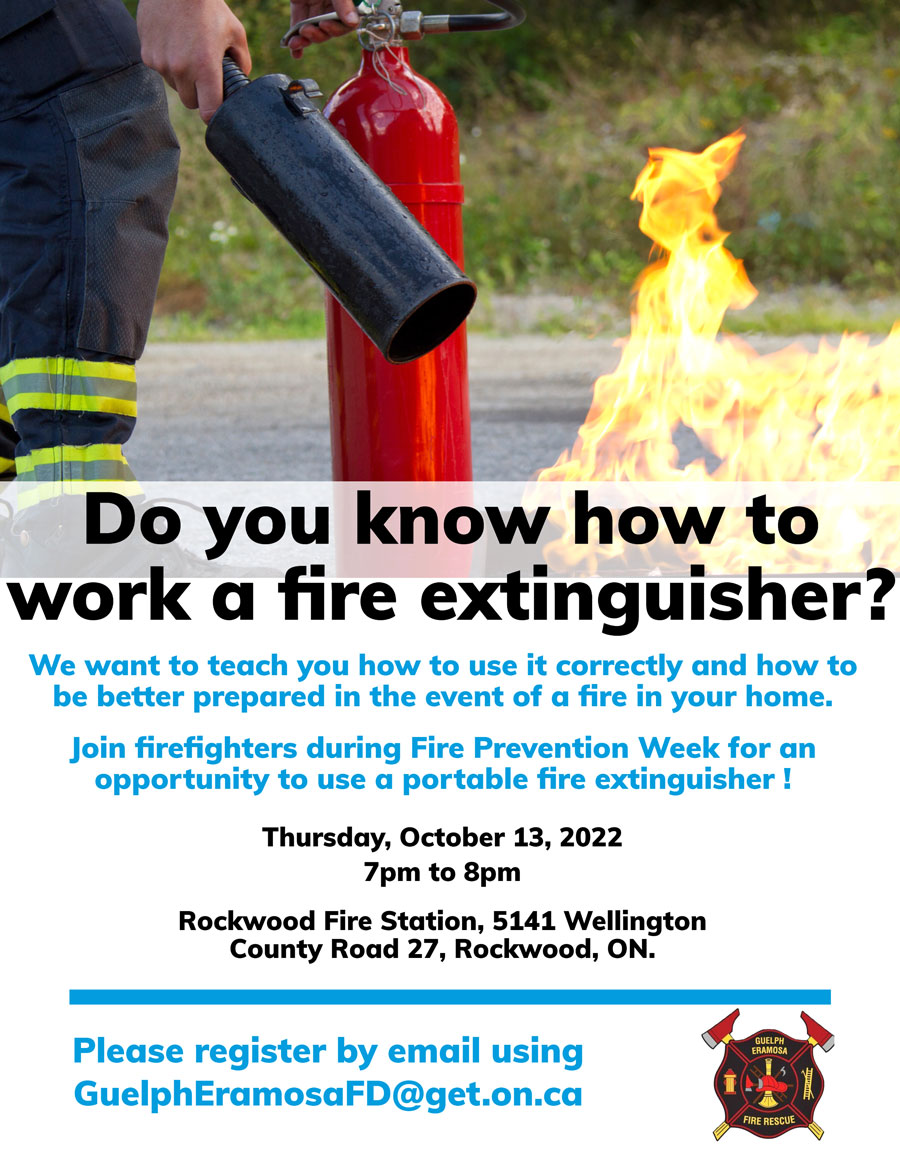 “Our extinguisher training night is being done in hopes of opening our door to the community and in helping people become more comfortable in using an extinguisher, should they experience a fire in their home or workplace,” Williamson said.

Creating safe, virtual fire safety experiences, the Mapleton Fire Department will bring their interactive Fire Safety House to their community Fire Prevention Day, which includes the annual Firefighter’s Pancake Breakfast on Oct. 15, from 8am to 11am at the PMD arena.

Mapleton Fire Chief Rick Richardson says the annual breakfast event is important, one that was missed during pandemic closures.

“We’ve always had a Fire Prevention Day with about 500 to 600 people coming for a pancake breakfast and we had the fire safety house there and some drills for the kids to do, like spraying the water, things that and it was a good time. People really enjoyed it,” Richardson said, adding he is looking forward to this year’s event, not only to see the community come together, but to help spread awareness of the theme of quick home fire escapes.

“And I think that kind of activity catches the message with the kids, because when we go to visit schools, the kids remember the details of what to do, knowing their way out of the house to get outside, how to have a meeting place outside. All that information we’ve given them is coming back to them, so I think it’s effective.”

They continue to educate the public at community events, including the upcoming Halloween Haunt in Harriston on Oct. 28, plus parades and other community gatherings.

Harrow said it is important for people to understand that time is critical in a house fire situation. He reminds homeowners about fast-burning homes, and the difference between a legacy home versus a modern home.

“A modern home room will flash over or become totally involved with fire in about four to five minutes. Whereas the legacy rooms, so the rooms like our grandparents used to have with natural furniture and all that natural wood products, took about 20 minutes for it to become fully involved in fire,” Harrow said, recalling a training video that showed those situations in real-time. “That video has always stuck with me that the modern homes and how open concept they are, they get so involved with fire and smoke so fast, like four to five minutes, that you have to have that warning of those smoke alarms to warn you early to get out, because you really don’t have that much time.”

Harrow notes that getting a fire evacuation message out to school aged children is done with the practice of fire drills at school, but he believes we need that same effort in our homes.

“We practice at the schools all the time, but if people don’t practice at home…,” Harrow said. “If there’s a fire in your living room, again with the open concept and you can’t get to your front door, have you had that discussion with a family about well, what are other options?”

Harrow adds, “People need to take it upon themselves to make sure that their warning systems and their smoke alarms and their carbon monoxide alarms are working properly.”

Seconds count. The challenge to “Plan a Record-Breaking Escape” has been issued.

For details on how to create your home escape plan, contact your local fire department or visit nfpa.org for more information, activities, and games to learn more about fire safety.