PUERTO RICO – It sounds like a dream – to be forced to stay at a sunny marina in Puerto Rico. But for Adam Sobol, the dream has been eclipsed by COVID-19.

Sobol, who lives in Fergus, left Miami in mid-February to crew a sailing vessel destined for Puerto Rico, intending to return at the end of March.

In the beginning it was the weather that held them up. He was sailing on a 2017 Bavaria 51c with a crew of four and was therefore at the whim of the weather.

But this is not a weather story. 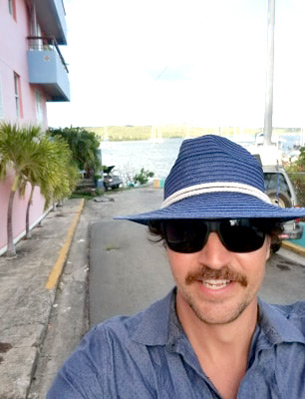 “When we got to Turks and Caicos things were getting more iffy,” said the 38-year-old in a phone interview. “And when we got to Culebra, the town was shutting down. One day we had everything at our disposal – restaurants, stores, showers, washrooms, water – and the next day all the workers had left.

“The town was closed, and the townspeople sure didn’t like that we were there.”

Unbeknownst to Sobol, residents of Puerto Rico were ordered into 24-hour isolation on March 16 after five cases of COVID-19 were confirmed on the island.

Only authorized personnel and those seeking food, gasoline or medical service are allowed outside during the day, with a strict 9pm curfew. The lockdown there is expected to go on at least until March 30.

“It’s a nice place to be stranded but the people here are on edge. And we had no information,” Sobol said, adding that because of the language barrier, it took some time to understand why police were driving around, why sirens were going off in the evening, and why there were no people on the other boats at the marina.

“Three days ago it was fine. Then it just changed,” he said last week.

Thankfully, his family in Fergus pressured him to change his flight and get back to Canada before all international flights were grounded. He returned on March 22 and is now confined to his home for the next 14 days.

“The flight was kind of weird,” he said over the phone on March 23. “Everyone was wearing masks and gloves and sitting away from each other. No one really wanted to talk.”

His family left provisions so he thinks he’s in good shape for the 14 days. So far he has no symptoms of COVID-19, he said.

“It’s weird here now, too. No cars going down the street, no one outside. It will take some getting used to,” he said.