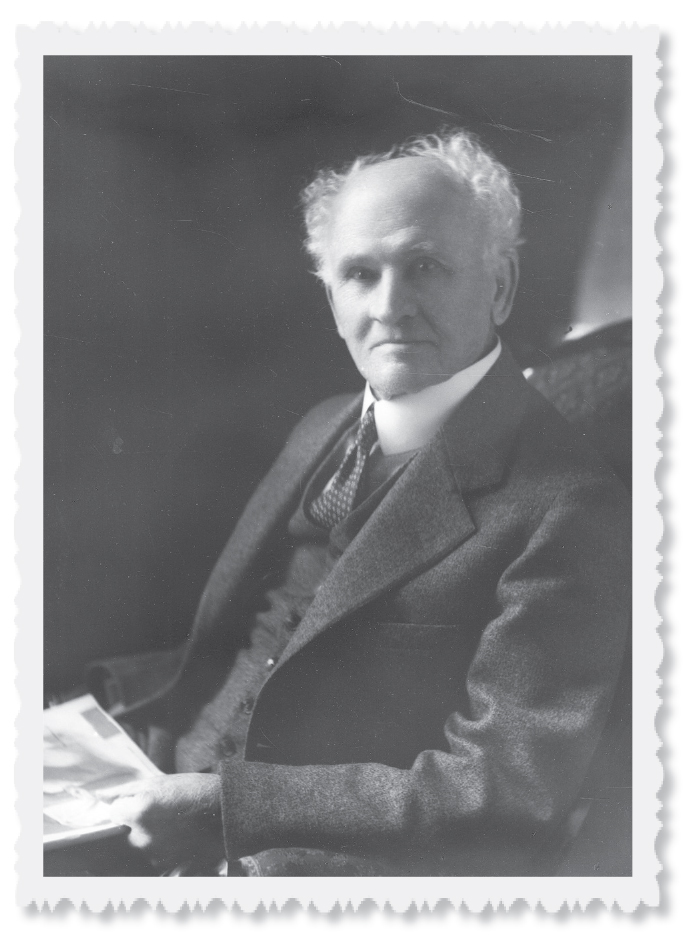 Fergus doctor - This portrait of Dr. Abraham Groves dates from the time of his research for a treatment for anemia, around 1927. Wellington County Museum and Archives, ph 3909

Some people seem to loom out of Wellington County’s history as characters larger than life. Dr. Abraham Groves of Fergus is one of them.

There always seems to be something new to discover about these people. Recently I stumbled upon one of Dr. Groves’ last developments in his long career. Like many doctors of his generation, Dr. Groves dabbled in all sorts of business ventures. Some of these related to medicine, like his hospital. Others, such as his flour mill and his electrical plant, did not.

Dr. Groves, over a career that spanned more than 60 years, always kept his feet firmly planted in medicine, even though other matters occasionally diverted his attention. Unlike some doctors, old Abe Groves constantly studied medical journals and new texts. He eagerly embraced new methods until his retirement.

Perhaps the best known of Dr. Groves’ innovations was his work with x-rays, both for diagnostic and therapeutic procedures. His hospital installed one of the first x-ray machines in Ontario. In the 1920s two machines operated. Among other things, Dr. Groves used x-rays to cure various skin ailments.

Less known is some work later in the 1920s, involving a treatment for anemia. In this case, he worked with his son, Dr. William A. Groves. After he graduated from medical school in 1904, young William practiced in Fergus for a couple of years, but then moved on to Stratford, London, Leamington and then Saskatchewan, where he had a civil service position. He enlisted in the medical corps during the First World War.

In truth, William never wanted to be a doctor, and did so only under extreme pressure from his father. He much preferred laboratory and research work. In Fergus, the two had quarreled frequently. Dr. Abraham Groves was always a difficult man to work for and with. He was never able to hold on to a partner, staff doctor, or x-ray technician for very long.

In the early 1920s, Abe Groves began thinking about retirement. He wanted his son to return to Fergus to take over management of the hospital. William agreed reluctantly, and on the condition that he be able to set up a lab in the hospital.

During the spring of 1927, the two men co-operated to develop a treatment for anemia. This consisted of an extract of raw beef liver, administered to patients in capsules. William did the bulk of the work in developing the new method. Abe immediately saw a commercial potential. He arranged for a supply to go to medical colleagues in the area, and he asked that they supply him with the results of the treatment.

It is useful here to look at the history of the treatment of anemia. In 1875, an American doctor published an article on bone marrow irregularities in patients with anemia, but for the next half century, no one was able to discover what exactly caused these patients to stop producing a sufficient number of red blood cells to keep them healthy.

In the early 1920s, three doctors and researchers associated with Brigham Hospital and Harvard University – William Murphy, George Minot and Homer Wright – developed a theory that the ailment was the result of a nutritional deficiency. Some work by a fourth researcher, George Whipple, reinforced their ideas. Whipple demonstrated that a diet rich in liver stimulated the production of red corpuscles in dogs.

In 1925, Minot and Murphy began to recommend that their anemia patients eat a diet rich in liver, and raw liver if possible. The vast majority of the medical profession scoffed. They could not believe that a problem that had frustrated the profession for so long could have such a simple answer.

Nevertheless, Murphy and Minot delivered a paper at the 1926 meeting of the Association of American Physicians, and it was printed in the August 1926 issue of the Journal of the American Medical Association.

Dr. W.A. Groves read this article with much interest. He had been dabbling with the same problem for years in his lab. He followed the Boston method for several months. By the end of 1926, Murphy and Minot had successfully treated 45 patients with their liver diet.

There were obvious problems. Most people hate liver, and many cringe at the mere thought of eating raw liver. And the diet required a lot of liver – at least a half pound per day. The Boston doctors needed to feed their patients through a stomach tube.

The capsules developed by William and Abraham Groves neatly dealt with this problem. Their extract reduced the amount necessary to only an ounce or two daily, a quantity that could be taken palatably with a handful of capsules.

They began treating their Fergus patients with their capsules in March 1927, and achieved results equal to those reported from Boston. Dr. William Groves carefully tracked the blood tests and red corpuscle counts in the hospital lab. Dr. Abe Groves, meanwhile, tried to interest other doctors in the method and to publicize the work.

Unfortunately, two developments frustrated the work in Fergus. First, Abe Groves and his son began squabbling again, and they never managed to set up a proper trial for their capsules or to publish anything on their method. Consequently, the Groves capsules never went into commercial production, as Dr. Abraham Groves had hoped.

Meanwhile, events elsewhere overtook them. Elwin Cohn, a biochemist at Harvard, developed a concentrated extract of liver that proved to be effective in capsule form. After suitable trials, Eli Lilly secured the licence for commercial production in 1929. Another researcher identified the “intensive factor” that made liver a useful treatment. This soon received a permanent name, Vitamin B12.

Two years later, researchers working with Murphy, Minot and Wright developed a highly effective injection of Vitamin B12 that became the standard method of treating anemia.

The 1927 anemia cure tantalized Dr. Abraham Groves with a last grasp at fame and fortune. His work and that of his son was remarkable for a small country hospital. They had kept pace with the much better funded and equipped work in Boston. In the end, though, they did not have the resources necessary for modern medical research, or the pool of specialized scientists as their colleagues.

William and Abraham Groves endured a stormy relationship for the rest of their lives. In the end, Abe Groves decided to give the hospital to Fergus in 1932, rather than leave its management to his son. He died in May 1935. His ill-starred son committed suicide five months later, at the age of 58.

The Boston doctors and researchers ultimately achieved fame and recognition for their work. Three of them, Murphy, Minot and Whipple, received the 1934 Nobel Prize in Medicine for their treatment of anemia.

*This column was originally published in the Wellington Advertiser on July 18, 2003.