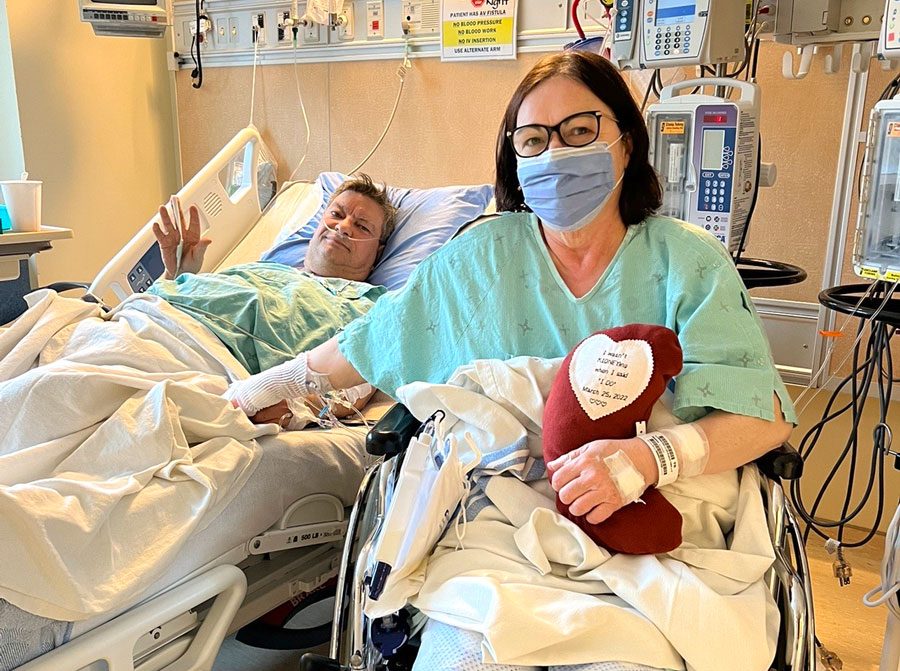 Shelly Hunter donated a kidney to her husband Les and now they can both enjoy a long and healthy retirement together. The Fergus couple celebrated their 35th wedding anniversary on April 4. Now Les will have some trouble topping that gift. Submitted photo

FERGUS – Les Hunter will have a hard time topping the gift his wife Shelly gave him for their 35th anniversary, but thanks to the gift, he’s got a lifetime to try.

Shelly gave Les a kidney and now they both get their lives back.

Les has polycystic kidney disease, which is a condition where clusters of cysts develop within the kidney. The cysts grow and eventually stop the kidney from functioning.

It’s hereditary – his father died from it at age 67; his siblings have it although to a lesser degree; and one of their sons also has the condition.

For Les, 60, it’s meant four years attached to a dialysis machine with a health outcome that would only get worse.

“He’s on the machine, but it’s us,” who are affected Shelly said. “If he can’t travel, I can’t travel. Our life has been centred around dialysis.”

The Hunters were living in Campbellford, near Peterborough, when Les was suddenly weak and breathless from cutting the grass.

“We knew dialysis was coming, but this was it,” he said in an interview from the couple’s Fergus home on April 2.

They went to the hospital and learned they could do hemodialysis at home, so that’s what they chose to do, rather than going to a dialysis clinic.

While easier at home in many ways, it took eight weeks of training to learn how to use the machine, clean it, and hook it up properly.

The Hunters moved to Fergus in 2020 and Les was transferred to Grand River Hospital in Kitchener for his care.

He still opted for home dialysis, but that required another training session as the equipment was different.

In the meantime, Les was put on a transplant list.

“I was in the process of being tested and then COVID hit,” Shelly said.

They got a call in February of this year saying they were on the cancellation list and then, finally, on March 25 doctors at Toronto General Hospital transplanted a healthy kidney from Shelly to Les.

Shelly said she did do some soul searching when deciding to donate her kidney.

Although blood relatives are more likely to be a match, both of Les’ siblings have the disease and therefore are not donor candidates.

And Les didn’t want any of his kids to donate a kidney to him. With one son diagnosed with polycystic kidney disease, the other kids’ good kidneys might be needed by their brother one day.

“At first I wasn’t sure if I should go forward with it. Who would take care of us?” Shelly wondered out loud.

“But I have no second thoughts. Why would I?”

People only need one functioning kidney to live, she said, and the risk to her is the same as with any other surgery.

The new kidney will extend Les’s life for 17 to 20 years, and if this kidney fails again, he can go back on dialysis.

Les said his kidneys were functioning at 8% when he started dialysis four years ago and had decreased to 6% the day before the surgery.

A week after the operation it was functioning at 51%, he said.

Les will always need to take medication and he’ll always be autoimmune suppressed, so his body doesn’t reject the new kidney. And the two of them will have to take it easy while their incisions heal.

But the dialysis machine in their basement – as big as a furnace – can go back to the hospital for someone else to use.

They can go to the cottage for more than two-day stretches. And Les might get back to curling and other activities he used to enjoy.

But their big message is about organ donation.

“Register to donate your organs,” he said. “We’re all full of spare parts and when you’re dead, you don’t need any of them. And it really changes people’s lives.”

And when it comes to kidneys, you only need one functioning kidney to live, he said.

“If you want to donate, they’ll match you up” with someone who needs a transplant, Les said. “I got mine but there are thousands out there waiting.”

The Trillium Gift of Life Network, which is responsible for coordinating organ and tissue transplants and donations, adopted a new way of registering in 2008.

No longer do you sign a donor card with your driver’s license, as paper donor cards are often not available when needed. Now donors can register online at www.BeADonor.ca or in person at any Service Ontario location.

According to the network, 90% of people say they are in favour of organ donation but only 35% have registered.

And with advances in transplant medicine, living donations are now possible for kidney, part of the liver, lung, small bowel and pancreas.

“So many good things can come from organ donation,” Les said. “I hope people will give it some thought.”