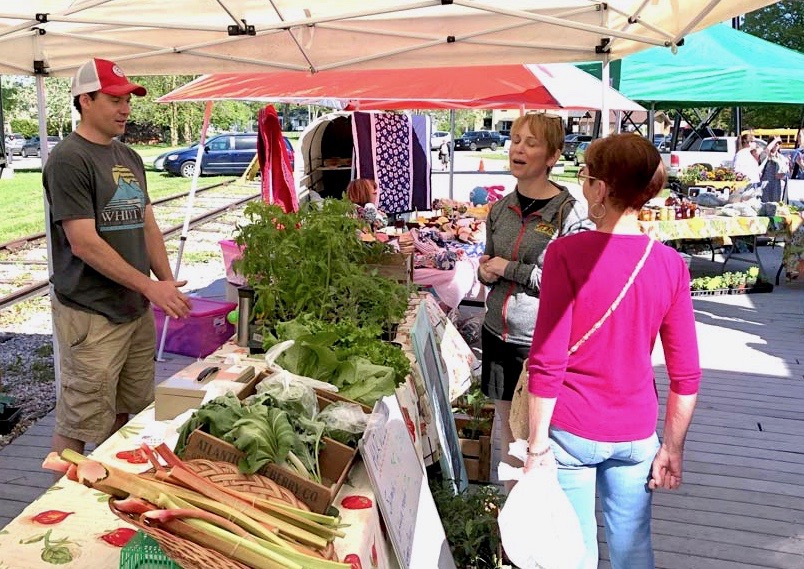 The Minto Farmers Market in Palmerston ran on Saturday mornings at the Palmerston Railway Heritage Museum in 2019. Advertiser file photo

WELLINGTON COUNTY – The journey from farm to fork is fraught with challenges during a pandemic.

Wellington County is filled with farms, food processers and markets; has a strong local food network linking producers with consumers; and has a consumer base that’s passionate about buying locally grown food.

But this year, getting produce and product from point A to point B will not be a straight line.

Joanna Steckle is taking the one-day-at-a-time approach as growing season is well underway in her greenhouse and provincial direction is still hazy on how markets and roadside stands can operate.

Steckle’s Produce and Flowers is a family farm just outside Harriston that operates a market garden and garden centre from the garage.

They started planting their selection of ornamental bedding plants, herbs, hanging baskets, perennials and vegetables in the greenhouse in February.

“So by the time the virus hit, we were underway. There was no turning back,” Steckle said in an interview on April 16.

Right now, the six family members who live in the house are enough to tend to the plants in the greenhouse. But by June they’ll need to hire a few extra hands as they also grow a cash crop of cattle feed.

“We can be open, but how will we do it?” Steckle asked. “We got an email from public health giving us some guidance.

“We have to treat it like at the grocery store. There’s just nothing to do about it. We’ll have to limit numbers and people will just need to cooperate. I don’t look forward to policing that, though.”

Choosing plants is often a matter of the heart for gardeners, but there will be no impulse buying if customers can only place orders online, she predicted.

“There’s a specific window to get plants in the ground or they are no good to you,” Steckle said.

“So far so good I guess, but we’re taking it one day at a time. We’re not planning too far ahead.”

Christina Mann, coordinator of the TasteReal program run through Wellington County’s economic development office, said farmers and marketplaces are trying to figure out how they can operate this year.

Farmers’ markets are still considered an essential service under the latest list from the province, but they’ll look completely different and will only be able to sell food – no craft or artisan products.

The first is a market in a physical space with vendors and shoppers, but with specific details about the space between vendors and shoppers, cleaning protocols and pre-packaging product to reduce contact. The overall plan must include details about traffic flow through the space and must be approved by landlords or property owners and public health.

The second option is an e-commerce model with a drive-through or walk-through pickup area. Orders are pre-paid, and individuals remain in their vehicles. There are also specific cleaning and sanitizing protocols for volunteers and vendors.

“The immediate future of markets is uncertain,” said Mann, adding there’s a strong will in the county to have them open, and planning is underway.

Not only will they operate differently, they’ll feel different, too.

“Farmers’ markets have become meeting places for the community, and they can’t be that now,” Mann said. 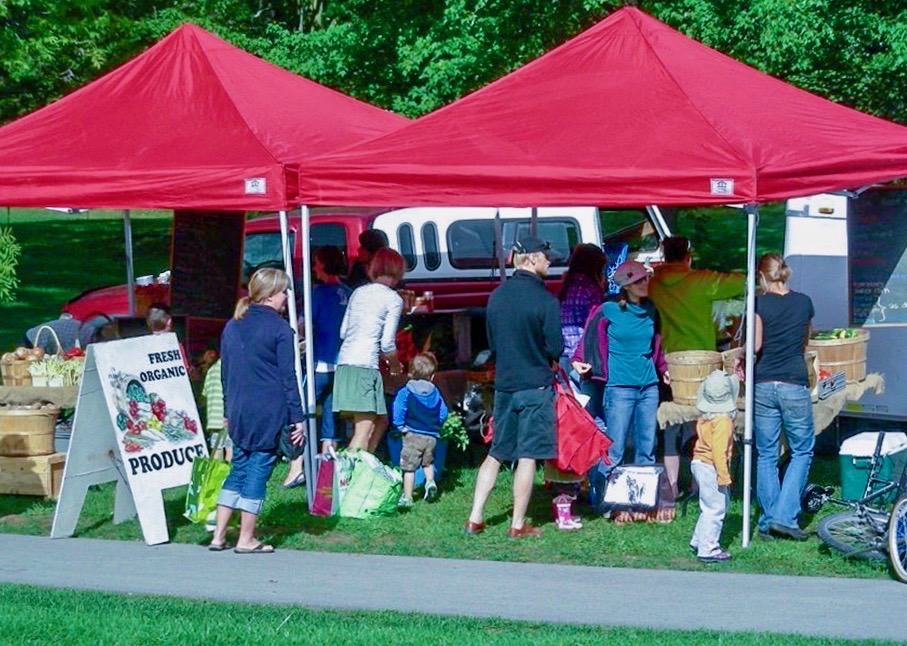 The Elora Farmers’ Market in Bissell Park usually opens for the season in May. Advertiser file photo

Elora Farmers’ Market manager Barb Lee said her team is working on a plan to open the Elora market, but nothing is written in stone.

At this point, it looks like they will be able to hold the market in Bissell Park, the usual location, and the team is working on an online portal so farmers can advertise their selection and shoppers can pre-order produce. In this way, the market would operate like a pickup hub.

But the market also might be able to have vendor tables for shoppers who haven’t pre-ordered.

“We are concerned with access to local food, but we need a viable, safe system for the public and for growers. So, it’s important we get it right,” Lee said.

There are about 10 farmers’ markets in Wellington County, and each is working on a plan to operate. Those plans have to be approved by public health before the markets can open.

Lee said they hope the Elora market will be able to open in June, but that is subject to change.

Another way to access locally grown food is through community shared agriculture (CSA) programs, and they are still a go.

They will generally operate the same as usual this year, Mann said, but there are changes around distribution and members won’t be able to hand-pick their product.

CSA, also called farm share, is a program that links farmers with consumers. The consumer buys a share of the harvest from a participating farm and produce is distributed weekly to members throughout the season.

The cost, product that’s grown, and duration of the program are set individually by each farm, but costs range from $145 for a small box in a five-week plan to about $700 for a large box in a 22-week plan.

With COVID-19 protocols in place, farmers are figuring out how to hand-off product while respecting social distancing regulations and keeping gatherings to fewer than five.

“Each farm is handling it differently,” Mann said. “They are looking at delivery-only options (rather than picking up at the farm). There may be home delivery, or pickup with social distancing. They’re figuring it out.

“But logistically and from a convenience point of view, this is still a great option for consumers.”

The big costs for farmers typically come at the beginning of the season, so to have this kind of cash flow is enormously helpful, Mann said.

There are 15 farms offering CSA plans this year in the region; information can be found on tastereal.com.