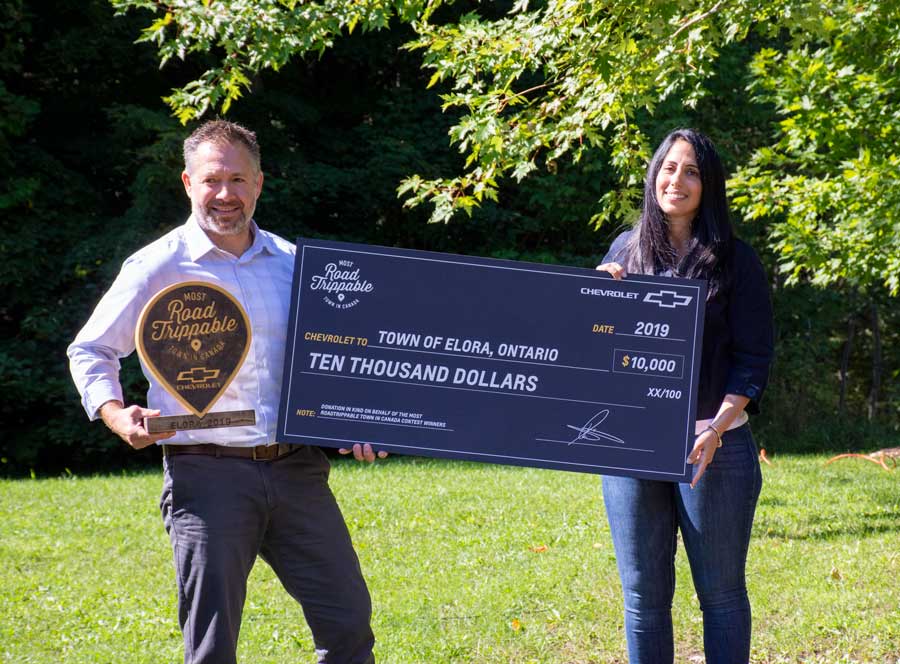 ELORA – Elora has been named the “Most Road Trippable Town in Canada.”

In a plaque-revealing ceremony on Sept. 5 in Victoria Park, Chevrolet Canada made the official announcement and acknowledged the Shaver family from Huntsville, which helped put Elora on the map.

“I think this is awesome for Centre Wellington,” said Mayor Kelly Linton. “The people …  who live here and grew up here, we kind of take some of these things that we have to be proud of for granted … So when it’s recognized … across Canada, that’s really special.”

For the second year in a row, Chevrolet Canada invited nine families to take a weekend road trip in a Chevrolet vehicle to discover their province’s most scenic routes.

The Shavers, including dad Morgan, mom Kristie and daughters Nova, 8, and Luna, 4, travelled from Huntsville to Elora in a Chevrolet Equinox on the weekend of July 13 and 14.

Kristie found out about the contest on Facebook and decided to apply.

“We had to send in photos of all of us and just mention what we were into … and once they came back to us, they said ‘can you send us a super quick video …’” she explained. “So we all just sat in the driveway and we were in a big rush and we just each introduced ourselves.”

As the winning family, the Shavers also get to keep the Equinox.

“It was comfortable and it was just nice,” Kristie said. “It was just so perfect for what our family dynamic is.  We fit in there comfortably. “

The Shavers could choose whatever they wanted to do on their road trip to Elora provided it was documented with videos and photos so they could compile a 60-second video for the contest.

They left on July 12 and spent the first night in Horseshoe Resort in Barrie before heading onto Elora.

“I really liked all the adventures,” Nova said. “We went to see … the Elora Gorge. It was really pretty and I also really liked the car.”

The family went “treetop trekking”, on a slip and slide down a ski hill, walked the trails, visited downtown Elora and more.

“We were raised about an hour from here and had never been here,” Kristie said. “So this was really nice to experience how beautiful it was and … we went all around the Elora Gorge Conservation (Area).”

The Shavers said they are looking for activities to do when they return.

Kristie added, “It also reminded us a little bit of going to Europe, which is what we really love. We love the old towns.”

However, this was the Shaver’s first road trip.

“It’s something we’ve always wanted to do but we didn’t plan it,” Kristie said. “We had just such a beautiful time connecting together …  I think everyone was just at ease and comfortable and we just enjoyed every minute of the whole thing.” 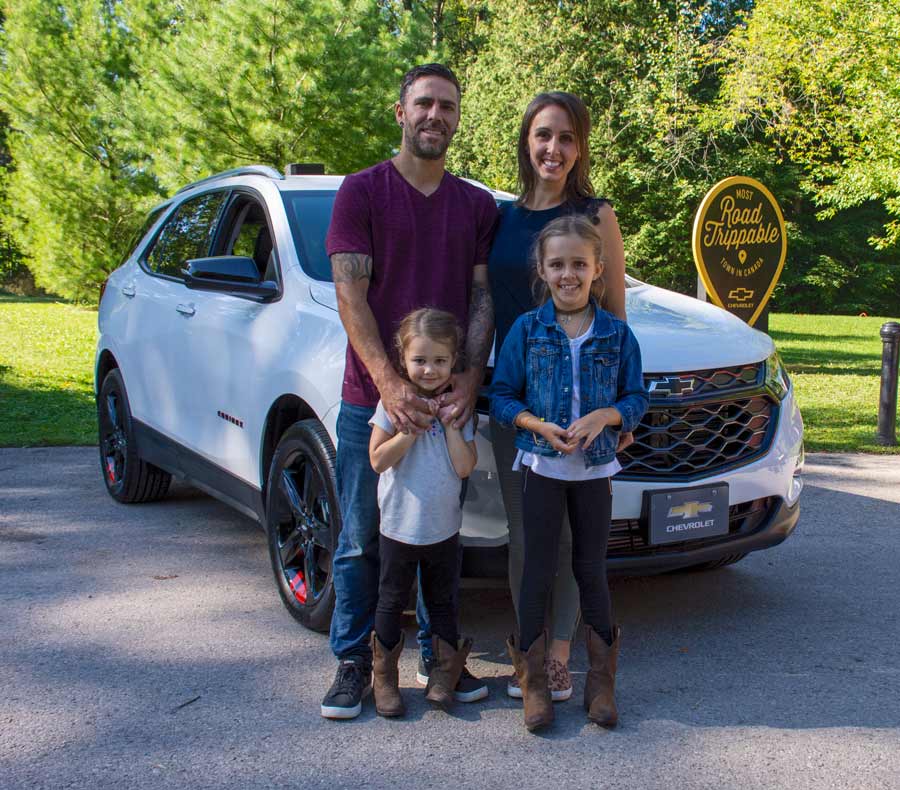 “I really liked spending time with the family,” she said. “That was a really nice thing that we did.”

Gary Cooper, director of sales at Barry Cullen Chevrolet, said he remembers the first time he came to Elora on a train from Hillsburgh with his school group and then seeing Lover’s Leap with his mother and aunt around the same time.

“I hope the children … have the same memories,” he said. “I hope they can relay their story just like I did.”

Having owned a dealership in Elora, Cooper is proud of the town.

“This is a bit of heaven, we all know that. It’s just beautiful,” he said.

In addition to the sign revealed on Sept. 5 at Victoria Park, Centre Wellington also received a $10,000 in-kind donation from Chevrolet Canada.

“We’ll put it to something that is recognizable … that people can see and we can use it to leverage more attention for Centre Wellington,” said Linton.

“This time Elora, Fergus’ time is coming for sure.”

He said the recognition acknowledges the work and investments put into the township.

“This was kind of a hidden gem for a lot of years,” Linton said. “People want to visit here and it’s a great place and we’re making sure that we have more things for people to do, families to do and I think it’s going to be great.

“People are going to see this young family who is choosing to come to Elora and say ‘hey maybe that’s something we should do.’

“It just kind of gives us a little bit more motivation to continue to make this a great place for families to come and visit and spend the day and spend more than one day.”