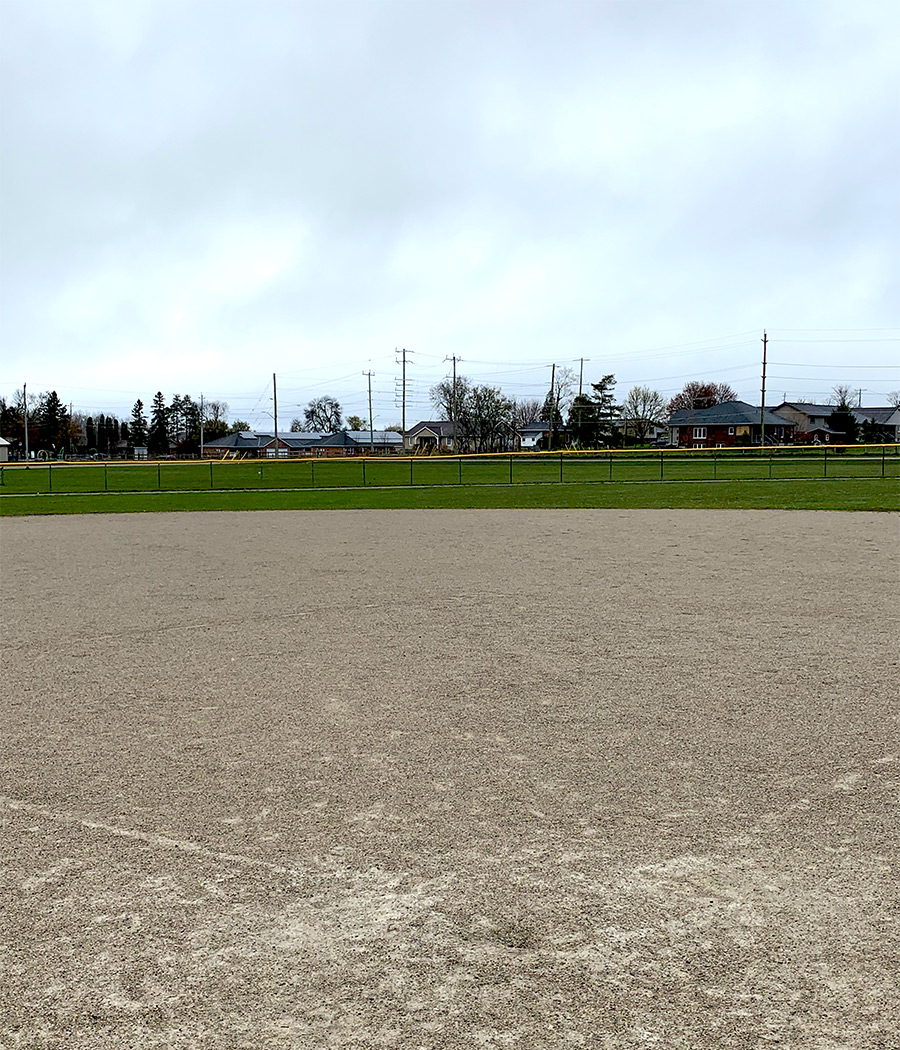 Diamond upgrades planned - The south-end baseball diamond, located at 320 King Street East in Mount Forest, will be re-named the “Donald Softball Diamond” in recognition of the family’s $100,000 donation. Photo by Curtis Gordon

MOUNT FOREST – The Optimist Ball Diamond here will soon be receiving major upgrades, thanks to a $100,000 donation from Jim Donald and his family.

The donation will cover costs associated with the installation of new fencing, red clay surfacing, and to support the Mount Forest Minor Baseball Association with its upgrades to the players area.

The remaining funds will be placed in an account with the township for future projects.

At its meeting on May 10, Wellington North council voted unanimously to direct staff to work with Donald to implement the works associated with the donation at the ball diamond at the south-end of the Mount Forest fairgrounds property, as recommended by the Recreation, Parks and Leisure Committee.

The diamond is located at 320 King Street East in Mount Forest.

Council also approved a special 2021 capital project of $30,000 to allow staff to construct improvements that fall outside of the scope of the donation.

The $30,000 was recommended by staff to improve drainage issues at the time of construction.

The additional $30,000 to complete the project will be funded by the township’s Capital Infrastructure Reinvestment Reserve Fund.

Additionally, council voted to formally name the ball diamond the “Donald Softball Diamond” in recognition of the family’s donation, until Dec. 31, 2041.

Councillor Steve McCabe was thrilled with the donation.

“This should be trumpeted all over the municipality,” he said.

“It’s going to be a wonderful addition.  It’s going to be a clay-based ball diamond, which we don’t have anywhere in our municipality yet. It’s a huge donation from the Donald family and they need a huge shout-out.”

McCabe said the donation adds to a string of successes for the recreation, parks and leisure department. The township recently received a grant for upgrades to the Arthur Pool, and the arena floor in Arthur has been undergoing upgrades as well.

McCabe said this work has been going “extremely well.”

He added the stone dust that is currently at the Optimist Ball Diamond will be moved to other ball diamonds in Mount Forest.

Mayor Andy Lennox said this is a good time to have outdoor amenities upgraded, so people will be able to enjoy them when pandemic restrictions are eased.

“While nobody wants to have these outdoor amenities closed right now, certainly this is a good time to get this work done so that when we can re-open them, people will be able to enjoy them,” Lennox said.

“With all that pent-up demand that we know exists out there, hopefully we can get back to using those outdoor amenities.”

“The deputation back at the February recreation meeting indicated there would be no financial impact to the municipality,” she said.

“How did we arrive at this point? It’s a tremendous gift (the donation) and I don’t want that to not be recognized, I just want to ensure we’re getting it right.”

Burke also was unsure that resurfacing the diamond with red clay was the best option.

“My understanding is it’s significantly more work to maintain this type of infield surface,” she said.

Matt Aston, Wellington North’s director of operations, explained the $30,000 will go toward installing drainage and removing the existing stone dust, as these items are not being covered by the Donald family.

“The drainage is thought of as a way of protecting that red clay,” he said.

Lennox said he believes the red clay is a superior playing surface and installing the drainage system now will lead to lower long-term costs associated with the diamond.

“Certainly, it’s outside of our original budget, but in my mind, it represents an improvement that was probably needed there anyway, from a drainage perspective,” said Lennox.

CAO Mike Givens said the additional maintenance work required will be offset “significantly” by the $100,000 donation.

Councillor Dan Yake agreed that the maintenance of the diamond would not be an issue.

“I think had there been serious concerns in regard to the maintenance and operation of a red clay diamond, those would have been brought forward,” he said.

The completion of this project is scheduled for this fall.