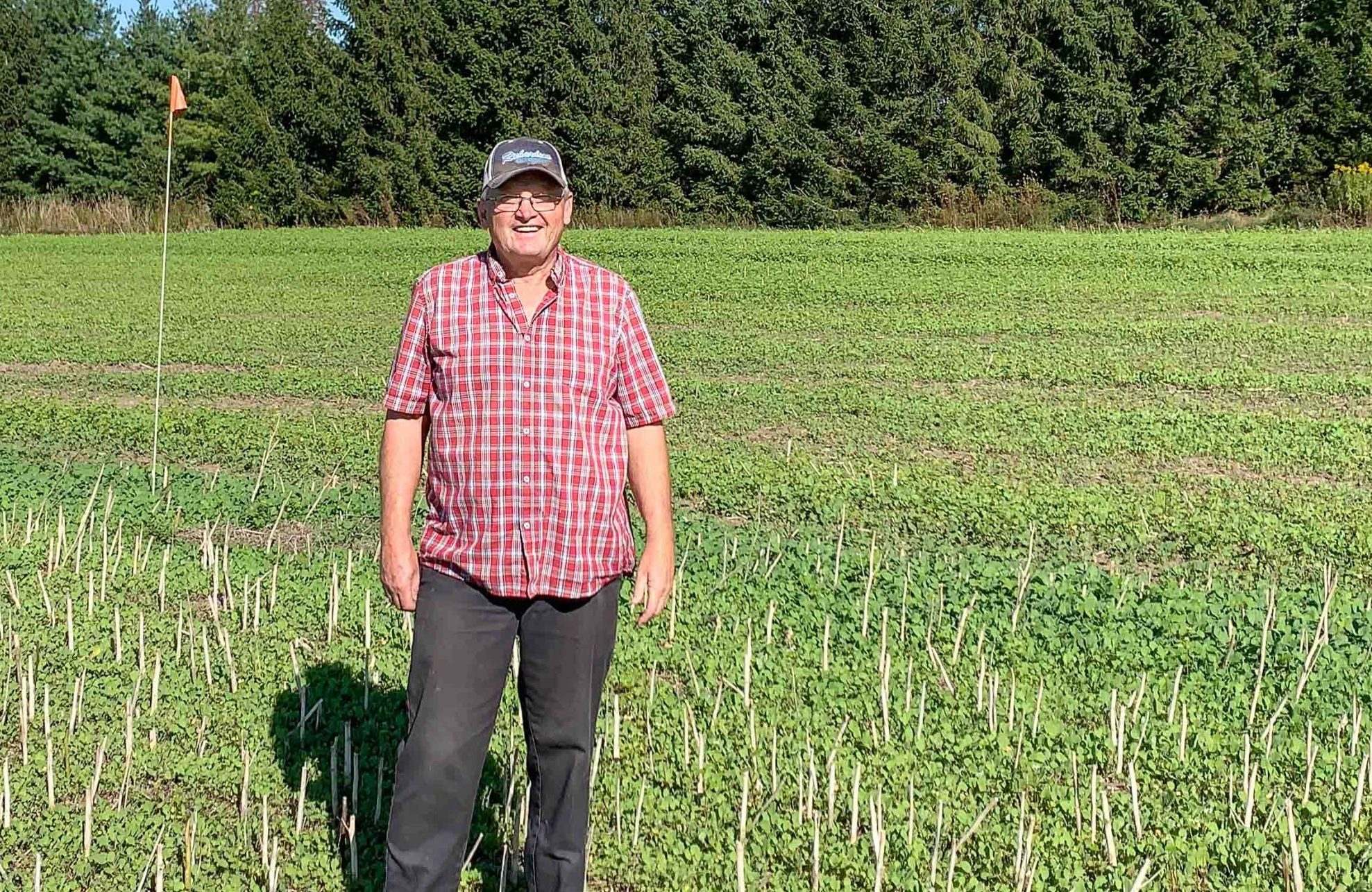 WELLINGTON COUNTY – The first round of the county’s Experimental Acres pilot may have come to an end, but the experiments don’t stop here.

Sourced from a $10-million Smart Cities grant, the county’s Experimental Acres funding opens up this month for a second round.

Guelph and Wellington County won the $10-million competition in 2019 with a proposal to create Canada’s first circular food economy, dubbing the project Our Food Future.

This past season was a trial for the first experimental acres plots throughout Wellington and Dufferin counties.

Farmers applied at the county level, with successful applicants provided  between $1,000 and $3,000 to execute an experiment on their land with the goal of improving soil health and reducing greenhouse gas emissions.

The regenerative agriculture aspect — using natural cycles of plants and animals to feed land — is thought to check off the circular food economy goal.

Stuart Wright is a fourth generation dairy farmer in the county and has had his hands in the dirt since childhood.

Wrighthaven Farm milks 77 cows and crops around 1,000 acres in the county.

At a summertime visit to his experimental plots in Wellington North, Wright talked of the importance of addressing greenhouse gas emissions in the face of a changing climate.

“We’re in a new world; all farmers understand it now,” he said. “I respect that the county is trying to be part of the solution.”

Wright wants to establish a winter crop rotation of winter wheat, canola and barley, and tried this year to incorporate buckwheat as a cover crop during the summer, thanks to the experimental acres funding.

Our Food Future incentivized the experiment by providing $2,000 toward the $3,300 cost of seeding.

Buckwheat was then sown ahead of plans for winter barely. Buckwheat smothers weeds, makes desirable soil tilth, and holds onto phosphorus, making it more available for other plants.

A couple acres of land sectioned into three plots (two worked and one no-till) have been planted with buckwheat.

But Wright discovered volunteer canola from the previous crop got out ahead of the buckwheat.

In hindsight, Wright said he should have sprayed off the first flush of canola to give the buckwheat a level playing field.

There was also leftover canola straw that may have stopped the buckwheat from getting into the dirt.

“It’s experimental, you learn on the go,” Wright said.

“You always like it when things work out the way you hope, but even when they don’t, you learn something.”

Wright’s goal was to find out how much volunteer canola and other weeds could be reduced without chemical intervention ahead of the winter barley crop.

“I knew I wouldn’t get perfect weed control, but I thought it would compete with it to the point where it would reduce the amount (of volunteer canola),” he said.

Wright was last debating when to sow the winter barley, but was certain the plots would have to be sprayed down with chemicals to give the barley a chance.

“We’ve given ourselves the opportunity to maybe reduce tillage, and reduce greenhouse gases, and reduce chemicals, but it just didn’t work out,” he said.

Wright never imagined buckwheat being practical on a grand scale, but rather on the borders of fields near bodies of water where phosphorus runoff is a major problem during springtime melts. 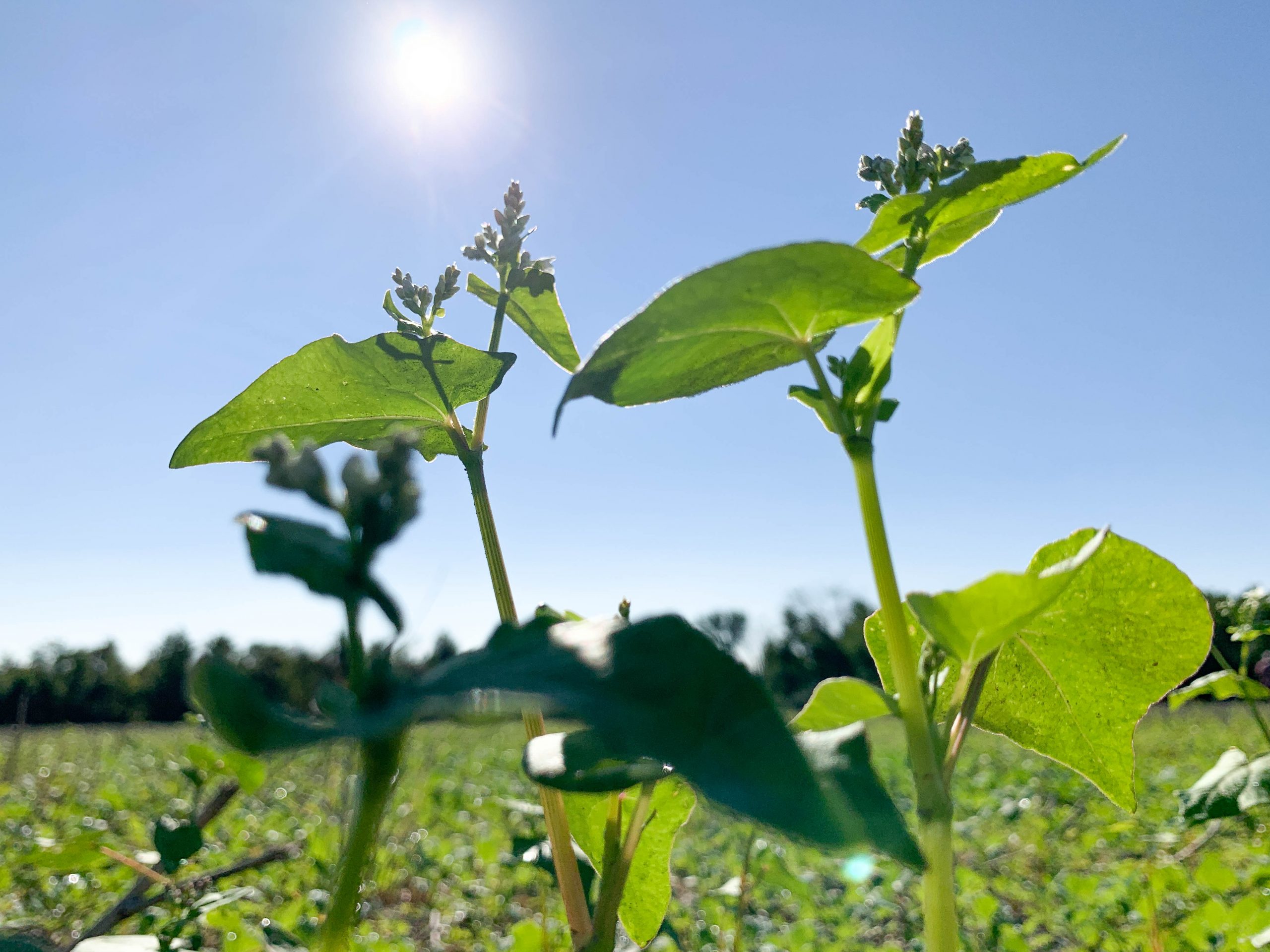 Buckwheat pokes out from an “experimental acres” plot in Wellington North. Photo by Jordan Snobelen

Learning what works is just as important as finding out what doesn’t, he says.

“You can just hide your head in the sand, or you can go out there and you can try stuff.

“Sometimes the lessons will be painful and that’s why you do it on a small scale with some support.”

“And lands will do that naturally given the right kinds of practices.”

The agriculture sector is already responding with changes to the way things are done on a large-scale, but there’s a gap for small- and medium-sized operations when it comes to on-farm experimentation.

“They may not have 200 acres of crops to make a change in right away, or they want to try something with the edges of their field, or their small number of animals,” Dainard said.

That’s where Experimental Acres comes in.

“We can fill this gap … and offer just enough support for a farm to self-evaluate what works on their land and with their animals,” she said.

If a small-scale and less costly experiment were successful, a farmer could justify spending more to expand the concept.

Dainard blames dry weather for the failure of some plots this year, but said change comes slowly.

“When you’re focusing on soil health, it really will be about four or five years of this change of practice before you have a measurable difference in the soil,” she said.

Sustainability program coordinator Jordan Brigg is following up with this year’s participants to see who is interested in ongoing evaluation.

“If our pilot becomes a program, maybe we can check back in a few years to do another soil test to see how that difference is measurable,” Dainard said.

Getting inspired by farmers and feeding their curiosity through the nimble program has been “fun and rewarding,” said Dainard.

Beginning Nov. 14 and through December, applications for 2023’s pilot are being accepted at wellington.ca/experimentalacres.