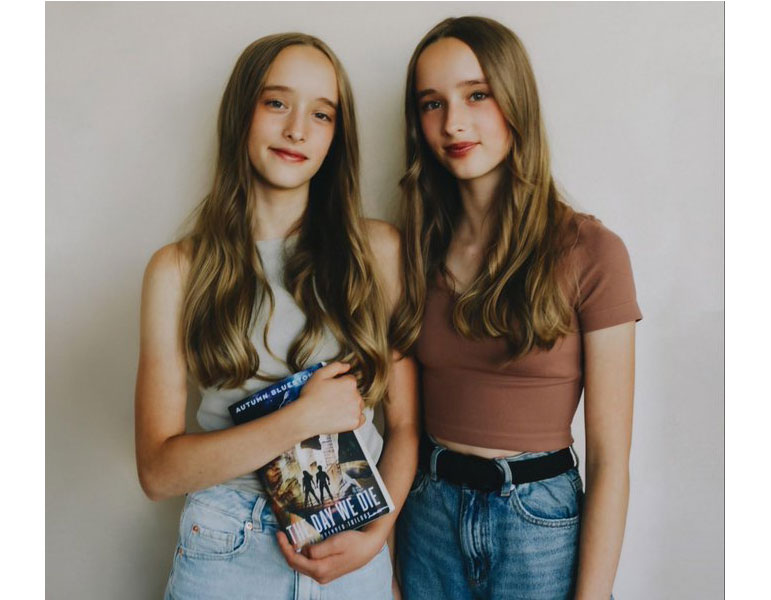 Sisters Sofie (right) and Maya Jenkins are excited to announce the release of their self-published novel, The Day We Die. Submitted photo

ERIN – Authors and sisters Sofie and Maya Jenkins are excited to announce the release of their self-published novel, The Day We Die, written under the pen name Autumn Bluestone.

What began as a recreational activity among friends has evolved into a published novel.

The Jenkins sisters began their writing career not with the intention to publish but for fun at the age of 10.

Now 13, and 569 pages later, the Erin twins are published authors.

The Day We Die, a dystopian novel set in a futuristic society, features 16-year-old Tessa as she navigates life and tragedy in the year 2070, where the entire world began—and barely survived—a massive war over the last resources left. The book comes as the first of the Branded trilogy.

“Readers can expect an emotional roller coaster filled with the action, harrowing experiences and daring adventures of the dystopian genre from The Day We Die,” the duo explained.

“A big part of it is experiencing what Tessa feels, really connecting to her friendships and going through what she feels emotionally and physically,” Sofie explained of what to expect from the novel.

Their pen name, Autumn Bluestone, originates from their favourite season and a favourite colour that also couples as a childhood memory.

“We chose our favourite season, which was autumn, and because we generally thought that was a beautiful name, and then for the last name it was kind of a combination of our favourite colour at the time which was blue,” Maya explained, and a reminder of when they were younger and would collect sea glass along the beaches of Toronto.

The duo began writing The Day We Die in September 2019 after reading The Hunger Games trilogy and finding themselves inspired by the dystopian genre.

The girls explained the story developed from the idea that non-renewable resources in today’s society are beginning to disappear.

From there, they began to question what might happen after society runs out of the resources needed to survive, which is how the novel was born.

They said the book initially started as a collaboration among friends but eventually people stepped away and it evolved into them wanting to create something they would later publish.

So they began working towards that goal.

The inspiration behind the writing

For their inspiration, as they were reading and expanding the genres they enjoyed reading for pleasure, they began adding in and seeing things they liked in other novels.

“And then trying to add some of those elements into our book …. important things like how to write a good friendship and the kinds of characters we liked,” Maya explained.

“We kind of reflected on all of that and tried to incorporate those things into The Day We Die so that it turned into something that we could enjoy and that would be generally a better novel.”

“Reading stories that inspire, move and excite us helped us create a more exciting plot that included the elements we most liked from each book we’ve read,” Sofie added.

“In a way, The Day We Die is like a patchwork quilt made up of many genres and different messages.”

Not only is the book built on action and adventure, it also focuses on mental health and other important messages, Sofie explained.

“We strived to include important ideas such as mental health, economical awareness, suicidal ideation and true friendship,” she said. “The Day We Die contains many necessary elements that we believe should be talked about more often by young readers everywhere.”

The girls said another important part of what they’re hoping to do with the novel is educate students and kids.

They found while many of the novels they read in school contained strong messages, they had yet to encounter a school setting with books based on the mental health of teenagers.

“Our hope is that teachers will see The Day We Die and use it to share with students about components such as grief, depression and suicide, all three of which are messages that we believe aren’t visited often enough at school and are obviously incredibly important for all young people to learn about,” the girls wrote in an email response.

The duo admits there were challenging times during the writing process, adding although they’re twins, they don’t always see eye to eye.

Dividing the work between the two wasn’t so hard, but balancing their different working styles, speeds and strengths had its challenges.

“I remember along the way Maya would go slower through things, but she didn’t have as much motivation to go as fast, where I was just like ‘let’s get it all done fast’ and it was really hard to incorporate since we were working together,” Sofie explained.

“It was definitely a struggle,” Maya added. “Especially with COVID, since we were with each other all the time and we had to kind of face those arguments more often than if we were able to go to school and hang out with friends.

“But I think being sisters did help with the plot because while we may see things differently, we kind of agreed on most of the larger points in the story and we know how to work together.

“We make a good team so that was probably a crucial element in how we pulled through and were able to publish.”

In terms of next steps for the young authors, they say it will definitely involve writing the second instalment in the trilogy—which Maya has already started working on—so readers can see what happens next in Tessa’s story.

The pair said while it feels good to have the book completed and published after spending so long working on it, it’s just the beginning for them.

“We ran into a lot of troubles along the way, but it feels really good to be able to know that we were able to overcome all of those,” Maya said.

“It’s also kind of a little bit overwhelming because even though the book is launched this is just the beginning of the journey,” Sofie added. “It’s a good milestone for sure, but there’s still a lot of work to come.”

The Day We Die can currently be purchased on Amazon through Kindle or paperback, but the girls said they’re hoping to also make it available in local bookstores and larger retailers like Indigo and Barnes and Noble so they can reach a wider audience.

For more information about the authors or to purchase a copy of The Day We Die, visit www.autumnbluestone.com.