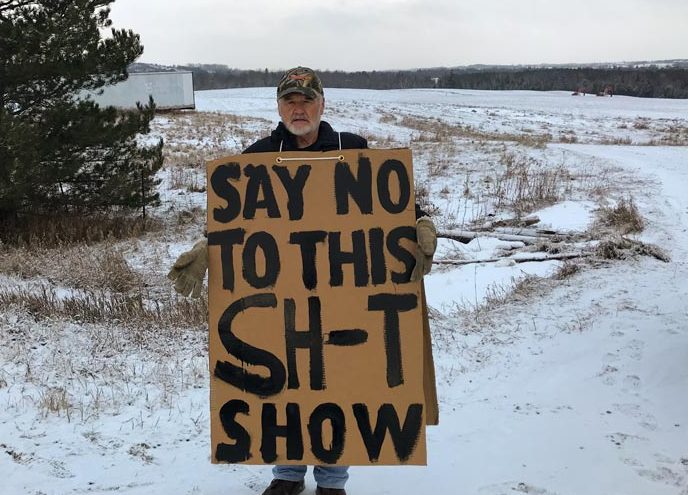 ERIN – An Erin resident is frustrated with the town’s plan to build a wastewater treatment plant and compel its residents to hook up to the system when it’s complete.

Ken Cowling took his frustration to the street last week with a one-man protest.

Cowling marched near the intersection of 10th Line and Wellington Road 52 in Erin – the future site of the plant – on Dec. 22, 23 and 24 for five hours each day wearing a sandwich board that reads “Say no to this sh-t show.”

“It’s the most ludicrous thing,” Cowling said in a phone interview on Dec. 23.

“We are really just subsidizing developers. I have a septic tank; it’s well-maintained. Why should I have to pay for (the sewage system)? I don’t take this easily.”

Cowling said he’s lived in Erin for some 40 years and is aware the sewage plant has been in the works for almost half that time.

He said as a younger man, he didn’t have the time to pay close attention to local government initiatives and this one got past him.

“It’s been pushed along by this present council,” Cowling said.

“And all I did was grumble about it. What I’m doing right now I should have been doing four years ago. All I can do now is what makes me feel right.”

The Town of Erin plans to build a wastewater treatment plant in 2021.

The design is almost complete and is expected to go to council for approval in the new year.

Once approved, the project will go to tender and construction will likely begin in the spring.

The town has said the cost of the plant will be covered by developers. Once the plant is underway, development will follow.

The town is also seeking federal and provincial grants to help defray the cost of hooking up to the system for existing homeowners in the villages of Erin and Hillsburgh.

The town recently launched a website dedicated to the sewage plant, wastewatererin.ca with the most recent information on the project.

There it states: “Environmental impacts have been considered at every stage of this project. We have the strictest requirements in the country.

“The development of the project will allow for growth over 20+ years, in a smart and thoughtful way that protects the values we hold close.”

“I can’t believe the atrocity of what they are proposing,” Cowling said.

“There will be 7.2 million litres of effluent every day. I don’t know how Credit Valley Conservation can allow this to go into the pristine waters of the West Credit River.”

Cowling said he’s been buoyed by the horn honks and thumbs up of passersby as he’s been protesting.

“Every honk gets me through another half hour,” he said. “That’s what’s driving me.”